'Shocking' : Supreme Court On Registering FIRs Under Struck Down Section 66A IT Act; Issues Notice On Plea Seeking Action 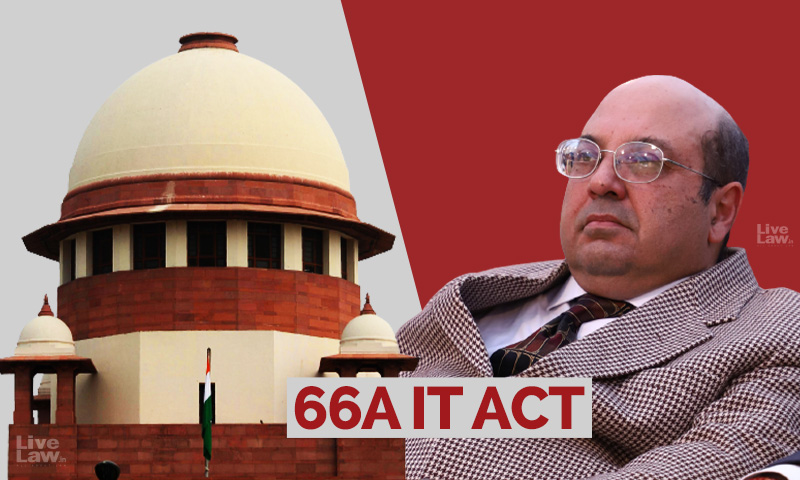 x
"What is going on is terrible", Justice Nariman observed on being told that over 1000s FIRs have been filed after Section 66A was struck down.

The Supreme Court on Monday expressed shock at the practice of police registering FIRs under Section 66A of the Information Technology Act, which was struck down by the top court in the 2015 judgment in the Shreya Singhal case.A bench headed by Justice RF Nariman was hearing an application filed by Peoples Union for Civil Liberties (PUCL) seeking various directions and guidelines against the...

The Supreme Court on Monday expressed shock at the practice of police registering FIRs under Section 66A of the Information Technology Act, which was struck down by the top court in the 2015 judgment in the Shreya Singhal case.

A bench headed by Justice RF Nariman was hearing an application filed by Peoples Union for Civil Liberties (PUCL) seeking various directions and guidelines against the FIRs under the struck down provision of Section 66A.

"Amazing. That's all what I can say. Shreya Singhal is a 2015 judgment. What is going on is terrible", Justice Nariman observed, as soon as the petition was taken.

Senior Advocate Sanjay Parikh, appearing for the petitioner,  said that even after the provision was struck down, over thousands of cases have been filed across the country.

"It is shocking. We are issuing notice", Justice Nariman said.

Attorney General for India KK Venugopal said that even if the provision has been struck down by the division bench, it is still there in the bare act. Only in the footnote it is mentioned that the the SC has struck down.

"In any case, the police are not going to look at the footnote", Justice Nariman said in a lighter veing.

The AG suggested that in bare acts, next to provision, there has to be a mention in brackets that the provision has been struck down.

Justice Nariman asked the Union of India to file a counter-affidavit and posted the matter after 2 weeks. "We will do something", the judge said.

The PUCL has filed the plea directions to the Union of India to collect data of all FIRs registered invoking Section 66 A of the IT Act struck down by Supreme Court in the case of Shreya Singhal vs Union of India.

The NGO is seeking directions to Union of India through the NCRB or any other agency, to collect all the data and information regarding FIRs and investigations where Section 66A has been invoked.

Further, data has also been sought of the pendency of cases in the District Courts and High Courts throughout the country where proceedings under Section 66A are continuing in violation of the judgment in Shreya Singhal's case.

The plea has sought directions to the Registry of the Supreme Court to communicate to all the District Courts throughout the country to take cognizance of the judgment in Shreya Singhal v. Union of India, in all proceedings where Section 66A has been invoked either at the stage of framing of charge or subsequent thereto, so that no person should suffer or face any adverse consequences which violate his Fundamental Rights under Article 21 of the Constitution.

Further, directions have been sought to the Supreme Court's Registry to communicate to all the High Courts (through its Registrar) to collect the information from all the District Courts within its jurisdiction regarding pendency of cases under Section 66A at different stages and issue directions for due compliance of judgment of the top Court in Shreya Singhal.

Further, the petitioner has sought directions to Union of India to publish in all leading news papers, both English and in the official vernacular informing the general public that section 66A of the Information Technology Act having been struck down by the Court is no longer law.

"It is clear that Section 66A  arbitrarily, excessively and disproportionately invades the right of free speech and upsets the balance between such right and the reasonable restrictions that may be imposed on such right", Justice Nariman observed in the judgment.

"The Section is unconstitutional also on the ground that it takes within its sweep protected speech and speech that is innocent in nature and is liable therefore to be used in such a way as to have a chilling effect on free speech and would, therefore, have to be struck down on the ground of overbreadth", the judgment added.