"Right To Question Govt Is The Essence Of Democracy, Sedition Law Should Be Shown The Door As Soon As Possible": Justice Deepak Gupta 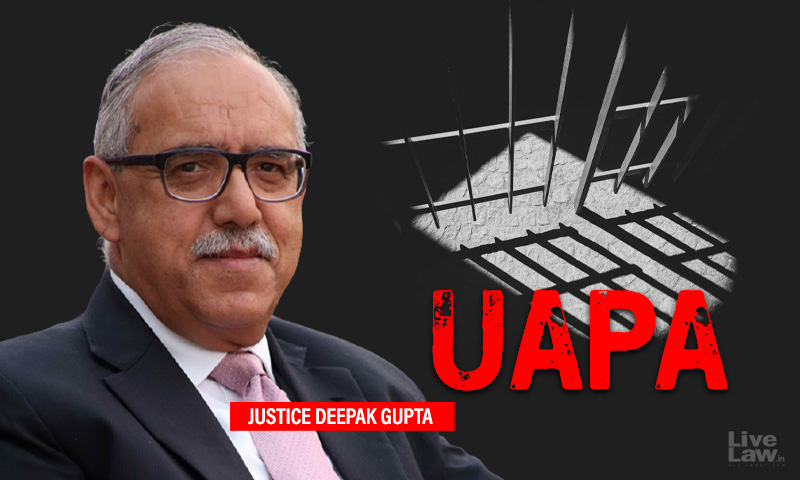 "The time has come that section 124A (of the IPC; on sedition) be held as unconstitutional", said Justice Deepak Gupta on Saturday.The former Supreme Court judge was speaking at a webinar by CJAR- "Discussion On DEMOCRACY, DISSENT AND DRACONIAN LAW- Should UAPA & Sedition Have A Place In Our Statute Books?" In the light of CJI N. V. Ramana's oral observations asking the Centre if it Is...

"The time has come that section 124A (of the IPC; on sedition) be held as unconstitutional", said Justice Deepak Gupta on Saturday.

The former Supreme Court judge was speaking at a webinar by CJAR- "Discussion On DEMOCRACY, DISSENT AND DRACONIAN LAW- Should UAPA & Sedition Have A Place In Our Statute Books?" In the light of CJI N. V. Ramana's oral observations asking the Centre if it Is It Still Necessary To Continue Sedition Law, Which Was Used By British To Suppress the Freedom Movement, Justice Gupta expressed the hope that when the matter challenging the constitutionality of the provision is finally heard by the Court, it will be struck down.

"The right to question the government is the main essence of democracy – I may not agree with you but we can politely agree to disagree with each other. Sedition is the anathema in a democracy where every citizen has the right to question the government. It was introduced by a colonial power and the intention was that no native should raise his voice against the British Raj- they had said that anything which brings about hatred or contempt or incites disaffection or enmity against the State would be sedition. Mahatma Gandhi had said affection cannot be manufactured by law, that if I have no affection for the system or any person, I should have the right to express this, so long as it does not incite violence. But unfortunately, till a few years before the independence, the view taken was that anything that you say is sedition if it is disaffection. The judgement holding that it will be sedition only if there is violence was overturned by the Privy Council", discussed the judge.

Justice Gupta indicated how finally, the Supreme Court constitution bench in 1962 in the Kedar Nath case gave a clear definition of what sedition is, that there must be incitement to violence and public disorder. "Otherwise, your taking part in the farmers' protest, like Disha Ravi, will not amount to sedition!", he remarked.

The judge mentioned that the law as laid down in Kedar Nath has been recently reiterated by a bench headed by Justice U. U. Lalit in Vinod Dua's case, where the Supreme Court quashed the FIR lodged against the senior journalist for sedition and other offences by a local BJP leader in Himachal Pradesh over his YouTube show with critical remarks against Prime Minister and Union Government.

"The clarifications may come and go but the police will keep misusing the law, if they can still lodge 100s and 1000s FIRs under section 66A of the IT Act despite it being struck down by the Supreme Court in Shreya Singhal's case as violative of free speech. In my view, the only reason section 124A was held as constitutional (in Kedar Nath) was by putting it in the straitjacket of incitement to violence. Today, you have so many laws dealing with incitement of violence including the UAPA. In 74, Mrs. Indira Gandhi made the law that it is a cognisable offence. During pre-independence days, it was non-cognisable. You have made it harsher and harsher. My personal view is that so far as the law of sedition is concerned, there is no case whatsoever for retaining it in this country. This law should be shown the door as soon as possible", asserted the judge.