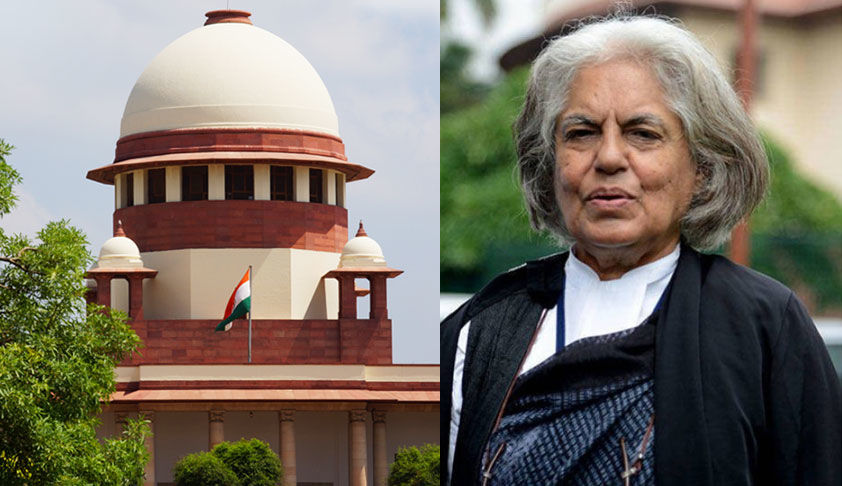 Senior Advocate Indira Jaising has moved an application in the Supreme Court seeking a declaration that the process adopted by certain High Courts to confer senior designations through the process of secret voting of the full court is "arbitrary and discriminatory".The application points out that recently the High Courts of Delhi and Punjab & Haryana resorted to voting process to...

Senior Advocate Indira Jaising has moved an application in the Supreme Court seeking a declaration that the process adopted by certain High Courts to confer senior designations through the process of secret voting of the full court is "arbitrary and discriminatory".

The application points out that recently the High Courts of Delhi and Punjab & Haryana resorted to voting process to confer senior designations. Such voting was done even after marks were assigned to the candidates by the Committee of the High Courts based on the "objective criteria" formulated by the Supreme Court in the 2017 judgment in the case Indira Jaising vs Supreme Court of India.

The voting process by the full court, Jaising argues, defeats the objective and purpose of the 2017 judgment of the Supreme Court which highlighted the need to limit the element of subjectivity in senior designations.

To illustrate her point, the senior counsel refers to the process adopted by the Delhi High Court in conferring 55 senior designations.  87 advocates had cleared the cut-off set by the Committee based on the objective criteria. However, these names were again subjected to a secret voting process of the full court, which resulted in exclusion of 32 candidates.

In this context, Jaising's application says :

Jaising asserts that the Supreme Court had said in its judgment that voting should be resorted to "only" when it is "unavoidable". However, most High Courts use the voting method as a norm and not an exception. She adds that the recent designations given by the Punjab and Haryana High Court also used the voting method.

Clarifying that she is not interested in the outcome of any particular designation or any particular candidate, Jaising says that her concern is to ensure maximum objectivity in the process.

"...the process of designation is a selection of those who are worthy of designation and such merit is not be decided on the basis of full court vote since this is not an election to an office..

When every candidate is put to vote and that too by secret ballot with no discussion, it is obvious that the decision to designate is not based on the merit of the candidate but on the personal preferences of the judges who vote in favour of or against a candidate.

Putting every candidate to vote defeats the very purpose of evaluating the candidate based on the criteria laid down by this Hon'ble Court. If voting is the decisive factor as it seems to be,the marking system as laid down in the above-mentioned objective criteria table becomes of no consequences", her application reads.

The application is moved as a Miscellaneous Application in the writ petition filed by her in 2015 which resulted in the 2017 judgment laying down objective criteria for senior designations.

Therefore, she is seeking a clarification that voting by "secret ballot" on each candidate for senior designation is arbitrary, discriminatory and contrary to the judgment in Indira Jaising vs Supreme Court of India and others.

She also seeks to decide and clarify what should be the uniform minimum number of marks to be obtained by a candidate to be designated as a senior advocate.

Further, a direction is also sought that advertisements inviting applications are issued periodically twice a year as laid down in the Indira Jaising case.

The 2017 judgment on objective criteria for senior designations was delivered by a bench comprising Justices Ranjan Gogoi, RF Nariman and Navin Sinha in the writ petition filed by Indira Jaising.

The judgment suggested objective criteria such as:

The Supreme Court also contemplated test of personality and suitability on the basis of interview / interaction.