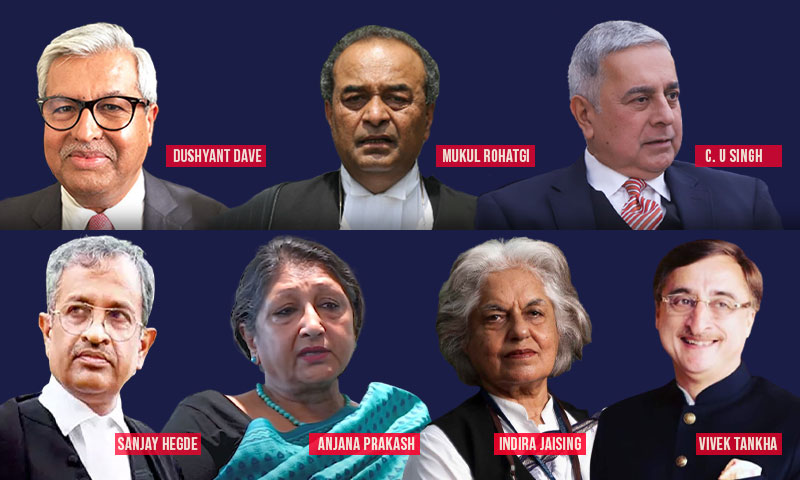 The Supreme Court is being widely criticized within the legal community for its decision to take suo moto cognizance of COVID19-related issues while the High Courts are dealing with the same.Today morning, Chief Justice of India SA Bobde gave clear indications that the Supreme Court wanted to take over the issues from High Courts. The CJI said that six different High Courts dealing the...

The Supreme Court is being widely criticized within the legal community for its decision to take suo moto cognizance of COVID19-related issues while the High Courts are dealing with the same.

Today morning, Chief Justice of India SA Bobde gave clear indications that the Supreme Court wanted to take over the issues from High Courts. The CJI said that six different High Courts dealing the matters have caused "confusion and diversion of resources", though no one has approached the Supreme Court raising such a complaint.

The bench, also including Justices L Nageswara Rao and S Ravindra Bhat, appointed Senior Advocate Harish Salve (who incidentally happened to be in the VC hearing in a case seeking reopening of Vedanta's sterlite plant) as an amicus curiae in the matter.

The Supreme Court's extraordinary move came after the High Courts of Bombay and Delhi made urgent interventions on Wednesday night to ensure supplies of oxygen and medicines to COVID-19 patients, after making certain strong critical observations against the Central Government.

While social media and messenger groups are abuzz with critical remarks against the Supreme Court, LiveLaw reached out to certain senior members of the legal fraternity for their views.

"I completely disagree with the view of the SC. High Courts are competent to deal with the issue as it unfolds in the concerned state. Local conditions and local problems and the solutions can be best addressed by them. It's a retrograde step. High Courts will become redundant now", he said.

Mr.Rohatgi also said that the Supreme Court's order of ad-interim stay on the Allahabad High Court direction to impose lockdown in 5 UP cities to contain the COVID19 surge was wrong.

"Even the ad-interim stay of the Allahabad High Court order was wrong", he added.

"The Supreme Court's suo moto intervention seeking to restrain the High Courts from discharging their constitutional duties is absolutely uncalled for and unjustified, firstly, for the simple reason that the supreme Court has been sitting as a silent spectator to the happenings in the country for the last few months. They should have seen the writing on the wall. The Supreme Court, if at all it was concerned about the citizens, should have intervened suo moto earlier to ensure that the government was functioning properly and that adequate hospitals, vaccines, medicines, oxygen supplies were available for COVID patients. The government has been sleeping and the Supreme Court also has been sleeping unfortunately over this period. Therefore, morally Supreme Court is unjustified in intervening when the High Courts have decided to intervene.

Ultimately, every life matters today. If High Courts' intervention, however unpalatable it might be to the SC judges, can save few lives, then there is no reason that the Supreme Court should intervene. Supreme Court's intervention, far from aiding the citizens and protecting their right to life, is likely to result in loss of lives and in violation of Article 21. The Supreme Court will be well advised to back off"

Dave was also criticized the appointment of Senior Advocate Salve as an amicus curiae in the case and termed it "uncalled for".

"Mr Salve is a very able lawyer and I have no doubt about Salve's abilities. And Salve is a very close friend of Chief Justice Bobde - a child hood friend. There is no reason why Mr Salve should again and again be appointed by Chief Justice Bobde as amicus curiae.  Particularly because, Mr.Salve is not in India.  He has been a non-resident and living in London for a long time. He does not know the realities of India. He does not know the sufferings of Indian people. He does not know the pain of Indians. Whatever be his abilities, frankly Mr. Salve has conflict of interest, because he represents the biggest industrial houses of the country, including Sterlite. Mr.Salve's statement to reopen the Sterlite plant itself frankly disentitles him to carry on as amicus curiae. I am really disturbed that Chief Justice Bode has appointed Mr.Salve as amicus when he is not available in India. There are many many top class, fiercely independent lawyers in this country, and Mr.Salve's proximity to the government of the day is well known. He has appeared to defend the government directly and indirectly in large number of cases during Covid".

Dave further asked "It is a very serious issue why the Supreme Court has intervened. Is it to help the government for it to hide its failures?".

Dave also shared a sense of disappointment that the other judges of the bench do not act when the presiding judge of the bench is doing something wrong.

"I have greatest respect for the Supreme Court. I have immense respect for Justices L Nageswara Rao and Justice Ravindra Bhat sitting on the bench. I must still say, I am deeply disappointed, that judges sitting with the Chief Justice or judges like Justice Arun Mishra, have never been able to stop anything wrong being done by the presiding judge. It is a really sad commentary on the Supreme Court. They must remember -every judge is a judge of the Supreme Court. He is bound by the constitutional oath. The Chief Justice is just the first among the equals. He is not their boss".

"I think it is unfortunate.What was the illegality in the High Court order?As far as I know, despite the hierarchical system of Courts, the High Court is not a subordinate court of the Supreme Court whose every order has to meet the approval of the Supreme Court, as would be required in the bureaucracy.Therefore many in legal circles see the interference akin to the manner in which a superior officer in the bureaucracy gives orders to a subordinate".

"I am surprised that the Supreme Court should seek to step into six separate proceedings being heard on a war footing by six high courts across the country. This comes at a time when over-centralised decision making is widely acknowledged to have failed in the fight against COVID-19. That the Supreme Court should consider itself capable of supervising life and death situations in diverse States, in the same time frame as the concerned High Courts are doing, speaks either of supreme hubris, or of supreme indifference to horrendous human suffering"

Senior Advocate Sanjay Hegde said the the Supreme Court's intervention is likely to undermine the efforts taken by the High Courts to hold the State Governments to account in respect of COVID management.

"Those state governments may now feel emboldened to resist High Courts that seem determined to hold their Covid response to strict constitutional scrutiny", he said.

"As the deadly second wave of the pandemic rages and the virus goes into exponential growth, killing thousands of Indians, we must squarely ask, has the Supreme Court been complicit in the destruction of human life?", he asked.

Senior Advocate and Rajya Sabha MP Vivek Tankha commented in twitter that while the Supreme Court could be in a better position to seek the response of the Union Government on the COVID issues on a national level, the High Courts are better equipped to monitor the matter at the micro level.

He said that the Supreme Court lacks the time and details to deal the challenges facing the states.  "High Court orders enjoy public faith", he said.

SC is best suited to seek replies fr UOI on #COVIDEmergency2021 including #OxygenEmergency nationally. State high courts should be allowed to monitor at micro level. #SupremeCourt has neither time nor details to deal with challenges facing states.HC orders enjoy public faith. 1/2

Senior Advocate Ravindra Shrivastava said that in a federal structure, the High Courts are as competent are as competent and have jurisdiction as Supreme Court, perhaps wider . "They should be trusted", he said in a tweet.

In federal structure which we still retain in the constitution, High courts are as competent and have jurisdiction as Supreme Court , perhaps wider . They should be trusted .#SupremeCourt #NDTVTopStories #CoronaSecondWave #OxygenEmergency

Senior Advocate Shrivastava also criticized the Supreme Court for appointing an amicus in the matter instead of seeking the response of the Attorney General for India.

"It is appalling to see the constitutional office of the Attorney General being undermined. Supreme Court chooses an amicus over the AG to seek assistance. Notice to AG should have gone", he said.

It is appalling to see the constitutional office of the Attorney General being undermined. Supreme Court chooses an amicus over the AG to seek assistance. Notice to AG should have gone . #SupremeCourt

Several young advocates and law students were also seen in social media expressing their disappointment with the Supreme Court's move.