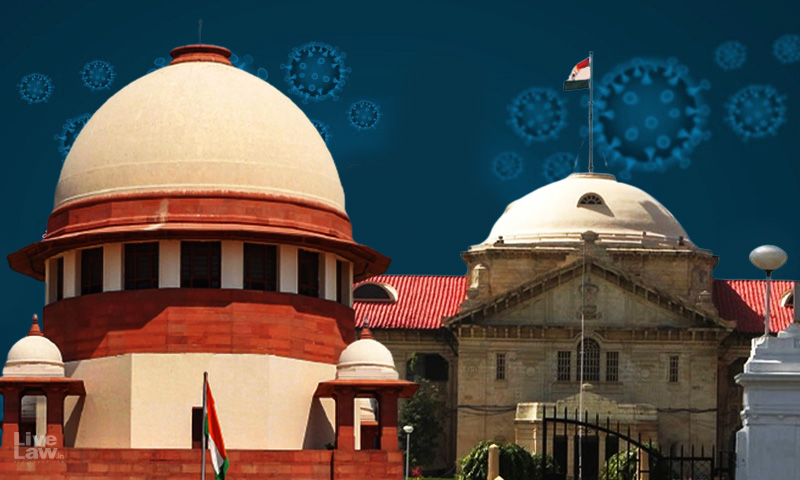 The Supreme Court on Tuesday stayed the Allahabad High Court judgment which directed the Uttar Pradesh Government to impose lockdown in five cities of Prayagraj, Lucknow, Kanpur, Varanasi and Gorakhpur till April 26 in view of the COVID19 pandemic.A bench headed by the Chief Justice of India SA Bobde stayed the operation of the judgment after hearing the arguments of Solicitor General...

The Supreme Court on Tuesday stayed the Allahabad High Court judgment which directed the Uttar Pradesh Government to impose lockdown in five cities of Prayagraj, Lucknow, Kanpur, Varanasi and Gorakhpur till April 26 in view of the COVID19 pandemic.

A bench headed by the Chief Justice of India SA Bobde stayed the operation of the judgment after hearing the arguments of Solicitor General Tushar Mehta.  The Solicitor General had made an urgent mention of the petition before the CJI today morning and requested for hearing of the matter today itself. Agreeing with this request, the CJI-led bench heard the SG after the listed matters were over.

While saying that the State was not objecting to some of the directions issued by the High Court, the SG said that  "to lock down five cities by judicial order may not be the right approach".

The Supreme Court has posted the matter after two weeks. It has sought a report from the UP Government on the steps taken by it in relation to the COVID-19 pandemic. The Court also appointed Senior Advocate PS Narasimha as an amicus curiae to assist it in the matter.

The Allahabad High Court had passed the judgment in a suo moto PIL, after making scathing observations against the UP Government for not taking adequate preparatory measures to deal with the second wave of the pandemic.

The Uttar Pradesh Government however refused to impose the lockdown in the 5 cities as directed by the High Court.

A division bench comprising Justices Siddhartha Varma and Ajit Kumar of the High Court narrated the grim situation of the health care system in major cities of the state, and said that a lockdown was absolutely essential to ensure that the situation was not going completely out of hands.

"Before (the Pandemic) further spirals to engulf in it the entire population of these badly hit districts, it is necessary to take some harsh steps in larger public interest", the bench had said.

"It is a shame that while the Government knew of the magnitude of the second wave it never planned things in advance", said a division bench of Justices Siddhartha Varma and Ajit Kumar in a strongly worded order.

"No concrete plan has yet been chalked out in the light of our observations made in our last order though some efforts of course, have been made to engage some private hospitals to convert them as Covid hospitals, but even there facilities available are not up to mark", the bench said.

The Court narrated the abysmal state of affairs of public health care system in major cities of Uttar Pradesh.

Referring to the statistics of hospital facilities in the capital city of Prayagraj, the Court said that the "medical health infrastructure that the government has developed in the past, can cater to the needs of less than 0.5% of the city population". In villages, the situation is worse.

"If people die of pandemic in a large number due to paucity of sufficient medical aid it would be the governments to blame which failed to counter the pandemic even after one long year of experience and learning.."

"In any civilised society if public health system is not able to meet the challenges and people die for want of proper medication, it means there has been no proper development. Health and education go side-by-side. Those in the helm of affairs of governance are to be blamed for the present chaotic health problems and more so when there is a democracy which means a government of the people, by the people and for the people"

The order reflected the grim situation where recommendations of VIPs are needed for getting COVID-19 tests, remedesivir injections, hospital beds etc.

Only VVIPs are getting reports within 6-12hours, it said.

"We find from the scenario that emerges from the Government Hospitals that admission of patients to ICUs are largely being done on the recommendation of VIPs. Even supply of life saving antiviral drug namely Remdesivire is being provided only on the recommendation of VIPs. VIPs and VVIPs are etting their RT-PCR report within 12 hours, whereas,ordinary citizen is kept waiting for such reports for two to three days and thus, spreading further infection to other members of his/her family".

The Court said that it cannot lose sight of the fact that large number of doctors of King George Hospital and other hospitals like Swaroop Rani Nehru Medical Hospital have gone into isolation after being tested Covid positive. Even the Chief Minister Yogi Adityanath has gone into isolation, the Court noted.

"Public health is the top most priority and call of the moment and any complacency of any degree today will cause havoc to people. We can't shirk away from our constitutional duty to save innocent people from the pandemic which is spreading due to the negligence of a few", it said.

Court records displeasure at the conduct of local body elections

The Court recorded strong displeasure at the way government and the State Election Commission proceeded to hold election forcing teachers and other government staff to perform duties exposing themselves to the threat of pandemic.

"The police was virtually shifted to polling places giving priority to election above public health", it lamented.

"Further the photographs of the various places where elections were held definitely show that no social distancing was maintained. Also we find that on many occasions in various political rallies masks were never worn by people", it added.

The Court directed strict action under the Uttar Pradesh Epidemic Diseases Act and other relevant laws against the organizers of rallies in which people were not wearing masks. The action taken must be placed before the Court on the next hearing date.

"If popular government has its own political compulsions in not checking public movements during this pandemic, we can not remain mere passive spectators", it said.

"One would only laugh at us that we have enough to spend on elections and very little to spend on public health", the Court noted.

"One cannot even imagine what will happen if only10% of the city population gets infected and needs medical help in hospitals. How the government will manage with the presently existing infrastructure is anybody's guess", it observed.

The Court took into account the fact that many doctors and medical staff were infected and the rest were over-burdened. It said that if the pandemic spread is not arrested to give some respite to medical and paramedical staff, "the entire system would collapse and relief will be confined to VIPs and VVIPs".

"We are of the considered view that in given scenario of present time if people are restrained from going outside their homes for a week in the first instance, the current chain of spread of COVID infection can be broken and this will also give some respite to the frontline medical and health workers who would pay more attention to those patients who are already admitted. They would also get some sort of much required short rest as they are getting exhausted", it ordered