Service As Additional Judge On Ad-Hoc Promotion Will Not Count For Seniority Of District Judge : SC [Read Judgment] 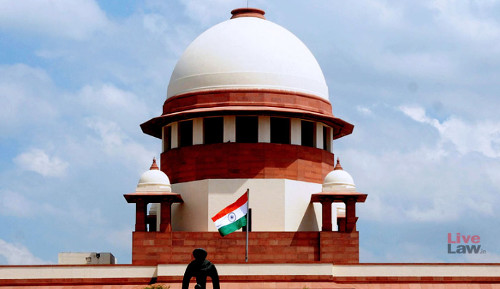 x
The reckonable date has to be the date when substantive appointment is made and not from the date of the initial ad-hoc appointment or promotion, Court held.

While dealing with a challenge against the seniority list of District Judges drawn by the Rajasthan High Court, the Supreme Court reiterated that the period of service as an ad-hoc judge will not count for the seniority of District Judge.A bench comprising Justices U U Lalit and Vineet Saran was dealing with the following issue, among others :"Whether the judicial officers promoted on...

A bench comprising Justices U U Lalit and Vineet Saran was dealing with the following issue, among others :

"Whether the judicial officers promoted on ad-hoc basis as Additional District and Sessions Judges to man the Fast Track Courts in the State and who were substantively appointed to the Cadre of the District Judge, are entitled to seniority from the date of their initial ad-hoc promotion?"

The issue was raised by Rajasthan Judicial Service Officers Association in a writ petition filed against the seniority list prepared by the High Court on March 15, 2019. They sought for reckoning their services as Additional District and Sessions Judges in Fast Track court for determining the seniority as District Judge.

The SC noted that the issue was settled against the petitioners in various precedents such as  :

In Debabrata Dash, it was held :

The corollary of the above rule is that where the initial appointment is only ad hoc and not according to rules and made as a stopgap arrangement, the officiation in such post cannot be taken into account for considering the seniority"

It was further held in these precedents that :

The SC held that these precedents conclude the case of the petitioners.

"As has been held in said decisions, the reckonable date has to be the date when substantive appointment is made and not from the date of the initial ad-hoc appointment or  promotion".

Thus, the Court answered the issue in the negative.

[District Judges] Inter-Se Seniority Among Candidates Who Pass 'Limited Competitive Exam' Must Be Based On Merit In LCE & Not Previous Seniority :SC

Holding thus, the SC interfered with the seniority list to give proper placement for LCE candidates.