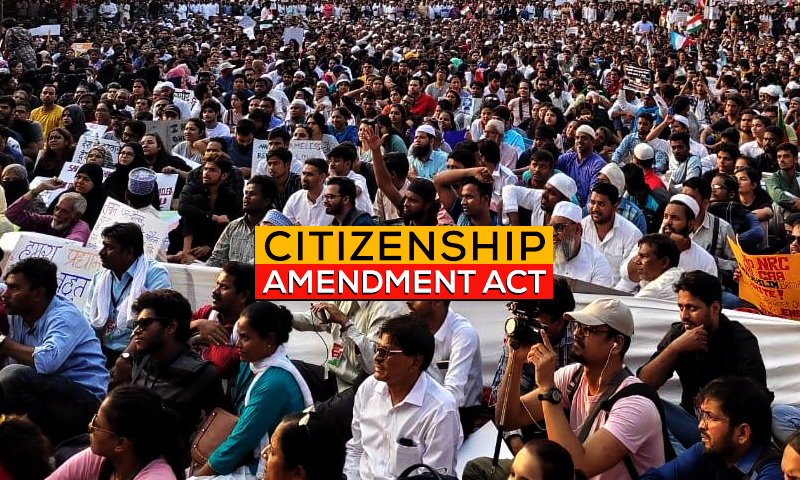 The Student Federation of India has filed a petition under Article 32 of the Constitution of India, challenging the constitutionality of the Citizenship (Amendment) Act, 2019, along with the validity of the power of the Central Government to grant class exemption under Section 3(2)(c) Passport (Entry Into India) Act, 1920, and Section 3A of the Foreigners Act, 1946. Nationwide protests have...

The Student Federation of India has filed a petition under Article 32 of the Constitution of India, challenging the constitutionality of the Citizenship (Amendment) Act, 2019, along with the validity of the power of the Central Government to grant class exemption under Section 3(2)(c) Passport (Entry Into India) Act, 1920, and Section 3A of the Foreigners Act, 1946.

Nationwide protests have taken place over the past month and several petitions have been filed, condemning the Citizenship (Amendment) Act, 2019 as it allegedly provides fast-track citizenship on the basis of religious persecution in Afghanistan, Bangladesh and Pakistan to members of six religious communities: Hindu, Sikh, Buddhist, Jain, Parsi and Christian. It notably leaves out the Muslim community.

The Petition also seeks declaration of certain notifications issued in 2015 and 2016 as unconstitutional, which instituted amendments in the Passport Rules and Foreigners Order, thereby permitting persons who had entered India without valid documents on or before 31.12.2014, from Pakistan, Bangladesh and Afghanistan, and belonging to six religious communities, entry into the country.

The grievances set out in the Petition state that Section 3(2)(c) of the Passport (Entry Into India) Act, 1920 empowers the Central Government to enact rules that can provide exemption either absolutely or conditionally to any "class of persons" from the operation of said Rules.

It is submitted that the aforementioned Section is "ultra vires the Constitution to the extent it grants unbridled power to the Central Government to exempt a "class of persons" from the provisions of the Act.

Similarly, the Petition also impugns Section 3A of the Foreigners Act, 1946. Cases such as In are Delhi Laws Act, 1912 (1951 SCR 747) and Municipal Corporation of Delhi v. Birla Cotton, Spinning and Weaving Mills (1968 3 SCR 251) have been cited to showcase excessive delegation of legislative power.

The Petition goes on to seek declaration of unconstitutionality of the Citizenship (Amendment) Act, 2019 on the grounds that it "is destructive of the concept of secularism, which is an integral part of the basic structure of the Indian Constitution".

The landmark case of S.R. Bommai v. Union of India (1994 3 SCC 1) has been referred to in order to drive home the point. "Hence, such discriminatory access to the path to Indian citizenship would be impermissible even by way of constitutional amendment, much less by way of statute as sought to be done by the Citizenship (Amendment) Act, 2019".

The case of Navtej Johar v. Union of India (2018 10 SCC 1) has been cited to argue that "cases of explicit classification between groups of people based on intrinsic and core traits of individuals (such as gender, religion, sexual orientation etc.) cannot be considered to constitute a reasonable classification satisfying the test of Article 14 of the Constitution".

The Citizenship (Amendment) Act, 2019 is also purportedly infringes Article 21 as the despite being a "procedure established by law", it does not translate into being "just, fair and reasonable" and violates the fundamental right to life.

Interestingly, the Petition also states that discrimination on the basis of alleged religious persecution is not a valid justification and violates the principle of "comity of nations", a well established principle of public international law.

Multiple petitions have been filed, challenging the constitutionality of CAA 2019. The matters are listed to be heard of 22nd January, 2020.