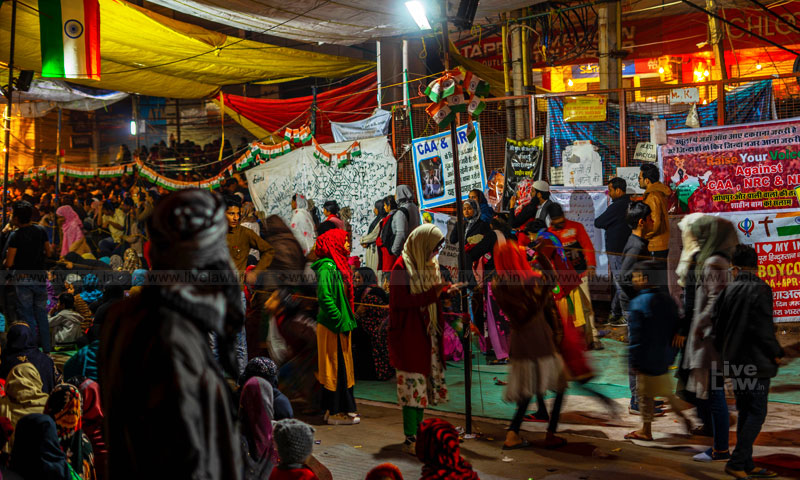 Taking suo motu cognisance of the death of an infant recently in the protests at Shaheen Bagh in Delhi, the Supreme Court on Monday issued notice to the Centre and the Delhi government on the involvement of children in the protests. As the case was taken up, Advocate Sharukh Alam, saying that she was representing three mothers, submitted "Children are being called names, 'terrorist',...

Taking suo motu cognisance of the death of an infant recently in the protests at Shaheen Bagh in Delhi, the Supreme Court on Monday issued notice to the Centre and the Delhi government on the involvement of children in the protests.

As the case was taken up, Advocate Sharukh Alam, saying that she was representing three mothers, submitted "Children are being called names, 'terrorist', 'gaddar' (traitor), 'Pakistani', in school! They come home crying!",

When it was sought to be urged that there are children in detention camps also, the Chief Justice S. A. Bobde replied, "We are not on CAA or NRC or rude behaviour in school! We are concerned with a particular issue!"

"This platform cannot be used for speaking all these things! We will not entertain all this! A child has died! Instead of causing more trouble, mothers should back this cause!", rebuked the CJ.

"A four-month old infant had gone to protest?!", exclaimed the CJ.

"These women live in slums and have no option but to take their children along to the protest site", one lawyer submitted

"The right of children to protest is also recognised under the UN convention...and children are brought along to fairs, jagratas etc where also they could be at a risk of some harm", Advocate Nandita Rao submitted, asking why objection was being taken to children participating in protests alone.

"We have the greatest respect for motherhood and the highest concern for children! We only want to hear legal points! Don't make unnecessary arguments or raise irrelevant submissions to cause guilt or make these kind of explosive comments!...", the CJ observed.

Later, Advocate Sharukh Alam clarified to the bench by submitting :

"Political is personal for them. For these mothers, home is not the kind of safe space as we know it. The protest area is a part of their extended existence. Our lives aren't sanitized, the protest site is a place where the children are dealing with/understanding their lives and realities. And in those situations, they experience slurs and 'gaalis' like being Pakistani".

The bench has allowed Zen Gunratan Sadavarte, the 12 year old recipient of the National Bravery Award this Republic Day, who had written to the CJI about the death of the child, to appear before the bench and make her submission.

Last week she had written to CJI about the death of 4 month old Mohammed Jahaan, who was accompanying his parents at the anti CAA agitations at Shaheen Bagh in Delhi. In her complaint, the seventh-grader has urged the court to frame guidelines to disallow children and infants from participating in protests and agitations, while directing police and appropriate authorities to investigate the death.

Bringing children to such demonstrations is torturous and cruel, especially for new borns who cannot express their pains, and continuing to do so by ignoring the unfavourable weather conditions which further harms the child's health is a violation of child rights and natural justice, read the letter.

Citing an India Today report, the complaint narrated how the 4 month old infant was accompanying his mother to the protests everyday, returned home at 1 am on January 30 and succumbed to severe cold and congestion, according to his mother, in his sleep the coming morning. The cold and congestion occurred "due to exposure to the winter chills at the outdoor demonstration where she used to take him". The parents and the organizer of the protest failed to protect the child's rights due to which Mohammed Jahaan lost his life, alleges the complaint.

It has also been informed that the above report claimed that the child was declared dead on arrival at Alshifa Hospital. In such a case, the course of law must be followed according to the Code of Criminal Procedure but the death certificate fails to note any particular reason for the death. "It was mandatory (to) undergo thorough Medical Investigation including the post mortem with medico legal case", continues the complaint as it seeks for the court to call for the related records and proceedings of the same.