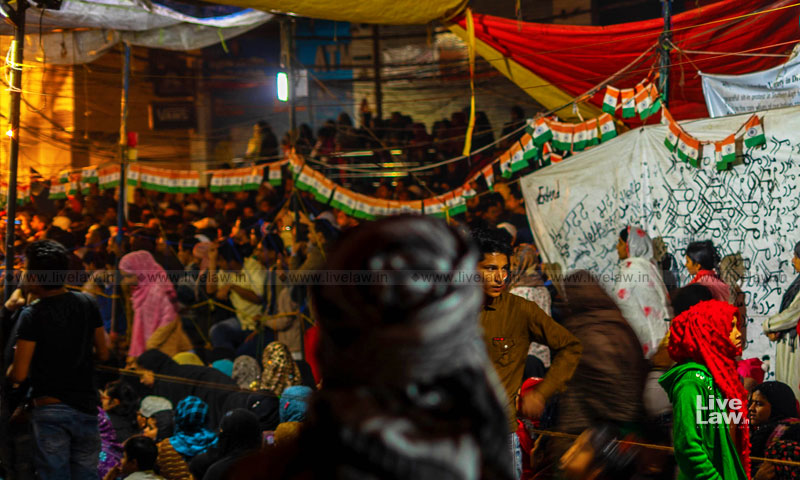 Former CIC Wajahat Habibullah has filed an affidavit in the Supreme Court after visiting Shaheen Bagh and interacting with the protestors at the site.Habibullah has depicted the confluence of different faiths at the protest site and the strong bond between the peaceful protestors, united for the purpose of the common intention of opposing the CAA-NRC-NPR."The ladies at the site include the...

Former CIC Wajahat Habibullah has filed an affidavit in the Supreme Court after visiting Shaheen Bagh and interacting with the protestors at the site.

Habibullah has depicted the confluence of different faiths at the protest site and the strong bond between the peaceful protestors, united for the purpose of the common intention of opposing the CAA-NRC-NPR.

"The ladies at the site include the old, middle aged and young along with little children. The assembly is peaceful."

Noting that the female protestors at the site expressed the intention to bring out certain aspects to the Court, the report lays down the following on behalf of the protestors:-

1) The protests were a way of peaceful dissent against the CAA-NRC-NPR, a legislation, which has struck deep, fear into the hearts of the poor & underprivileged;

2) The protestors saw the CAA-NRC-NPR as a threat to their survival and that of their future generations and came out to protest out of desperation;

3) They have faced blanket threats to theirs lives for their dissenting voices but they continue to protest as their survival is at stake;

4)None of the residents or shopkeepers around Shaheen Bagh have objected to their peaceful protests but in fact have empathized with the cause;

5) They are proud citizens of India and are deeply hurt to have been labeled as traitors/anti-nationals/Pakistani's by the political parties & by the media;

6) They stated that protest site at Shaheen Bagh provides them with security as it is flanked from all sides and emergency vehicles are given immediate and safe passage.

Furthermore, Habibullah states that he had personally inspected the site and barricades.

In doing so, he found, the police on parallel and adjoining roads, had placed barricades even though they were in fact at a great distance & had no connection with the actual protest site.

"It would be in the fitness of things if the police are asked to reveal the names of the persons who were responsible for the decision to block all other parallel & arterial roads on the area and in U.P. instead od carrying out their duty of regulating the traffic on the same"

In his Affidavit, Habibullah has stated that even though the CAA-NRC-NPR is a burning issue and attracting dissent across the length and breath of the country, the Government has not engaged in constructive dialogue with the protestors to understand their concerns, adding that the crushing of dissent instead of entering into a dialogue is the new norm and also alien to or constitution.

Illustrating that he had seen an emergency vehicle been given immediate safe passage by those protesting on the site, Habibullah has elucidated that various roads have been blocked by the police unnecessarily in his report. These include the 40 ft road as well as main road leading to Jamia, New Friends Colony etc. from the roundabout of Kalindi Kund Metro station, blockades to the Okhla, access to Noida on the Expressway to Delhi & Faridabad and access from Akshardham Temple on the Yamuna Bridge among many others.

The Shaheen Bagh Protests have been going on for more than two months as a voice of dissent against the CAA-NRC-NPR.

On February 7th 2020, the Supreme Court had issued notice on a plea seeking clearance of Shaheen Bagh Protestors from Delhi but had refused to pass any directions in that regard.

On 17th February, a Mediation Panel comprising of Senior Advocate Sanjay Hegde and Advocate Sadhna Ramachandran was set up by the Supreme Court to engage in a dialogue with the protestors on site.

"Blocking traffic and causing inconvenience is our concern. My concern is if everybody starts blocking roads, maybe due to genuine concerns, where does it stop"