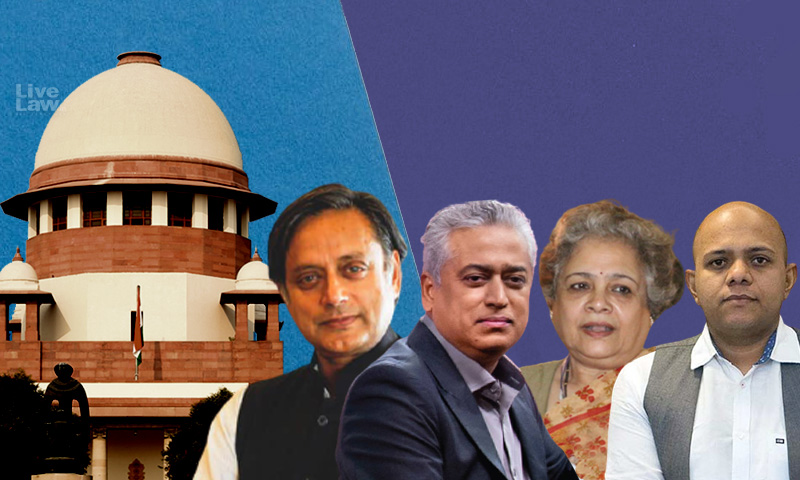 The Supreme Court on Tuesday stayed the arrest of Shashi Tharoor MP, journalists Rajdeep Sardesai, Vinod K Jose, Mrinal Pande, Zafar Agha, Anant Nath and Paresh Nath over multiple FIRs registered against them over their tweets/reports about a farmer's death during tractor rally.A bench headed by the Chief Justice of India SA Bobde passed the order while issuing notice on the...

The Supreme Court  on Tuesday stayed the arrest of  Shashi Tharoor MP, journalists Rajdeep Sardesai, Vinod K Jose, Mrinal Pande, Zafar Agha, Anant Nath and Paresh Nath over multiple FIRs registered against them over their tweets/reports about a farmer's death during tractor rally.

A bench headed by the Chief Justice of India SA Bobde passed the order while issuing notice on the writ petitions filed by them. The bench will consider the petitions after two weeks.

When the matter was taken, the CJI said that the bench will issue notice on the petitions.

"This seems to be covered by the other case", the CJI said, seemingly referring to the precedent in the Arnab Goswami case.

The bench was initially reluctant. But Sibal persuaded by saying that the police from different states can land up at the house of the petitioners to arrest them.

The Solicitor General requested for a posting tomorrow.

"Not tomorrow. We will have it after two weeks. We will stay the arrest", the CJI said.

Meanwhile, Senior Advocate Mukul Rohatgi, appearing for the editor of 'The Caravan Magazine', Paresh Nath, submitted that the FIRs were baseless.

"Where is the crime about reporting? Where is the question of religious sentiments being hurt?", Rohatgi submitted. He added that the report about protester being shot dead was corrected immediately.

The SG interjected to submit that he can show the "horrendous effect" the tweets in question can have on lakhs of online followers.

The bench then intervened to state that it was issuing notice returnable within two weeks and was staying arrest in the meantime.

"All of you argue on the returnable date", the CJI told the lawyers.

Multiple FIRs have been registered against them alleging sedition, creation of communal disharmony etc in States of UP and MP.

One First Information Report (FIR) was filed in Noida and four FIRs in Madhya Pradesh's Bhopal, Hosangabad, Multai and Betul. The FIR in Noida was filed on a complaint by a resident of the city near Delhi, who alleged "digital broadcasts" and "social media posts" by Mr Tharoor and the journalists, who claimed that a farmer had been shot dead by the Delhi Police, contributed to the siege of the Red Fort and violence during the tractor rally.

In the First Information Report filed in Delhi on a complaint by city resident Chiranjiv Kumar, the police said Mr Tharoor and the others misled people on the death of a protester in central Delhi's ITO when thousands of farmers entered areas in the national capital, including the Red Fort, that were not in the agreed route of the tractor rally.

The FIR stated that the accused, through their "fake, misleading and wrong" tweets, tried to imply that the death of the farmer was caused by the violence committed by Delhi Police under directions of the Central government.