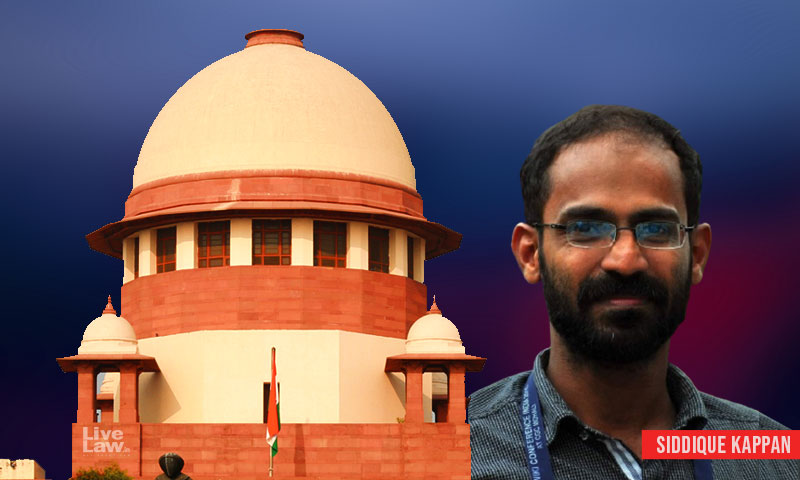 The Kerala Union of Working Journalists has sought an independent enquiry by a retired Supreme Court Judge, to determine the facts connected with the alleged illegal arrest and detention of journalist Siddique Kappan by Uttar Pradesh police while he was proceeding to report the Hathras crime. The prayer has been made in a rejoinder affidavit filed by the organization...

The Kerala Union of Working Journalists has sought an independent enquiry by a retired Supreme Court Judge, to determine the facts connected with the alleged illegal arrest and detention of journalist Siddique Kappan by Uttar Pradesh police while he was proceeding to report the Hathras crime.

The prayer has been made in a rejoinder affidavit filed by the organization through Advocate Shree Pal Singh, wherein it is alleged that the averments made by the UP Government in its reply to the habeas corpus plea seeking Kappan's release, are "false and frivolous".

"Considering the seriousness of the false and frivolous allegations against Mr. Kappan, his continuous illegal detention for 56 days, implicating him in UAPA and other allegedly serious offenses on basis of some newspaper reports, the Deponent seeks an independent enquiry by a retired Judge of this Hon'ble Court to determine the facts connected with the illegal arrest and detention of accused, including the violation of the mandatory guidelines of this Hon'ble Court in D K Basu v. State of West Bengal," the rejoinder states.

Firstly, it is alleged that the UP Police has wrongly mentioned the time of Kappan's arrest as 4.50pm instead of 10.20am in the arrest memo.

"The video footage of this place/area will establish the incorrect facts submitted by the respondent and will affirm the correctness of the statement of the deponent. It is also a very disturbing fact that what prevented the respondents from releasing the accused on bail, as the offences /allegations against the accused are of bailable in nature," it submitted.

It is further alleged that the UP Government has falsely claimed that "incriminating material/ pamphlets have been recovered" from Kappan whereas in reality, there was no such recovery.

The organization has alleged that Kappan has been subjected to custodial torture, and he was "beaten with lathi three times on his thigh, slapped three times after taking out the spectacles, dragged, forced to stay awake from 6 PM to 6 AM depriving him of the sleep, without proper medicines, along with serious mental torture from 5.10.2020 to 6.10.2020."

Further it is alleged that Kappan was allowed to speak to his family after 29 days of his arrest, in total breach of guidelines issued by the Supreme Court in the DK Basu case.

In may be noted that the organization had alleged that Kappan was prevented from signing a vakalatnama for authorising his counsel. Denying this allegation, the UP Government had in its affidavit claimed that "no lawyer has ever approached the jail authorities with a Vakalatnama to be signed by the accused Siddique Kappan till date."

Disputing this submission, the Petitioner-organization has now submitted, "the visit of Advocate Wills Mathews, requesting for a meeting with the accused in Jail on 16.10.2020 can be proved by cross checking it with the video recordings of the Jail premises."

Another objection raised in the matter is that the counter affidavit on behalf of the UP Government has been filed by Senior Superintendent of District Jail, Mathura. The Petitioner has submitted that the same should have been filed by a Police officer having the knowledge about the facts of the case/ arrest/ detention/ investigation etc.

In the backdrop of these submissions, the Petitioner organization has relied on the Supreme Court's recent verdict in the Arnab Goswami case, where it was held that "the doors of this Hon'ble Court cannot be closed to a citizen who is able to establish prima facie that the instrumentality of the State is being weaponized for using the force of criminal law."

"If State Govts Targets Individual They Must Realise That SC is Here To Protect Them": Supreme Court Grants Interim Bail To Arnab Goswami

So far as maintainability of the writ petition is concerned, it has been submitted that "It is a settled position of law that where a person or organization bringing a habeas corpus petition has some demonstrable interest or relationship to the involved persons and is acting in a bona fide manner for the protection of human rights, a habeas corpus will be maintainable."

It is urged that the State has a "constitutional duty" to uphold free speech, to act in a fair, just and reasonable manner, and, to protect the life and liberty of all persons. In this case, it is said, this responsibility extends beyond a single individual and relates to the freedom of the media to discharge their duty without fear or favour.

Following his arrest, the Kerala Union of Working Journalists (KUWJ) filed a habeas corpus petition in the Supreme Court challenging Kappan's custody. The KUWJ argued that the arrest was illegal and unconstitutional.

When the issue came up for hearing on November 20, the bench led by Chief Justice SA Bobde recorded the statement of the Solicitor General, who appeared for the State of Uttar Pradesh, that there was no objection to Kerala journalist Siddiqque Kappan meeting a lawyer while in jail to sign a vakalatnama.

SG Tushar Mehta denied the allegations of the petitioner that Kappan was denied access to a lawyer.

During the brief hearing on Friday, CJI SA Bobde also remarked that he was unhappy with the inaccurate reporting that the Court had refused relief in the case.

On October 12, a bench lead by the Chief Justice of India expressed disinclination to entertain the petition and suggested to Sibal (who was appearing for KUWJ) that the petitioner should approach the High Court.

Later, the KUWJ filed an interim application in the habeas petition seeking permission for regular VC meetings of Kappan with his family members and lawyers after the Chief Judicial Magistrate, Mathura, refused such permission.