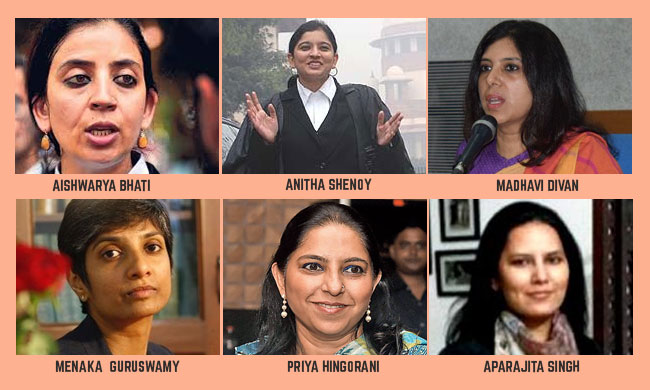 Today, the Supreme Court designated 37 advocates as senior advocates.Six women feature in that list. They are :Madhavi Goradia DivanAnitha ShenoyAparajita SinghMenaka GuruswamyAishwarya BhatiPriya HingoraniMadhavi Divan is at present an Additional Solicitor General in the Supreme Court. She was appointed ASG on December 17, 2018 and will hold office till June 30, 2020. Advocate Divan obtained...

Madhavi Divan is at present an Additional Solicitor General in the Supreme Court. She was appointed ASG on December 17, 2018 and will hold office till June 30, 2020. Advocate Divan obtained her law degree from Pembroke College, University of Cambridge, UK, and began her practice in the Bombay High Court. She has since represented two state governments—that of Gujarat and Madhya Pradesh—while also being recognised as an accomplished author.

Anitha Shenoy is a 1995 graduate of National Law School of India University, Bangalore and has been the standing counsel for State of Karnataka in the Supreme Court for long.

Menaka Guruswamy is a 1997 graduate of National Law School of India University, Bangalore. She read law as a Rhodes Scholar at Oxford University where she was awarded a Doctor of Philosophy in Law (D. Phil.) and as a Gammon fellow for a Masters in Law at Harvard Law School.  She has worked as a human rights consultant to the United Nations and has taught at the New York University School of Law. In the Navtej Johar case which decriminalised homosexuality,  Guruswamy represented IIT students and graduates who belong to the LGBTQIA community. She had also assisted the SC as amicus in the Manipur extra-judicial killings case. She has the rare honor of having her portrait unveiled at Rhodes House in Oxford University. Her name was included in the Forbes list of 2019 trailblazers.

Aishwarya Bhati is an Advocate on Record. In year 2017 she was appointed as AAG of Uttar Pradesh in Supreme Court. Bhati described the senior designation as a "dream come true" and that she was conscious of the "great responsibility" that comes with the designation.

Priya Hingorani has been in active law practice since the year 1990 when she was enrolled as an Advocate with the Bar Council of Delhi. Her primary practice has been in the Supreme Court of India, and has also appeared in the High Courts of Delhi, Kolkata, Mumbai, Punjab & Haryana, Odisha, Jharkhand, Bihar, Uttarakhand and Jammu & Kashmir as also Tribunals and subordinate Courts. She has handled matters pertaining to diverse fields of law, including taxation, customs and excise, insurance, family and matrimonial law, commercial law, labour and service law, human rights and constitutional law.

Aparajitha Singh was a junior to Senior Advocates Harish Salve and U U Lalit, before starting independent practice. She had assisted the apex court as amicus curiae to suggest measures for curbing air pollution, which led to the ban of sale of BSIII vehicles since April 2017. She was also part of a committee which had suggested a common working plan on rehabilitation of destitute widows.