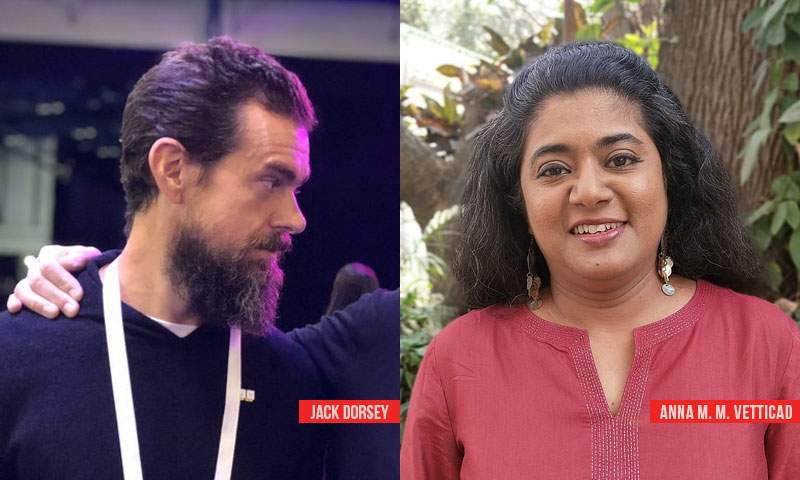 The Rajasthan High Court on Tuesday quashed the First Information Report (FIR) registered against Twitter CEO Jack Dorsey and film critic Anna M Vetticad over holding a poster stating "Smash Brahminical Patriarchy" in 2018.The FIR was registered against them for offences under Sections 295-A, 500, 501, 504, 505 and 120-B of the Indian Penal Code alleging that the poster offended...

The FIR was registered against them for offences under Sections 295-A, 500, 501, 504, 505 and 120-B of the Indian Penal Code alleging that the poster offended religious sentiments and created communal disharmony.

The High Court allowed their plea to quash the FIR noting that the slogan cannot be "construed as having any direct link with the religious sentiments of any section of society".

"The phrase which has been castigated as offending in the FIR, may be construed as laying a challenge to the sociological concepts of a particular section/gender of the Brahmin community, but by no stretch of imagination can it be perceived that these words can even remotely be considered as hurting the religious sentiments of any citizen of India nor the same can be interpreted as creating a religion based rift in any section of society.

The words in the poster at best convey the feelings of the concerned person regarding being strongly opposed to the Brahminical Patriarchal system and desirous of denouncing the same.

Whether or not to follow or oppose the patriarchal system in the society is a matter of personal choice and cannot be thrust down anyone's throat", observed Justice Sandeep Mehta while allowing the petitions filed under Section 482 of the Code of Criminal Procedure.

"I am of the firm opinion that allowing investigation of the impugned FIR to be continued is absolutely uncalled for. Without any doubt in the mind of this court, the impugned FIR does not disclose necessary ingredients of any cognizable offence so as to warrant its registration and investigation in furtherance thereof"

Senior Advocate Mahesh Jethmalani, who appeared for Jack, submitted that his client did not aim at hurting sentiments of any community. At a social event, an unknown lady came and presented the poster to Jack, who just held it, and this happened to be photographed.

Advocate Nishant Bora, appearing for Anna Vetticad, submitted that she inadvertently posted the photograph in Twitter without any intention to hurt any sentiments. Bora also undertook that his client would tender an apology on her account for "placating the sentiments of the complainant or any other person, who may have been offended thereby".

The FIR was registered on the basis of a complaint filed by one Rajkumar Sharma, who alleged that the picture maligned the Brahmin society at large and was likely to  induce religious hatred towards the Brahmin community as a whole.

It was claimed that Brahmin community is highly respected in the society at large as it was responsible for formulation of social rites and customs.

"Various Shastras were the original creation of Brahmins, who were keeping the Indian culture alive since ages. Politicians, social workers, artists, industrialists etc. usually seek guidance and blessings from Brahmins before beginning any auspicious work", the complainant stated.