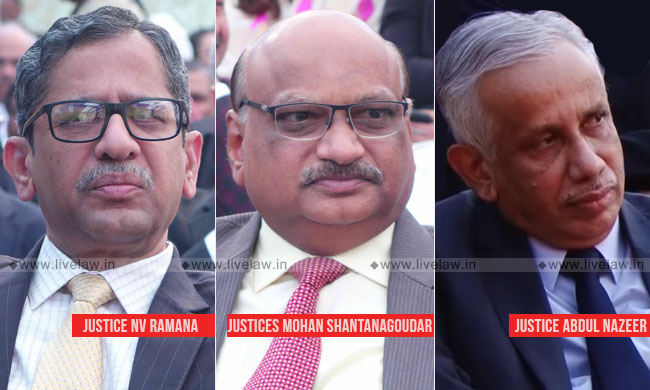 "On receipt of a mercy petition, the Department concerned has to call for all the records and materials connected with the conviction."

The Supreme Court has observed that solitary confinement of a person sentenced to death prior to the rejection of mercy petition is palpably illegal.

The bench comprising Justice NV Ramana, Justice Mohan M. Shantanagoudar and Justice S. Abdul Nazeer upheld the Punjab and Haryana High Court judgment that had commuted death sentence awarded to a murder accused whose mercy petition was rejected by the President of India in 2013.

The Death sentence awarded to Dharam Pal, in a murder case, was affirmed by the Supreme Court in the year 1999. His petition seeking pardon, filed in 1999, was rejected by the President in the year 2013. The Punjab and Haryana High Court allowed his writ petition and commuted the death sentence to life imprisonment in light of the change in circumstances- his acquittal in the rape case, which was an important deciding factor by this Court in negating his appeal and delay in deciding his mercy petition by the President, among other ground.

In this proceeding, the centre admitted that Dharam Pal remained in solitary confinement for a period of 18 years, and has undergone imprisonment for a total period of more than 25 years till date. Referring to Sunil Batra judgment, the bench observed that even if the Sessions Court has sentenced the convict to death, subject to the confirmation of the High Court, or even if the appeal is filed before the High Court and the Supreme Court against the imposition of death punishment and the same is pending, the convict cannot be said to be "under sentence of death" till the mercy petition filed before the Governor or the President is rejected.

In this regard, the bench observed:

The court also upheld the High Court observation that the prolonged delay in execution of a sentence of death has a dehumanizing effect and this has the constitutional implication of depriving a person of his life in an unjust, unfair and unreasonable way so as to offend the fundamental right under Article 21 of the Constitution.

The bench, taking into account all circumstances, finally directed his release after the completion of 35 years of actual imprisonment including the period already undergone by him.