Special Courts For MP/MLAs : Supreme Court To Examine If Cases Triable By Magistrate Can Be Committed To Sessions Court 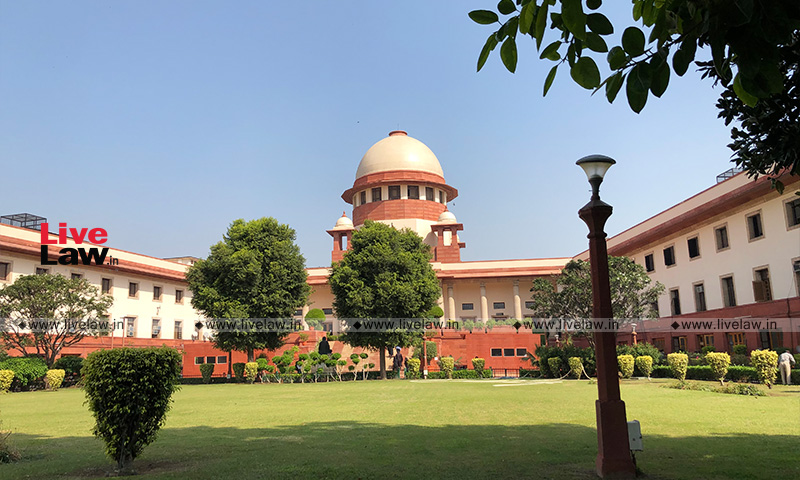 The Supreme Court on Monday orally observed that when a statute states that the trial has to be before a Magistrate, Supreme Court court in exercise of its jurisdiction under Article 142 cannot then say that notwithstanding the statute, the jurisdiction will be exercised by Court of SessionsA Bench comprising CJI NV Ramana, Justice DY Chandrachud and Justice Surya Kant made the observation...

The Supreme Court on Monday orally observed that when a statute states that the trial has to be before a Magistrate, Supreme Court court in exercise of its jurisdiction under Article 142 cannot then say that notwithstanding the statute, the jurisdiction will be exercised by Court of Sessions

A Bench comprising CJI NV Ramana, Justice DY Chandrachud and Justice Surya Kant made the observation while hearing pleas filed seeking directions for directing the setting up of a Special Magistrate Court in Rampur, Uttar Pradesh for trying the matters relating to MPs and MLAs.

The legal issue at hand before the Court relates to jurisdiction of the Special Courts to try criminal cases relating to legislators, which has been challenged stating that matters triable by Magistrate cannot be tried by special judge Court presided by District Judge Cadre officer as it will deprive the accused of right to appeal.

The observation was made in response to submissions made by Amicus Curiae in the matter, Senior Advocate Vijay Hansaria, that if under a statute special courts can be constituted at sessions level as first court with right to appeal before High Court, such as the Special Courts under POCSO Act and Prevention of Corruption Act,  the Supreme court under Article 142 can also do the same thing.

Justice Chandrachud responded to his submissions stating that there are 2 distinct issues involved in the present matter: one being Supreme Court's jurisdiction to designate Special Courts and second the nature of jurisdiction that special judge would exercise.

Justice Chandrachud observed that the jurisdiction of the top Court under article 142 can direct that a designated special judge will try a particular class of cases. He cited the example of coal block allocation cases being allocated to Special Courts.

"Constitution of special court per se there's no difficulty at all. That's open to this court under 142. That's what coal block allocation cases say," he said.

However he added that what nature of jurisdiction that special judge exercises is a different issue. It is determined by the statute, and can't be altered by a direction under Article 142.

"That jurisdiction has to be according to statute, either under the CrPC or if there's a special Act like SC ST Act or PC Act it will have to conform to the statute," Justice Chandrachud said.

Justice Chandrachud further added that Section 377 of CrPC provides for an appeal to sessions judge against an order passed by Magistrate and to the High Court against order passed by Sessions court.

Justice Surya Kant stated that as far as the coal allocation matters are concerned, Supreme Court had specifically noticed that in every case, the offence under Prevention of Corruption Act was involved.

"PC Act as a special statute prescribe that the offences are triable by Sessions Judge. That cannot be a case where jurisdiction is vested with a Magistrate, that will amount to amending CrPC with a judicial order," Justice Kant said.

Mr Sibal argued that offences as far as the present case is concerned is triable by Magistrate but through an administrative order they have been committed to Sessions judge.

"In Allahabad High Court, they haven't assigned any Magistrate Court. You can try MLA MP matter in special courts but you can't take away my right of appeal given under the statute. This court in its orders has said these matters have to be heard by magistrate court so that appeals can be filed."

"This is going on since 2019, there are many case which have been transferred to sessions court all over the country." Mr Hansaria, assisted by Advocate-on-Record Sneha Kalita,  said.

Responding to Mr Sibal's argument that their right of appeal is lost, Mr Hansaria submitted that there are special courts under POCSO and SC- ST Act at sessions level. He added that there is no denial to appeal, as the first appeal will go to High Court, instead of sessions court.

According to him, if a statutory special court can be constituted at sessions level as first court with right to appeal before High Court, this court under Article 142 can also do the same thing.

"This case has been going on since 2019, all over the country there are over 2000 cases which have been transferred from Magistrate court, trials are going on and final orders have been passed," Mr Hansaria said

The Bench was hearing three applications filed by Samajwadi Party leader and MP Azam Khan, MLA Tazeen Fatima and their son Abdullah Khan seeking directions in the case Ashwini Upadhyay versus Union of India, in which the Supreme Court has been passing directions to expedite the trial of cases against sitting and former legilsators by constituting special courts.

During the hearing, the Solicitor General of India Tushar Mehta mentioned that the Madras High Court's committee has expressed doubts over the validity of Special Courts for MP/MLAs, observing that Special Courts can only be "offence-centric" and not "offender-centric".

"Madras HC has also raised concern cos some cases are triable by Magistrate & cannot go before sessions judge & enough magistrate courts haven't been created as said by this court. All cases are focused in Chennai only. People from 700km and report", the Chief Justice of India then said.

"They(Madras HC) go a step further & say your Lordships couldn't have directed particular class of cases by one special only for MP MLA. Which is a wrong notion, I'd be arguing", the Solicitor General said.

CJI said that the bench does not agree with the Madras view. "That we don't agree", he said.

The Court will consider the matter further on November 17.

"One issue is jurisdictional issue. Second is logistical issue, we won't focus on this, we'd clarified in subsequent orders, we had directed & granted Liberty for high courts to constitute courts, etc..we will see on Wednesday", the CJI said.

The pleas have been filed seeking directions for the institution and setting up of a Special Magistrate Court in Rampur, Uttar Pradesh for trying the matters relating to MPs and MLAs.

The petitioners have also moved an application before the top Court seeking transfer of the trial proceedings against them in forgery case from Special Judge, MP/MLA Court to a Magistrate Court having jurisdiction.

It has been argued that the cognizance taken by the Special Judge, MP/MLA Court, Additional Sessions Judge, Rampur is bad in law and should not have been taken for want of jurisdiction.

According to petitioners, the Special Judge lacks jurisdiction to try the offences against them as all the offences alleged to have been committed by them in the FIRs are triable by the Court of Magistrate.

"That the unfair circumstances of the conduct of the trial is entirely prejudicial to the rights of the Petitioner herein, who is likely to be saddled very soon with a verdict from a court lacking jurisdiction," the petitioners have argued.