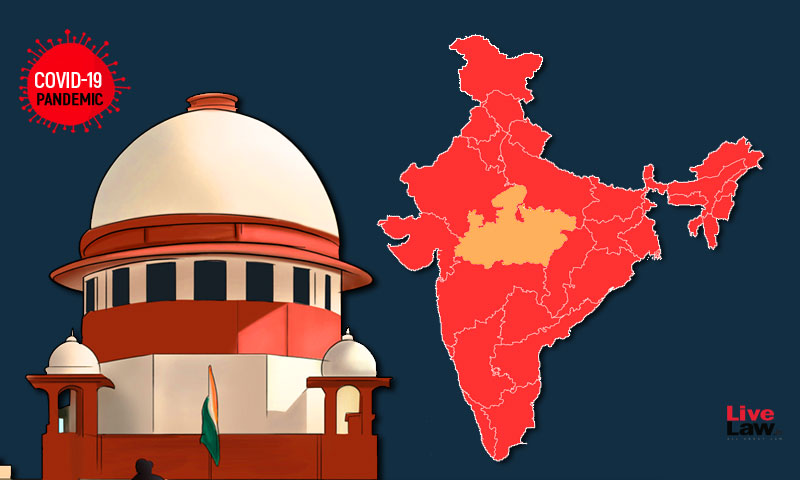 A petition has been filed in the Supreme Court for a direction to the Centre and the MP government to constitute a High Level Expert Monitoring Committee for the state, to, inter alia, secure medical assistance to every sick person, provide adequate number of PPE Kits to health workers, set up testing labs in remote areas and increase the quantum of tests. The petitioner Chinmay Mishra, who...

A petition has been filed in the Supreme Court for a direction to the Centre and the MP government to constitute a High Level Expert Monitoring Committee for the state, to, inter alia, secure medical assistance to every sick person, provide adequate number of PPE Kits to health workers, set up testing labs in remote areas and increase the quantum of tests.

The petitioner Chinmay Mishra, who is the president of the Madhya Pradesh Sarvodaya Mandal, has averred that "Madhya Pradesh is one of the most affected states from Corona virus", that "the Capital Bhopal and Financial Capital Indore are most affected cities in Madhya Pradesh, that "till 15.04.2020 there are 1053 positive cases of Corona Virus in Madhya Pradesh out of which in Indore 646 cases and in Bhopal 170, and "that Indore is having the worst mortality rate in entire country due to Covid 19".

"The situation is beyond the stage of redemption. The state machinery has utterly failed to handle the situation and there is total lack of information and transparency in State of Madhya Pradesh", it is lamented

"The State of Madhya Pradesh is suffering from a political crisis. There has been change in the government and the new chief Minister was sworn in on 23.03.2020 only. But till date there is neither any cabinet in existence nor is there any health minister. Rather there is only the Chief Minister and no other minister is holding office. So, during this critical period, there is no political leadership exist to check and guide the work of the bureaucracy", the petitioner iterates.

"The State Government, in this time of unprecedented global health emergency, does neither have a proper administrative structure nor a concrete plan and system to cope with this pandemic. The State does not have a health Minister and even the officers responsible in the department have been reported unwell", the petition continues.

Further, it is pointed out that the State does not have any expert committee in place with medical experts of experience to cope with the pandemic, and the government is, unfortunately, dependent on the task force formed by the ruling political party, comprising of only political leaders and no experts.

"The State Administration neither has adequate laboratories to test for Corona Virus, nor has adequate number of testing kits, which results in the less number of tests and higher risk of spread of the virus...the state government does not have adequate testing infrastructure even in Indore, Bhopal and Ujjain, which are marked as Red zones. Ujjain does not have a single lab...the samples from Indore are still being sent to other places for testing, which is taking 4-5 days leading to deterioration in the condition of patient of this fatal disease...even after the 22 days of lockdown, the Rapid Antibody testing kit is still wanting, which shows nothing but the clear failure of the State Administration in dealing with the issue", it is submitted.

"Several newspaper reports show that during this extreme situation, the State Administration failed to provide even basic health care services to the people and many individuals unfortunately died because of non-availability of health care facility in public as well as private hospital, even after the enforcement of ESMA Act...the central government as well as the Supreme Court emphasised on the special care for nutrition of Children and Pregnant women, unfortunately the state also failed to do so", it is advanced.

The petitioner has submitted that there is no data/press release/status report from the State Administration which shows that special arrangements have been made for the labour from the unorganised sector, the homeless persons and the destitute. Besides, it is stated that the March 25 press note uploaded on the government's official website, announcing certain benefits to the vulnerable section of society, also only covers the workers of organised sector.

"Non-availability of essential facilities food, water and proper sanitation in the hospitals and quarantine centres is reason why patients run away", it is urged.

"the State Administration is bound to provide ration and food to the needy but unfortunately failed on this aspect also, which leads people to violate the curfew to arrange food for their family", it says further.

The shameful incident where a pregnant woman and her child died because of non-availability of treatment is quoted. Another case of a lady forced to carry the dead child in her womb for four long days after several hospitals refused treatment is cited.

It is pointed out that the State of Madhya Pradesh issued an order on March 14, directing the concerned authorities to provide take-home ration to children in the age group of 3 to 6 years. But the ground reality is that no ration is available for children of 6 months to 3 years and for pregnant women because all the Anganwari centres are shut down.

"The non-availability of ration at public distribution shops might lead to a situation of starvation in the state. There is no order/notification/circular issued to overcome with these difficulties till date...There is no announcement for any relief with respect to safe shelter and food to the over 37000 homeless families in the state", claims the petitioner through advocate Sarvam Ritam Khare.