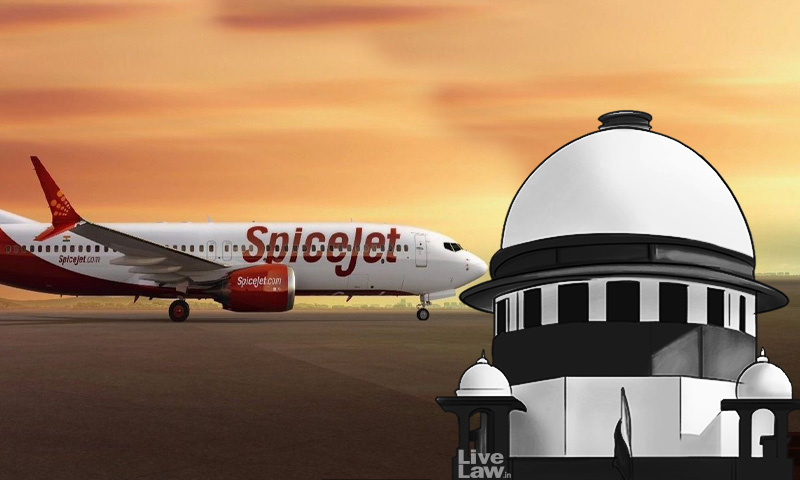 The Supreme Court on Thursday heard the plea of airline company SpiceJet Ltd., challenging the winding order passed by the Madras High Court on Thursday. The airline company stated that it had reached a settlement with the creditor and agreed to withdraw the Special Leave Petition filed against the Madras High Court's winding up order. The matter was listed before the bench of Chief Justice N.V. Ramana, Justice Hima Kohli and Justice C.T. Ravikumar.

Briefly, the background of the case is that a company petition was filed by Credit Suisse AG, a Switzerland based Stock Corporation and a creditor, against SpiceJet, alleging inability on the part of the Airlines to pay the debts owed to the former. Accordingly, the Madras High Court had passed a winding up order in December 2021 against SpiceJet. The single bench of Justice R. Subramanian had directed the Official Liquidator to take over the company assets. However, in January 2022, the Supreme Court had stayed the publication of the winding up order, after SpiceJet's counsel, Senior Advocate Harish Salve said that the company was working on a settlement with the Swiss creditor.

In the proceedings before the Supreme Court, the airline company submitted that there was one bank guarantee given to the Madras High Court Registrar as per the High Court's order. However, pursuant to the consent terms of the settlement between SpiceJet and the creditor, the said bank guarantee had to be released and returned back to the bank.

The court advised SpiceJet to approach the High Court and ask for the release of their money.

The order passed by the Supreme Court stated as follows–

"There is a settlement which has taken place on 23.05.2022 as per the consent terms. In view of it, both the parties have satisfied the settlement and want to withdraw the SLP filed by the petitioner. Accordingly, the application is allowed. Parties are directed to abide by the consent terms. It is noted that some amount was deposited in the Madras High Court in pursuance of the order of Madras High Court. Parties are at a liberty to make an application for release of the money."