'Gogoi Has Stooped So Low' : Sr Adv Rakesh Dwivedi On Ex-CJI's Comments Against Some Judges 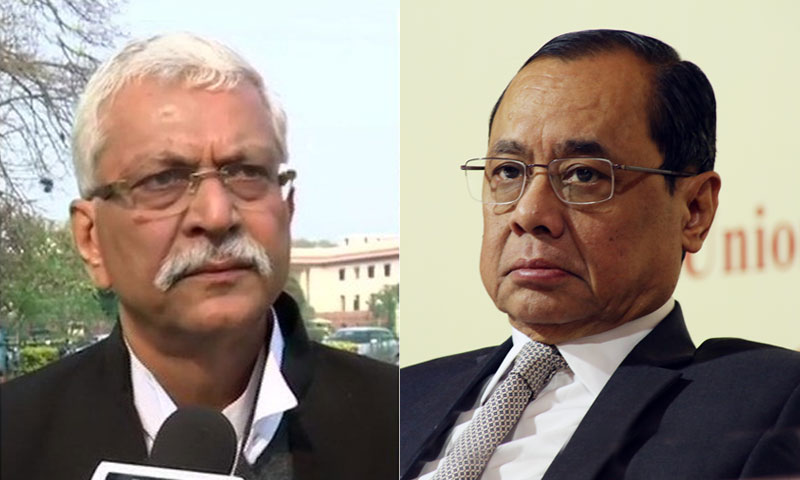 Senior Advocate Rakesh Dwivedi has issued a statement condemning the participation of Rajya Sabha Member of Parliament and Former Chief Justice of India Ranjan Gogoi in a webinar which sought to discuss the Independence of the Judiciary, expressing that his controversial nomination to Rajya Sabha has blurred the lines of separation of powers and eroded his credibility to speak on the topic....

Senior Advocate Rakesh Dwivedi has issued a statement condemning the participation of Rajya Sabha Member of Parliament and Former Chief Justice of India Ranjan Gogoi in a webinar which sought to discuss the Independence of the Judiciary, expressing that his controversial nomination to Rajya Sabha has blurred the lines of separation of powers and eroded his credibility to speak on the topic.

MP Gogoi's nomination to Rajya Sabha barely a few months after his retirement as Chief Justice of India of the Supreme Court had elicited major criticism on the aspect of separation of powers and independence of the judiciary. Therefore, his involvement in webinar meant to discuss the challenges facing independence of judiciary led to critics voicing the hypocritical nature of the same.

The statement of Senior Advocate Rakesh Dwivedi, condemning the address, reads as follows:

"Brazening is the sinister approach of Sri Ranjan Gogoi Rajya Sabha nominated MP. Be it Women employee charge, 4 judges meet against CJI Deepak Misra or the acceptance of nomination for MP he deceitfully hides his guilt without compunction; can pettily pull down honest judges like Deepak Gupta, J. The latter had no lawyer lobby nor was over activist. A fine judge with integrity. But Sri Gogoi referred to some categories asking why judges did not speak up when in office. Deepak Gupta J did the right thing not to speak when in office as that is the demand of discipline, which Gogoi conveniently forgot when he sat in the garden to speak against CJI Deepak Misra and Arun Misra J. only to do some somersault for his own defense against a female employee.

We have not forgotten how her family was tortured for raising a charge. Gogoi has stooped so low that for him the only option is to either raise a bogey of some invisible non-existent conspiracy against him or to attempt pulling down the person differing from him.

By the way, Sri Gogoi, we are still waiting for the discovery of that conspiracy you wildly flung against the poor employee who has been reinstated. Is not her reinstatement a statement that you lied to the world? He stands fully exposed. It is best that he maintains silence and enjoys the office of MP."

MP Gogoi's address during the webinar noted the criticism and conveyed that the more criticism he received, the more he was determined to speak. He began the session by commenting on the Collegium and stated that it was a method of keeping the Executive out of the decision-making process and that the Executive retained an "equal role" in the same. While the system was fine, the problem was with the fact that individuals were running the system, which could be rectified with some amount of discipline.

He also touched upon the contentious topic of sexual harassment charges against him which had entailed in him instituting an in-house procedure, with him presiding over the proceedings. The manner in which the issue had been dealt with had received a huge amount of flak and had also resulted in a protest taking place outside the compound of the Supreme Court.

During the webinar, MP Gogoi stated that numerous complaints against judges were made up and not all of them could be entertained. They were only taken up if they were serious and, in those cases, in-house procedure/inquiry was available and the same could be read online. He further elaborated reasons to not justify making the final report public as "there is good reason it may embarrass the judge". In that context, the Constitutional Scheme for protection of judges had to be strengthened.

He further attacked a certain group of individuals who have apparently held the judiciary at ransom by projecting their expectations on the judges by laying down "identification marks" for who is an "independent judge".

When asked about the aspect of post-retirement engagement of judge, MP Gogoi stated that retiring judges could be put in 3 categories: 1. Retired Activist Judges, the ones who immediately talked about freedom of speech, judicial system etc. right after retirement and not while holding office; 2. Those who engaged in professional and commercial independent work; 3. Judges who performed post-retirement engagements.

In a purported reference to the recent retirement of Justice Deepak Gupta, the MP questioned the allegiances of activist judges and the aspect of retiring judges doing commercial work getting acquainted with lawyers. Regarding post-retirement engagements, he referred to a 2016 Vidhi report that stated that out of 100 retiring judges, 70 had accepted post-retirement engagements, and he asserted that this was not an indication of independence of judiciary being compromised.

The webinar concluded with the former CJI questioning the need for disclosure of the author of a judgement, in reference to the 5-judge Bench decision which had been rendered in the Ram Janmabhoomi Case and, in deviance from established norms, did not carry the name of the judge who had authored the same.