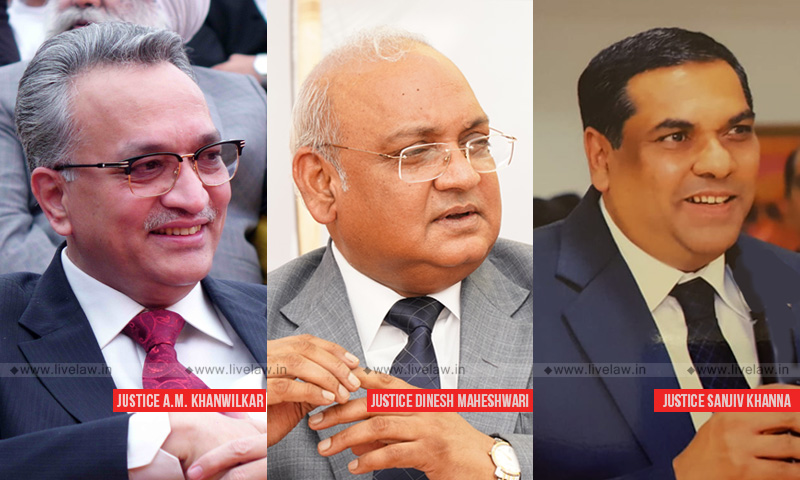 x
"The fulfilment of MCI norms and other allied conditions must be understood as an implied imperative for the consideration/continuation of Essentiality Certificate."

The Supreme Court has held that State Government has power to revoke the 'Essentiality Certificate' once granted for opening of a new medical college on the ground of 'gross deficiency'. The bench comprising of Justices AM Khanwilkar, Dinesh Maheshwari and Sanjiv Khanna observed that the fulfilment of MCI norms and other allied conditions must be understood as an implied imperative for...

The Supreme Court has held that State Government has power to revoke the 'Essentiality Certificate' once granted for opening of a new medical college on the ground of 'gross deficiency'.

The bench comprising of Justices AM Khanwilkar, Dinesh Maheshwari and Sanjiv Khanna observed that the fulfilment of MCI norms and other allied conditions must be understood as an implied imperative for the consideration/continuation of Essentiality Certificate.

It would not be in public interest nor appropriate for the State Government to remain a mute spectator and not move into action when the college miserably fails to translate the spirit behind the Essentiality Certificate within a reasonable time, the bench said.

In this case, the Madhya Pradesh Government revoked the Essentiality Certificate granted to Gyanjeet Sewa Mission Trust for establishing a medical college at Jabalpur in the State of Madhya Pradesh. This was challenged before the Madhya  Pradesh High Court which upheld the Government's order observing that it has taken into account the fraud played by the college in securing the Essentiality Certificate, the inability of the college to provide for the minimum standards of infrastructure and other facilities specified by the MCI for running of a medical college and also complete loss of substratum and larger public interest, as reasons for revocation of Essentiality Certificate.

The main contention of the college was that the State Government has no power to withdraw Essentiality Certificate on the ground of Deficient Functioning of a college. In support of this contention, the college relied on a Supreme Court judgment in Chintpurni Medical College and Hospital v State of Punjab.

Closely examining the said judgment, the three judge bench said that it agrees with the view that the act of the State in issuing Essentiality Certificate is a quasi judicial function. It added:

The court further observed that in Chintpurni Medical College (supra), it was clarified that the State Government can cancel/revoke/withdraw Essentiality Certificate in exceptional cases. It said:

"We hold that Chintpurni Medical College (supra) does not lay down in absolute terms that the State cannot revoke the Essentiality Certificate once granted for opening of a new medical college within the State."

The court then took note of the fact that no renewal permission has been granted to the college by the MCI for three successive academic sessions due to gross deficiencies.

"The State Government whilst discharging its role of parens patriae of the student community cannot remain a mute spectator and expose them to a college, which is deficient in many respects. The fact that no renewal permission has been granted by the MCI for three successive academic sessions due to gross deficiencies in the appellant­ College, is itself indicative of the state of affairs in the appellant­-College, warranting a legal inference that the substratum on the basis of which Essentiality Certificate was issued to the appellant-­College had completely disappeared."

It observed that the authority of the State to grant Essentiality Certificate is both power coupled with a duty to ensure that the substratum of the spirit behind the Certificate does not disappear or is defeated.

"The exercise of power and performance of duty with responsibility and in right earnest must co­exist. Notably, the duty under Article 47 is, in the constitutional sense, fundamental in the governance of the State. This duty does not end with mere grant of a certificate, rather, it continues upto the point when essentiality of basic medical infrastructure is properly taken care of within a reasonable time frame. Any future application for such certificate, be it by the present appellant (in terms of directions in this judgment) or by a different applicant, must be dealt with accordingly, and supervision of the State must continue to ensure that the purpose and substratum for grant of such certificate does not and has not disappeared."

The Court also observed that while dealing with the case of maintaining standards in a professional college, a strict approach must be adopted because these colleges engage in imparting training and education to prospective medical professionals and impact their academic prospects. It added:

"Thus, the future of the student community pursuing medical course in such deficient colleges would get compromised besides producing inefficient and incompetent doctors from such colleges. That would be posing a bigger risk to the society at large and defeat the sanguine hope entrenched in the Essentiality Certificate issued by the State."

The court added that merely because the applicant has made certain investments for starting the medical college, that by itself, cannot be the basis to undermine power of the State Government coupled with duty to ensure that the medical college is established in terms of the Essentiality Certificate within a reasonable time. It added:

"We are conscious of the view taken and conclusion recorded in Chintpurni Medical College (supra). Even though the fact situation in that case may appear to be similar, however, in our opinion, in a case such as the present one, where the spirit behind the Essentiality Certificate issued as back as on 27.8.2014 has remained unfulfilled by the appellant-­College for all this period (almost six years), despite repeated opportunities given by the MCI, as noticed from the summary/observation in the assessment report, it can be safely assumed that the substratum for issuing the Essentiality Certificate had completely disappeared. The State Government cannot be expected to wait indefinitely, much less beyond period of five years, thereby impacting the interests of the student community in the region and the increased doctor-patient ratio and denial of healthcare facility in the attached hospital due to gross deficiencies. Such a situation, in our view, must come within the excepted category, where the State Government ought to act upon and must take corrective measures to undo the hiatus situation and provide a window to some other institute capable of fulfilling the minimum standards/norms specified by the MCI for establishment of a new medical college in the concerned locality or within the State. Without any further ado, we are of the view that the appellant-College is a failed institute thus far and is unable to deliver the aspirations of the student community and the public at large to produce more medical personnel on year to year basis as per the spirit behind issuance of the subject Essentiality Certificate dated 27.08.2014. To this extent, we respectfully depart from the view taken in Chintpurni Medical College (supra)."