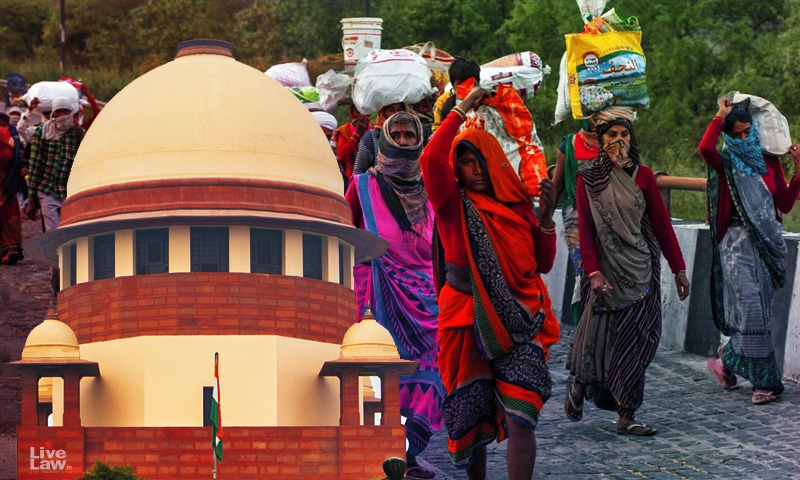 The Supreme Court on Monday directed for dry ration to be distributed to migrant workers stranded throughout the country under Atma Nirbhar Scheme or any other scheme found suitable by the States/Centre.Directions were given to the States to file Affidavits indicating the mechanism by which dry ration would be distributed to those who do not possess a ration card, and that it is for the States...

The Supreme Court on Monday directed for dry ration to be distributed to migrant workers stranded throughout the country under Atma Nirbhar Scheme or any other scheme found suitable by the States/Centre.

Directions were given to the States to file Affidavits indicating the mechanism by which dry ration would be distributed to those who do not possess a ration card, and that it is for the States to decide which scheme would be utilized for the same.

"Whether the Atma Nirbhar Bharat Scheme of the Union o fIndia, which was implemented for giving dry rations to migrant workers in May and June, 2020 is to be utilized or some other scheme has to be utilized is a matter for States to take a decision but the dry ration has to be distributed to the migrant workers throughout the country by the States", the Court ordered.

"We, thus, direct that migrant workers whereve rstranded throughout the country should be provided th edry ration under the Atma Nirbhar Scheme or any other scheme is found suitable by the States/Centre", the order said.

The Order states that it is the responsibility of the States/Union Territories to provide Community Kitchen to stranded migrant workers who have lost their employment and are in need of two meals a day.

Accordingly, directions have been given to all States/Union Territories to make community kitchens operational for migrant workers wherever they may situate in the country, and for wide publicity to be given to the schemes and community kitchens.

"Coming to the direction regarding Community Kitchen,it is the responsibility of the States/Union Territories to provide Community Kitchen to the stranded migrant workers, who have lost their employment and are in need of two meals a day, we direct all the States/UnionTerritories to make operational the community kitchen to the stranded migrant workers wherever they may situate in the country. There shall be wide publicity with respect to the various schemes including the places of community kitchens so that such needy persons may in fact take benefits", the Court said in the order.

A Bench of Justices Ashok Bhushan A and MR Shah passed the order in the suo moto case – "In Re: Problems and Miseries of Migrant Workers". The order was passed in an application filed by activists Harsh Mander, Anjali Bharadwaj and Jagdeep Chokkar, who were represented by Senior Advocate Dr Colin Gonsalves and Advocate Prashant Bhushan.

On May 13, the bench had directed the Governments of NCT of Delhi, Haryana and Uttar Pradesh to provide dry ration and community kitchens for migrants stranded in National Capital Region.

Other directions given are as follows:

The Order notes that the Court is of the view that for accessing any benefit percolating from any scheme framed by the Centre or States for the benefit of unorganized workers or migrant workers, registration of the workers is essential.

It has been recorded that while different registration processes exist under various statutory acts, no State has been able to give details pertaining to whether registration as a whole under Unorganised Workers Social Security Act, 2008, is complete.

"We are of the view that registration of unorganized workers should be completed as early as possible and there should be a Common National Database for all organized workers situated in different States in the entire country and we are of the view that process which has been initiated by Ministry of Labour and Employment for creating a National Database for Unorganised Workers should be completed with collaboration and coordination of the States, which may serve registration for extending different schemes by the States and Center".

The Court has further stated that Section 112 of the Code of Social Security, 2020 contemplates the registration of unorganized workers, gig workers and platforms. Accordingly, the Order states that instructions need to be obtained by the Solicitor-General pertaining to the steps taken regarding the same.

In wake of the above, the Court has directed that the SG may file a detailed affidavit with regard to the same within a period of two weeks.

The Court has stated that it is of the view that a suitable mechanism needs to be in existence to monitor and supervise as to whether the benefits of the welfare schemes are reaching the beneficiaries which may be from grassroot levels to higher authorities with names and places of beneficiaries so that the purpose of the schemes is achieved.

While acknowledging that a few States have made schemes for direct cash transfer to construction workers and that no such direct transfer scheme is in place for other unorganized, the Court stated that cash transfer is a matter of policy and scheme framed by each State/Union Territory and that no direction for the same can be issued by the Court unless they are covered by a scheme.

However, a direction has been given to the States/Union Territories to list in their Affidavits the details of the schemes regarding cash transfer.

The matter will now be heard on 11th June.

Case Title : In Re: Problems and Miseries of Migrant Workers, Suo Moto Writ Petition(Civil) No.06/2020