'Stoppage Of Oxygen Tankers By One State Will Have Snowballing Effect' : Delhi High Court Urges Rajasthan To Ensure Unobstructed Passage 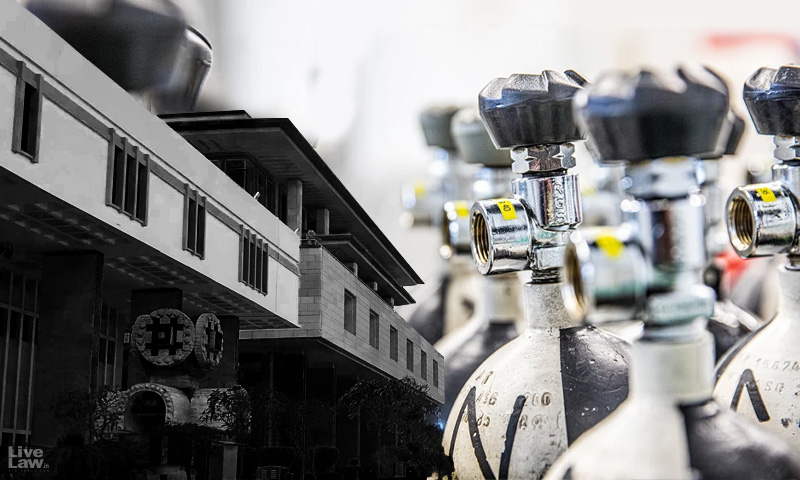 Pulling up the State of Rajasthan for detaining cryogenic tankers moved by INOX from the State, the Delhi High Court on Monday observed that any intervention in the Central Government's plan for supplying medical oxygen in the Country would "tantamount to endangering hundreds of human life, if not more."A division bench comprising of Justice Vipin Sanghi and Justice Rekha Palli also went ahead...

Pulling up the State of Rajasthan for detaining cryogenic tankers moved by INOX from the State, the Delhi High Court on Monday observed that any intervention in the Central Government's plan for supplying medical oxygen in the Country would "tantamount to endangering hundreds of human life, if not more."

A division bench comprising of Justice Vipin Sanghi and Justice Rekha Palli also went ahead to observe that it serves no purpose for anyone to cause any obstruction in the smooth flow of the much needed medical oxygen supply.

"It serves no purpose for anyone to cause any obstruction in the smooth flow of much needed Medical Oxygen. Stoppage of tankers by one State would have snow balling effect, and would eventually adversely impact the concerned State as well." The Bench observed.

The observation came on the submission made by INOX stating that their four cryogenic tankers were detained by the State of Rajasthan after they were moved from the State in order to service the transportation arrangement from the plants of Air Liquide.

When the aspect was brought into the notice of Solicitor General Tushar Mehta representing the Centre, assurance was given by him to the Bench that strict action will be taken on such incidents and that it shall be ensured that the tankers are freed so that they can proceed to their destination for the propose of filling and supplying liquid medical oxygen.

At the outset, the Court observed thus:

"We hope and expect that State of Rajasthan to honor the orders passed by the Central Government, as well as orders passed by this Court. Any intervention by anyone in the plan put in place by the Central Government for the supply of medical oxygen in the country, at this stage, would tantamount to endangering hundreds of human life, if not more."

Furthermore, noting that since the distribution plan had been worked upon by the Central Government after taking into consideration the needs of all the States and UTs, the Court observed that any concerns arising before any State should be addressed to the Virtual Central Control Room, already created by the Central Government, which consists of Nodal Officers representing the States.

During the course of hearing, Additional Solicitor General Chetan Sharma apprised the Court about the directions issued by the Central Government to all custom offices as regards to taking steps for prioritising clearance of imported equipments for setting up and operating RTPCT testing centres.

At the outset, Solicitor General submitted before the Court that the Central Government would call for a report in this regard.

In view of this, the Court directed thus:

"Let the report be called for as to how many such imports are pending, and how many are cleared, and what is the duration for which the imports are held up at the ports, and the reasons thereof. Let the said information be placed before us in a sealed cover within three days."

On Non Availability and Black Marketing of Oxygen Cylinders

Opining that the issue of non-availability and consequent black marketing of Oxygen cylinders was taking place rampantly in the national capital, the Bench directed all the refillers to provide information with regard to the supplies made by them and to be present in the hearing scheduled for Tuesday.

"We direct all the refillers to ensure that the refilled cylinders are supplied in terms of the directions of the GNCTD, and all such supplies are accounted for, failing which, we shall be compelled to take strict action against them." The Bench directed.

Furthermore, the Court had also directed the 3 major stakeholders the hospitals, Delhi government and the suppliers of oxygen, that they must get together and conduct a meeting on a priority basis at 5 PM on Monday to discuss modalities of, and issues in oxygen supply to hospitals across Delhi.

"The Chief Secretary, GNCTD is present, and is agreeable to call a meeting today itself with the suppliers – who are allocated to supply liquid Medical Oxygen to Delhi, representatives of the hospitals and nursing homes, as well as the refillers, to work out the modality and smoothen the entire process of distribution of medical Oxygen in the NCT of Delhi. The meeting shall be held today itself at 05:00 P.M. without waiting for a copy of this order. An intimation be made to all concerned, and they may be provided with the link of the video conference meeting. Whatever resolution is arrived shall be placed before this Court by tomorrow." The Court directed at the outset.