[Delhi Pollution] 'Nasty Utterances Made Against Me In Media That I Misled Court On Stubble Burning' : Solicitor General Tells Supreme Court 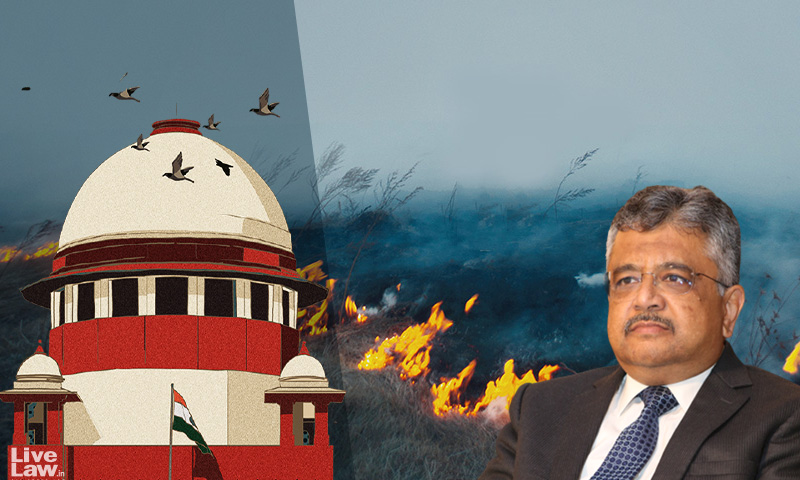 x
"It was projected as if Central Government said 4% (as contribution of stubble burning) due to elections", the SG said.

In the hearing of the case related to Delhi's worsening air pollution, the Solicitor General of India Tushar Mehta on Wednesday told the Supreme Court that his submissions made on Monday regarding the contribution to stubble burning to air pollution were misconstrued in media, and "irresponsible and nasty utterances" were made against him."I have to say something at the outset....I heard...

In the hearing of the case related to Delhi's worsening air pollution, the Solicitor General of India Tushar Mehta on Wednesday told the Supreme Court that his submissions made on Monday regarding the contribution to stubble burning to air pollution were misconstrued in media, and "irresponsible and nasty utterances" were made against him.

"I have to say something at the outset....I heard some irresponsible and nasty utterances on television media against me that I misled the Court on stubble burning", the Solicitor General submitted as soon as the bench led by the Chief Justice of India NV Ramana assembled.

Justice DY Chandrachud, a member of the bench, then said that the Court was not misled at all.

"That day, I recollect, when I pointed out the figure of 4% (as mentioned in the Centre's affidavit regarding Stubble Burning contribution), Mr.Vikas Singh pointed out that in the annexure of the affidavit the figure is 35%. We were not misled at all", Justice Chandrachud said.

"I have repeatedly told you that you get this type of criticism when you hold a public office", the Chief Justice of India told the SG.

The SG then went on the read out from the affidavit of the Union Government to clarify his position. He submitted that the overall contribution of stubble burning throughout the year might be less but its contribution increases during the October-November months.

"I have said some factors contribute throughout the year and some for limited time like stubble burning which happens in neighbouring states for 2 months..kindly see, the impact of stubble burning is not through out the year but is felt during the winter...there is also increased wind movement in the direction of NCR during these months...I have also said Post Diwali there have been increase of fire and stubble burning instances and how efforts need to be taken to reduce the stubble burning as it becomes 35 to 40 percent in 2 months..", the SG clarified.

"It was projected as if Central Government said 4% (as contribution of stubble burning) due to elections (the upcoming assembly elections in Punjab)", the Solicitor General said.

"As a law officer, I cannot go to the media and the court is the only platform I have to clarify", the SG added.

Senior Advocate Vikas Singh, appearing for the petitioner Aditya Dubey, submitted that an oral statement was made by the SG the previous day that the stubble burning contributes less than 10%.

"An oral statement was made that less than 10% was the stubble burning...", Singh submitted.

The Chief Justice of India told Singh not to "divert the issue". The CJI added "this is a matter of common sense... and these instances(stubble burning) increase in these two months".

Senior Advocate Dr Abhishek Manu Singhvi, appearing for the Delhi Government, pointed out that a study by SAFAR estimates the contribution of stubble burning as around 36% to pollution.

"...it has been stated in a central govt paper that it varies from 0 to 58 percent. Possibly Mr Mehta has taken a four or six month average", Dr Singhvi added.

"..it was said as if stubble burning is 3-4% burning it need not be addressed. We want to say it is a cause", Dr Singhvi submitted further.

The Chief Justice of India said that the Court has said that it does not want to penalize the farmers and have suggested that they should be persuaded to stop stubble burning.

"We don't want to penalize farmers. We have requested states to persuade the farmers to not burn stubble. Why are you again and again raising this?", the CJI said.

The CJI also added that debates in media was adding to the "pollution". "You want to use some issue, make us observe and then make it controversial and then only blame game will remain. Debates in TV is creating more pollution than everyone else. Everybody has their own agenda. They don't understand anything", the CJI added.

"What we're seeing is the plight of farmers.... in what circumstances he is doing this...reasons why he's unable to follow these reports... what's being done? People sitting in 5 stars in Delhi keep blaming farmers, that 4%,5% 30% is attributed to them...", Justice Surya Kant weighed in.

The hearing is underway(live-updates may be read here).

The bench comprising CJI NV Ramana, Justice DY Chandrachud and Justice Surya Kant is hearing the PIL Aditya Dubey versus Union of India and others, which seeks urgent measures to improve the air quality of the national capital.

On Monday (November 15), the Court had observed in the order that the major contributors to pollution were industrial emission, vehicular transport, power plants and construction activities, and the contribution of stubble burning was comparatively less. The Court had then directed the Centre to take emergency steps to address these issues.