'Farmer Bashing Has Become A Fashion Now; Stubble Burning Not The Only Reason For Pollution': Supreme Court Asks About Firecracker Ban, Vehicular Emissions 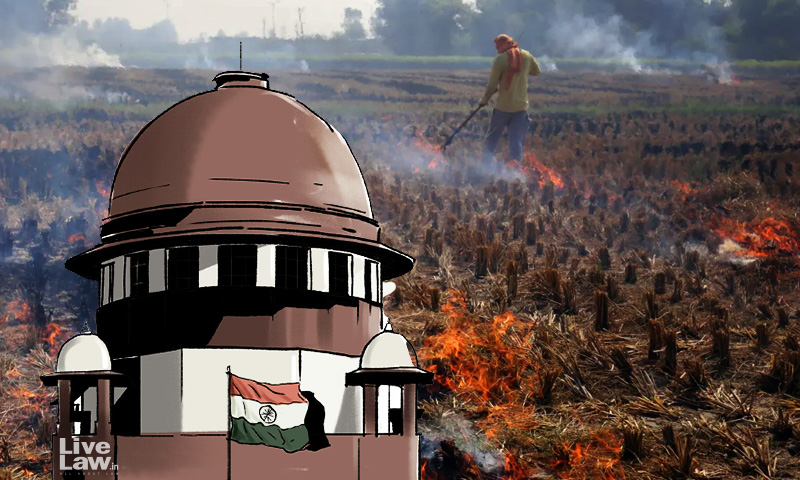 The Supreme Court on Saturday said that stubble burning by farmers cannot be blamed entirely for the Delhi's worsening air quality.A bench comprising the Chief Justice of India NV Ramana, Justice Surya Kant and Justice DY Chandrachud said that there are other contributors to pollution such as vehicular emissions, firecrackers, industrial emissions, dust etc., which need to be addressed on...

The Supreme Court on Saturday said that stubble burning by farmers cannot be blamed entirely for the Delhi's worsening air quality.

A bench comprising the Chief Justice of India NV Ramana, Justice Surya Kant and Justice DY Chandrachud said that there are other contributors to pollution such as vehicular emissions, firecrackers, industrial emissions, dust etc., which need to be addressed on an emergent basis.

At one point, the bench commented that it has become a fashion these days to "bash farmers" for Delhi's air pollution. The bench also critically commented that the Delhi Police did not done enough to enforce the firecrackers ban in Delhi during the Diwali celebrations.

When the proceedings started, the Solicitor General of India Tushar Mehta clarified that he is not taking any adversarial position neither against the petitioners nor against any state governments and everyone is "fighting the battle" in their own manner.

At first, the SG spoke about the issue relating to stubble burning.

"Over the past few days, there has been a spurt in stubble burning in Punjab, the result of which we are seeing. Punjab needs to buckle up. I am not making this adversarial", the SG said.

"You are projecting as if farmers are responsible...what about the Delhi people? What about the steps to regulate firecrackers, vehicular emissions?", the CJI asked.

The SG requested the bench to not take the view that farmers are responsible. "Your lordship knows the potential of this statement. Please don't take it that the government, whether the state or centre is putting this on farmers. There's not a remote intention of suggesting that", the SG said. The SG said that he was taking the bench through the issues one by one, and other issues will be highlighted in the sequence. The stubble burning issue contributes to nearly 30%, the SG added.

The top law officer of the Central Government then took the bench through the various measures taken by the government to dissuade farmers from stubble burning, such as subsidized supply of machines, proposal to utilize stubble in thermal power plants etc. The bench sought to know how these measures were being implemented at the ground level. The SG undertook to place on record the details and statistics by Monday, November 15.

The bench then commented that there are other causes of pollution than stubble-burning, which need to be addressed.

"You've to answer to the CJI's query, how the 80% of pollution in Delhi is due to causes apart from stubble burning...What's being done for that?", Justice Surya Kant asked.

The CJI said that he does not want to comment about the exact percentage of contribution, but there are other causes of pollution as well.

"...see some % of contribution is stubble burning, rest is pollution in Delhi, particularly crackers, industries, dust etc. Take us immediate control measures.Tell us how immediately we can reduce AQI by 200 points.If required think of 2 days lockdown or something, how will people live?", the Chief Justice of India said.

"Post pandemic schools have been opened, we are exposing little children to this at 7 in the morning ! Like Dr Gulleria said, there's pandemic there's pollution!", Justice Chandrachud added.

"First see Delhi, then we will call other states, impose some strict measures. In two three days we want to feel better", the CJI stressed.

The CJI referred to a Times of India report which spoke about increase in stubble burning.

The SG said that as per the forecast, "we have to be watchful till 18th(November)".

Senior Advocate Rahul Mehra, appearing for the Delhi Government, made a mention about the worsening Air Quality Index and said that stubble burning was probably the cause.

"The AQI was 84 on September 30 and now it has become 474...it is like smoking 20 cigarettes a day even if you are a non-smoker. While this court will look into many other factors, it probably is the stubble burning. If PUSA people can look into it..", Mehra submitted.

Then Justice Surya Kant replied, "now it has become a fashion to bash the farmers whether its Delhi government or someone else. There was a ban on firecrackers, what happened with that? What has been happening in last 7 days?What was the Delhi police doing?"

Mehra said that he takes the point of the bench and will convey it to the government.

"Stubble can be a part of the problem but not the only reason, it is nobody's case that farmers are responsible for this", the Solicitor General added.

Justice Surya Kant mentioned during one point of the hearing that he was a farmer himself, and the CJI came from a farmer's family.

"I am a farmer, The CJI is also from a farmer family, we know it", Justice Kant said while commenting about the lack of economic incentives for farmers to resort to mechanized methods instead of stubble burning.

The bench will consider the matter again on Monday, November 15, and the Centre has been asked to inform the emergency steps taken by it.