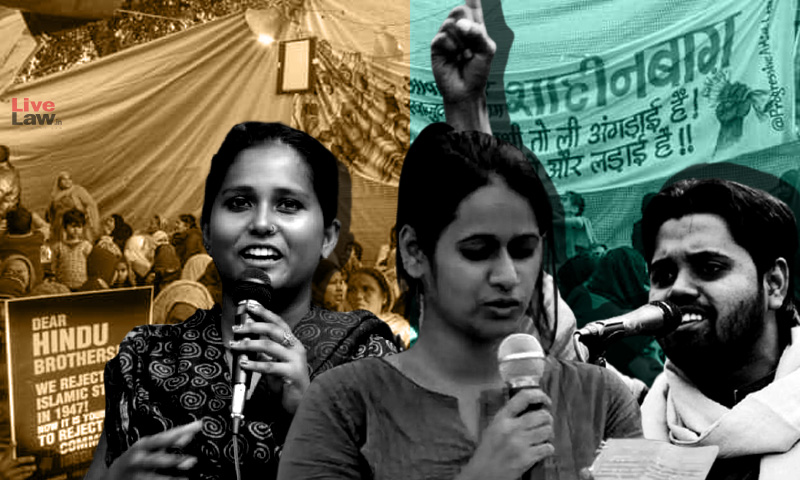 x
Devangana Kalita, Natasha Narwal and Asif Iqbal Tanha have challenged the Trial Court's action in deferring their release despite the bail granted by High Court.

Student activists Devangana Kalita, Natasha Narwal and Asif Iqbal Tanha, who were granted bail by the Delhi High Court on June 15 in the Delhi riots conspiracy case, have approached the Delhi High Court again challenging the trial court deferring their release.In the urgent applications filed before the High Court under Section 482 of the Code of Criminal Procedure, they have contended that...

In the urgent applications filed before the High Court under Section 482 of the Code of Criminal Procedure, they have contended that the Trial Court's action in deferring orders on their release despite the bail granted by the High Court was violative of their fundamental rights.

The matter is likely to be considered by a bench comprising Justices Sidharth Mridul and Justice Anup Jairam Bhambhani at 11 AM today.

They state that all the sureties were physically present in trial court despite their advance age/ professional obligations, on 15.06.2021 (from 12 pm-5.00 pm), and on16.06.2021 from 1pm to 5pm again. All sureties of the Applicant and their bonds and their FDs have been placed before the Additional Sessions Judge.

Yesterday, Additional Sessions Judge Ravinder Bedi of Karkardooma Courts had deferred the order on their release citing "heavy board" after the Delhi Police sought time for verification of the addresses of the accused and their sureties.

"..the continuing custody of the Applicant, despite the clear mandate of law, beyond 24 hours since the direction to verify sureties, is illegal, and the Applicant merits release forthwith", the plea states.

The action of the trial court is against the spirit of the High Court's bail order and violative of the fundamental right to personal liberty, the applications state.

The Delhi Police had stated that the outstation permanent addresses of student activists Natasha Narwal, Devangana Kalita and Asif Iqbal Tanha need to be verified for the purpose of their release pursuant to the Delhi High Court orders granting them bail yesterday in the Delhi Riots larger conspiracy case.

The Court had earlier sought a verification report on June 15 after the counsel for Devangana Kalita and Natasha Narwal moved the Court seeking immediate release after the High Court granted them bail.

The High Court had granted bail to Natasha Narwal, Devangana Kalita and Asif Iqbal Tanha on June 15 after observing that offences under the Unlawful Activities Prevention Act (UAPA) are not made out prima facie against them in the Delhi riots conspiracy case.