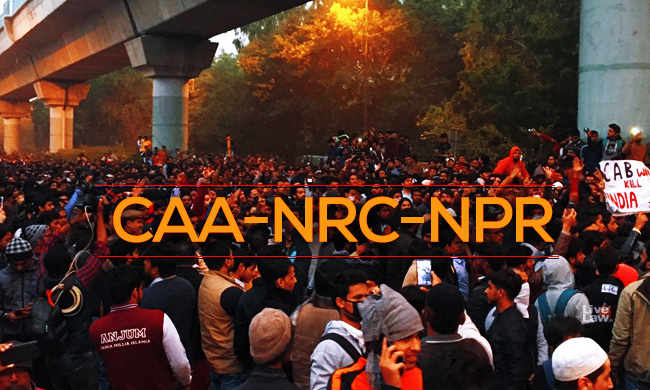 The Supreme Court today allowed a student who was rusticated from Khwaja Moinuddin Chishti Urdu, Arabi Farsi University on the reasons that he was attempting to organize protests against the Citizenship Amendment Act, 2019 to take the 6th Semester BA Hons Examination which is likely to be held in May 2022 or at a later date. Considering the peculiar facts of the case and on...

The Supreme Court today allowed a student who was rusticated from Khwaja Moinuddin Chishti Urdu, Arabi Farsi University on the reasons that he was attempting to organize protests against the Citizenship Amendment Act, 2019 to take the 6th Semester BA Hons Examination which is likely to be held in May 2022 or at a later date.

Considering the peculiar facts of the case and on account of CoVID, the bench of Justices SK Kaul and MM Sundresh while allowing Ahamad Raza Khan ("petitioner") to take the exam, also observed that shortage of attendance would not come in his way.

Appearing for Khan, Senior Advocate Huzefa Ahmadi drew Court's attention to the affidavit submitted by the University which stated that Khan had submitted profound apologies addressed to the Vice-Chancellor of the University on September 21, 2021, pursuant to which as per the Vice Chancellor's orders a Committee was constituted to consider the student's request to appear in the 6th-semester examination in view of the apologies and also the Top Court's order dated September 6, 2021.

Senior Counsel also referred to the Committee's unanimous resolution as per which the Committee had decided to allow Khan to appear in the exam and grant him exemption of attendance (as Khan met the attendance requirements till 5th semester and was rusticated before the commencement of 6th Semester ) subject to orders by the Top Court.

"Ahmad Raza Khan meets the attendance requirement till 5th Semester. He was suspended/ rusticated before the commencement of 6th semester which commenced on 7th January 2020 and therefore he does not have attendance for 6th Semester examinations.

Ahmad Raza Khan's regret letter and apology letter may be accepted and he can be given a chance to complete his course by allowing him to write the examination in light of the observation of the Hon'ble Supreme Court for the sixth semester of his course i.e BA (Hons) in History likely to be held in May 2022 or at a later date subject to the permission to appear in the examination and exemption of attendance given by the Supreme Court," the affidavit had stated with regards to Committee's unanimous resolution.

Appreciating the stand taken by the University and based on the apology tendered to the relevant committee and the suggestions as approved by the Vice-Chancellor the bench agreed to allow Khan to take the exam.

"We appreciate the stand taken by the Respondent University & based on the apology tendered to the relevant committee & the suggestion as approved by VC, the petitioner has been given a chance to complete the course by allowing him to write the exam which is likely to be held in May 2022 or at a later date subject to the orders given by this court. The aforesaid solves the problem of the petitioner," the bench further noted in its order.

The bench in the present matter was hearing a special leave petition assailing the Allahabad High Court's order affirming University's decision. The student had prayed for a stay of the rustication/expulsion orders dated February 28, 2020, and March 3, 2021, allowing the petitioner to attend classes and appear in the exams had also been prayed for.

Taking into consideration that the question in the present case pertained to permitting the petitioner to take the third-year examination without again permitting him to start his student life once again in the University, the division bench of Justices SK Kaul and MM Sundresh had issued notice on September 6, 2021. The bench had also said that it could have taken a more compassionate view of the student's earlier conduct but his earlier conduct made the situation very difficult for him.

Details Of The Special Leave Petition

Filed through Advocate on Record Talha Abdul Rahman and by Advocate Harsh V Kediya, the SLP stated that no show-cause notice or charge-sheet was ever provided to the Petitioner, and the only charge against him was attempting to organize the protest.

It was argued that the order of rustication had been passed without giving the BA student a proper opportunity of hearing and that even the Chancellor had violated the principle of orality by not personally hearing the student.

It was also averred that the High Court ought to have considered the grievance of the petitioner on merits, rather than summarily upholding the rustication order.

On February 1, 2020, the Petitioner was summoned by the Proctor to appear before a 7-Member Committee to answer the charge in relation to his attempt to organize CAA protests. and no other charges, the plea states.

The Petitioner appeared before the 7 Member Committee on February 10 and gave a handwritten explanation stating that while he intended to organize a peaceful protest as per the right granted by the Constitution, the same was not even organized as there was violence in other parts of the country. According to the petition, it was for the first time before the Committee on that day, that the Petitioner was orally asked to explain other allegations in respect to certain past conduct which were not mentioned in the summons dated February 1.

Clearly, the past of the Petitioner had been resurrected unlawfully with a predetermined mind to sustain the rustication order passed by the higher authority to which all the Committee Members were subordinate, it was averred.

"University has rusticated the Petitioner merely for attempting to exercise his Constitutional right to hold peaceful protests and right to freedom of speech and expression. Protests were called off by him and were not organized and still, University's Chancellor passed an order dated March 3, 2021, confirming his rustication. The punishment imposed upon the Petitioner for the exercise of his Constitutional rights is unconscionable as well disproportionate," the plea had stated.

The petitioner in the SLP had also submitted that the High Court did not appreciate that the petitioner had been expelled for the reason of his Facebook posts against CAA/NRC and his attempt to organize protests which were his constitutional rights.

Arguing that the High Court assumed that there were 7 charges communicated to the petitioner, which is contrary to the record, the SLP states the only charge against him was attempting to organize the protest.

Contending that the university's power of suspension or rustication is uncontrolled and was thus being exercised in a whimsical manner, the BA student in his plea had submitted that,