'We Have Found Students Go To Ukraine As Medical Course Fee Is Less' : Supreme Court Reduces Cost Imposed On Father 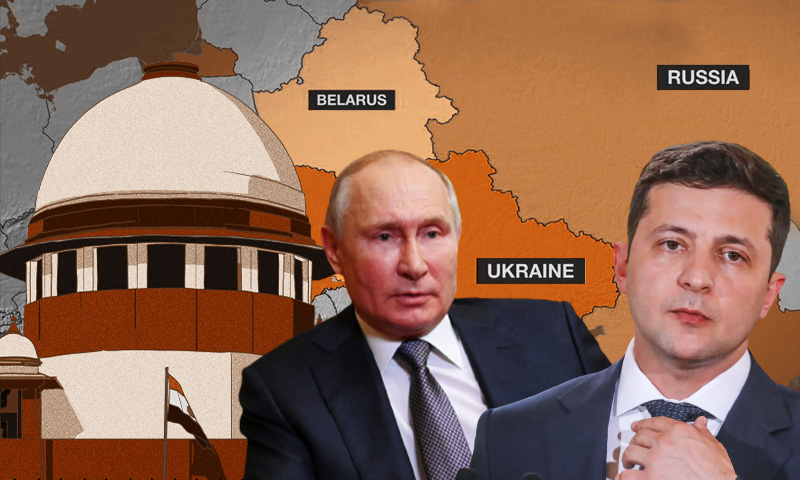 Taking a sympathetic view of the Indian students who go to Ukraine for medical admission due to lesser fees when compared to Indian private colleges, the Supreme Court on Thursday reduced the cost imposed on the father of a student admitted in a medical course in an Ukrainian University for furnishing false information to the concerned authorities for the purpose of issuance of...

Taking a sympathetic view of the Indian students who go to Ukraine for medical admission due to lesser fees when compared to Indian private colleges, the Supreme Court on Thursday reduced the cost imposed on the father of a student admitted in a medical course in an Ukrainian University for furnishing false information to the concerned authorities for the purpose of issuance of eligibility certificate.

Saying that the ongoing Russia-Ukraine conflict revealed the plight of the Indian students, the Court reduced the cost from Rupees 10 lakhs to Rupees 2 lakhs.

A Bench comprising Justices L. Nageswara Rao and B.R. Gavai recalled its order dated 08.02.2022 imposing a cost of Rs. 10 lakhs to be deposited with the Manipur Legal Services Authority within a period of 8 weeks for making the false declaration, wherein it has noted -

"The practice adopted by the respondent in getting his son admitted in the medical course in a foreign University without an eligibility certificate is deprecated. Further, furnishing false information to the authorities for the purpose of issuance of eligibility certificate is an attempt to hoodwink the authorities. In view of the admission of the respondent's son being contrary to the regulations and in view of the false information given by the respondent in the application filed for eligibility certificate, in the normal course, we would have set aside the judgment of the High Court and allowed the appeal filed by the National Medical Commission. However, in the peculiar facts and circumstances of this case, taking into account the future of the respondent's son who has completed his medical course in June 2020 and that he was not responsible for whatever was done by the respondent, we are not inclined to interfere with the order passed by the High Court."

Apart from cost the Apex Court had directed the student to perform charitable service by working with the government for a period of two years after his successful completion of FMG screening Test.

On Thursday, the Bench noted that the ongoing Russia-Ukraine conflict has revealed that a large number of students go to Ukraine because the fees for medical colleges there are considerably lower than that in India. In view of the same, Justice Rao informed Advocate, Mr. Gaurav Sharma, appearing on behalf of the National Medical Commission ("NMC"), that the Bench had decided to reduce the cost to Rs. 2 lakhs.

"See, Mr. Shamra, the ongoing war has been revealing to us. We have found that there are about 20,000 students undergoing medical education in Ukraine. We have found all these students are going there for the fees being less. So, we want to alter this 10 lakh cost. We realise the parents, they are working somewhere. This appears to be excessive. We will reduce the cost to 2 lakhs."

Accordingly, it recorded in the order -

"While disposing of the appeal filed by the NMC, a cost of Rs. 10 lakh was imposed on Respondent No. 1 for filing a false declaration for the application filed for issuance of eligibility certificate. After deliberation, we are of the opinion that the amount that was directed to be paid as cost had to be reduced from Rs. 10 lakh to Rs. 2 lakhs. We order accordingly."

The student passed his Higher Secondary examination in 2014 and thereafter had applied for a UG medical course in Ukraine. On 24.09.2019 after getting admission and joining the course, he filed an application for issuance of eligibility certificate. It was stated in the certificate that he was "17 years, 3 months and 30 days" as on 31.12.2014, whereas the application form filed for issuance of eligibility certificate reflects his date of birth to be 01.11.1998.

On 11.10.2019, he was issued with a show cause notice by the NMC to explain as to why his application should not be rejected on the ground that he had pursued admission to the MBBS course before he attained the age of 17, in derogation of the extant policy (Clause 4(1) of Graduate Medical Education Regulations, 1997). An explanation was provided, but no order was passed by NMC issuing the eligibility certificate. In the light of the same, the father of the student filed a writ petition before the High Court seeking directions to the NMC to issue the eligibility certificate. The High Court directed NMC to dispose of the respondent-father's representation within a period of one month from date of receipt of order.

On 30.01.2020, the NMC rejected respondent's representation as the student had not attained the age of 17 years at the time of admission in 2014. Aggrieved, the respondent filed a writ petition challenging the rejection and beseeching the Court to direct the NMC to issue an eligibility certificate. The High Court permitted the petition on the ground that the son would face hardship if the eligibility certificate is not issued now.