[Students vs UGC] UGC Cannot Compel That Exams Be Held; Can Only Lay Down Standards: Datar For Maharashtra In SC 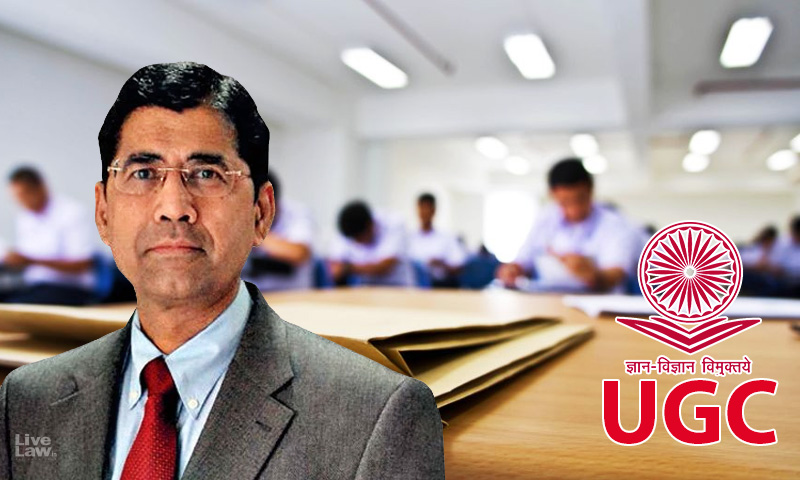 The University Grants Commission can only lay down guidelines and standards for examinations, and cannot compel that exams should be held by a particular date, submitted Arvind Datar, Senior Advocate, on behalf of the State of Maharastra before the Supreme Court on Tuesday.He submitted that the source of the power of the UGC Act is traced to Entry 66 of List 1 of the Constitution which deals...

The University Grants Commission can only lay down guidelines and standards for examinations, and cannot compel that exams should be held by a particular date, submitted Arvind Datar, Senior Advocate, on behalf of the State of Maharastra before the Supreme Court on Tuesday.

He submitted that the source of the power of the UGC Act is traced to Entry 66 of List 1 of the Constitution which deals with "coordination and determination of standards" for higher education.

In this regard, Datar referred to the Constitution Bench decision of SC in Modern Dental College case to state that "coordination and determination of standards" will not include right to conduct examinations.

In response to this, Justice M R Shah, a puisne judge of the bench, observed that it was the Universities which was conducting the exams and not the UGC.

"UGC is not conducting the exams here. That is up to the Universities. You can't say that UGC says conduct exams".

Referring to the arguments based on the welfare of students, Justice Ashok Bhushan, the presiding judge of the bench, observed that the students cannot decide their welfare.

"Only the authorities can decide what is in their welfare. Students are not competent enough to decide", Justice Bhushan remarked.

Justice R Subhash Reddy raised the query, "Won't not conducting the exams lead to dilution of the standards only ?".

Responding to this query of Justice Reddy, Datar pointed out that the Indian Institutes of Technology have conferred degrees without conducting final exams.

"If a central institute of international repute can do this, why can't we(State of Maharashtra)?", he asked (The State of Maharashtra has passed a resolution based on the decision of the State Disaster Management Authority to cancel the final semester exams and directed the Universities to confer degrees based on alternate evaluation methods).

Not holding exams not fatal; will not dilute standards Datar

The senior counsel then elaborated on how not conducting the exams is not something fatal and will not dilute the standards.

He pointed out that as of March 2020, 5 semesters(for 3 year programmes) had already been completed and the internal assessment for the sixth semester was also over. Referring to Clause 6 read with Clause 8 of the 2003 UGC Guidelines, he submitted that a student is continuously evaluated from day one.

As per the CGPA system, if there are 42 courses, the student has already completed 36. As of March, his CGPA will be the average of first five semesters.

At this juncture, the Solicitor General sought to counter by saying that the semester system is not applicable throughout the country.

However, Datar reiterated that they do, and that the UGC Regulations apply across the country.

Datar: I want to make one point clear. These Regulations apply across India.

Datar also clarified "I'm not saying that a 2nd year student should be passed. I'm saying that this is a student who has almost finished the course". He also pointed out that job interviews take place in the last semester where the students has completed about 87% of the course.

Datar submitted that the direction issued by the UGC to hold final year exams by September 30 was "outside its mandate" and "ultra vires the UGC Act".

The uniform direction to hold exams without advertence to local situations is arbitrary and violative of Article 14.

"How can you say that Kerala, Maharashtra, Odisha must hold it by Sept 30 ? It is completely violative of Art. 14", he said.

In this connection, he pointed out to the April 29 guidelines issued by the UGC which left it to the State's to take a call on final exams depending on the local situations. This was changed in July 6 with the latest guidelines, although the COVID-19 cases had crossed lakhs in the country by then.

"When there were few cases and they couldn't hold the exams, how can they say that we must hold the exams by Sept 30 when the cases are in lakhs ?!", he asked.

He further said that many educational institutions have been turned into quarantine centres and they cannot be opened until August 31 as per the MHA guidelines.

The next point raised by him was about the lack of access for all students to online exams.

"When it comes to accessibility and online exams, how will students without access be able to give the exams ? What about students with disabilities?", he submitted.

Coming back to the earlier stand of UGC guidelines, Datar said that the recommendations of the expert committee dated April 30 stated that if the severity of the situation does not abate, the students could be evaluated on internal marks.

"If the same UGC says back then that chart your own course, how can they force us now?", he asked.

He highlighted that the recent Committee report (which mandates compulsory conduction of exams) does not mention who has been consulted.

Further, referring to Section 12 of the UGC Act, he submitted that UGC has to consult "universities and other bodies" before taking a decision and cannot act unilaterally.

The UGC  direction to hold final exams by September 30 was taken without consulting anyone in Maharashtra and without finding out the situation in the State.

On this note, he concluded the submissions.

The hearing is progressing in the top court.

Update at 14.10 hours : The SC has concluded the hearing and has reserved judgment.