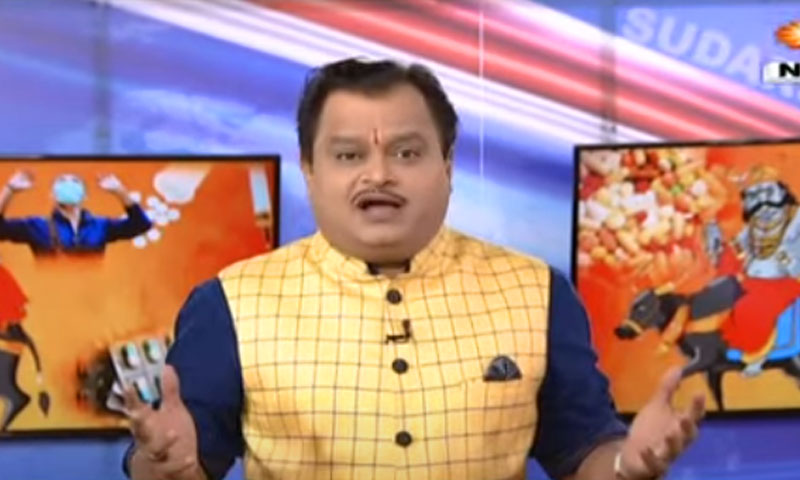 Sudarshan News TV has filed an additional affidavit in Supreme Court, in the ongoing case regarding the restraining of a programme series "Bindas Bol" with the tag line "UPSC Jihad", allegedly touted as an expose of infiltration of the Muslims in Civil Services.Filed on behalf of Advocate Vishnu Shankar Jain, the affidavit undersigned by the Editor-In-Chief of Sudarshan TV, Suresh...

Sudarshan News TV has filed an additional affidavit in Supreme Court, in the ongoing case regarding the restraining of a programme series "Bindas Bol" with the tag line "UPSC Jihad", allegedly touted as an expose of infiltration of the Muslims in Civil Services.

Filed on behalf of Advocate Vishnu Shankar Jain, the affidavit undersigned by the Editor-In-Chief of Sudarshan TV, Suresh Chavhanke states that he will abide and comply by the programming code and directions of the Ministry of Information and Broadcasting strictly

Chavhanke states that in light of the facts stipulated, the stay granted by the top court on the telecast of the remaining episodes of Bindas Bol be vacated.

Apropos this, it is averred that he was "shocked and pain" when NDTV had broadcasted a programme anchored by Barkha Dutt in September 17, 2008 titled "Hindu Terror: Myth or Fact?", whereby, a "Hindu Saint was shown with 'Tilak' and 'Chillam' and also a 'Trishul' (one of most scared symbols for Hindus and associated with most revered deity of the Hindus, 'Lord Shiva')"

The affidavit further states that NDTV has also broadcast another programme on August 26, 2010, again anchored by Barka Dutt titled "Is Saffron Terror Real?". "In the said programme a Hindu cultural gathering was shown in Saffron colour clothes," Chavhanke states.

"That in light of what has been submitted in my previous affidavit dated 16.09.2020 and hereinabove, this Hon'ble Court may be pleased to vacate the injunction on the telecast of the remaining episodes of the programme series," says Chavhanke.

The Editor-in-Chief had submitted an affidavit earlier, asserting that he has no ill-will against any community or individual and that there was no there is no statement or message in the four episodes broadcast that members of a particular community should not join UPSC .

Defending his stance, Chavhanke had stated that the words "UPSC Jihad" were used because it had come to its knowledge through various sources, that Zakat Foundation has received funds from various terror-linked organisations.

The channel said that it had sent an invitation to Mr. Syed Zafar Mahmood, the founder of Zakat Foundation of India (ZFI), to participate in the debate on the show and that a response was received on his behalf that he will participate in the show. A channel crew was sent to the office of ZFI and the residence of Mr. Syed Zafar Mahmood to get their responses but the police did not allow the crew to stand near the residence of Mr. Mahmood, said the channel.

On September 17, Sudarshan News TV had also filed an application in the Supreme Court seeking live telecast of the hearing in the case against its controversial show "Bindas Bol", on which a telecast ban has been imposed by the top court on the prima facie finding that the show vilified Muslims.

In the afternoon hearing of September 18 of case, the Bench headed by Justice DY Chandrachud and comprising of Justices Indu Malhotra and KM Joseph remarked that the show has been presented in an 'inciteful manner'.

Senior Advocate Shyam Divan also assured the Court that they will file a clear affidavit on stereotypes which have a tendency to be perceived as hate speech among the viewers.

The case is expected to be taken up for further hearing tomorrow.