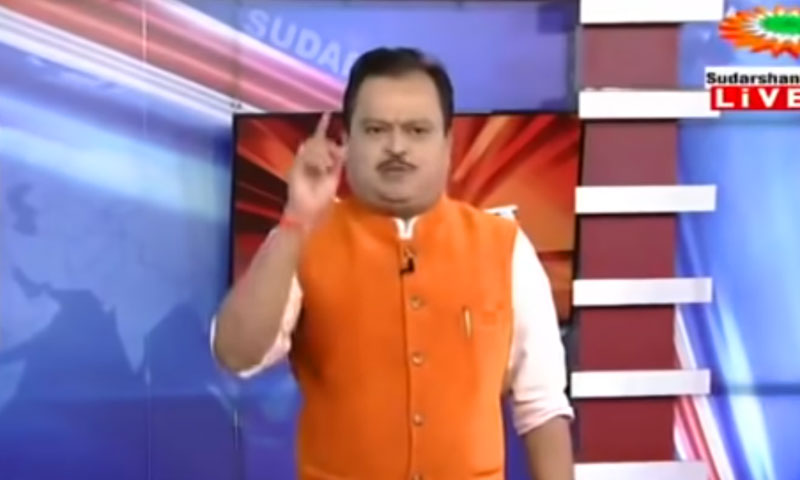 In the ongoing case against Sudarshan TV for telecasting a show, about the alleged Muslim infiltration in the Civil Services, Zakat Foundation has filed an intervention application in Supreme Court.Zakat Foundation is at the centre of the controversy and has been accused of deriving foreign funds from terror-linked organisations by Sudarshan TV in its show bindas bol with the tagline...

In the ongoing case against Sudarshan TV for telecasting a show, about the alleged Muslim infiltration in the Civil Services, Zakat Foundation has filed an intervention application in Supreme Court.

Zakat Foundation is at the centre of the controversy and has been accused of deriving foreign funds from terror-linked organisations by Sudarshan TV in its show bindas bol with the tagline "UPSC Jihad".

Senior Advocate Sanjay Hegde will argue for Zakat Foundation in the matter.

In the first instance, the foundation has stated that the news channel has indulged in "cherry-picking facts from publicly accessible documents on the internet" and in "drawing unsustainable inferences therefrom".

Filed on behalf of Mrigank Prabhakar, the foundation has averred that the news channel has had hateful antecedents. Highlighting the "unfounded allegations" put forth by Sudarshan News, Zakat foundation states that the when the first promo of the show aired on August 28, Zakat was not even mentioned by the anchor.

"The promo, rather, provoked the people by saying 'just think if the Jihadis of Jamia become the Collector of your district or Secretary in ministries then what will happen". It is pertinent to state that the VC of Jamia Milia Islamia has stated that out of 30 students of Jamia selected by UPSC this year, there are 14 Hindus and 16 Muslims....The news channel has been acting against a particular community. A job advertisement was aired by the channel but with a condition that Muslims cannot apply there. Such actions clearly reflect the amount of hatred which the channel holds and the radical thinking which is a threat for the social wellbeing of the Country" - Excerpt of IA.

Be it as it may, the foundation claims that the show "reflects the antagonistic mind set against a particular community and is nothing but a prime example of virulent Islamophobia."

The IA also mentions that Sudarshan TV channel editor Suresh Chavhanke, was arrested in 2017, in the month of April at Lucknow airport for hurting religious sentiments and promoting enmity between religious groups and has been known for using "highly provocative and militaristic rhetoric to describe muslims"

"It is respectfully submitted that the above comments made on the Show clearly demonstrate that Suresh Chavhanke was not initiating a 'discussion' or 'debate' on a public affairs issue, but was openly engaging in hate speech and a misinformation campaign to vilify Muslims as a community by seeking to fear-monger that Muslims are increasing in number and are out to exclusively corner the benefits of reservation for themselves"

The foundation further states that the channel has made libellous and scandalous allegations against the foundation, where in fact, it is a charitable organisation.

"Zakat Foundation is a charitable organization, coming under the FCRA and it has been labeled as an organization receiving terror funds. Respondent No. 5 is making liibelous and scandalous allegation without a modicum of with absolute impunity under the garb of press freedom. Further, it is shown as if all Muslims candidates are receiving funds from the Zakat foundation," the application reads.

Further to this, Zakat Foundation has stated it had received ₹ 29,95,02,038, (twenty-nine crores, ninety-five acs, two thousand thirty-eight) till date as donations, out of which ₹ 1,47,76,279/- (One crore Forty-seven lacs Seventy-six thousand two hundred seventy nine only) has been received from the four sources located abroad which have been referred to by the channel.

"Total sum of the donations ever received by ZFI from the four sources which are alleged by Sudarshan News as of doubtful integrity constitutes 4.93 percent of the total charity amount ever received by the Applicant Organization from all sources"

The Intervenor also states that Madina Trust is a minuscule donor charity registered in Britain.

"Its chair is 88-year-old retired gentleman Sri Zia ul Hasan who belongs to Ambala and had shifted to where he worked as Accountant. His wife belongs to Saharanpur. They keep helping the poor and needy in India and have said that his charity never participated in any political activity nor has intention ever to do so," says ZFI

The foundation further contends that "Alt News", a news website which is known for 'fact check' has compiled a list of incidents when Sudarshan news "has blatantly attempted to create communal divide within the country. The link can be accessed at - Sudarshan News and its history of dangerous, communally-divisive misinformation, October 2019," says the intervenor.