Plea In SC Seeks Authorisation For Use Of Remdesivir, Favipiravir and Tocilizumab For Govt. Purposes And/Or Grant Compulsory Licenses For Their Patents 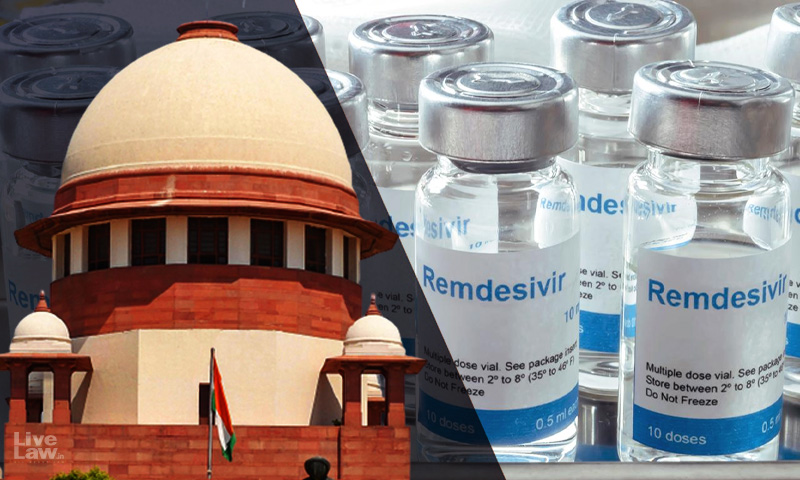 An Application has been filed in the suo moto matter before the Supreme Court pertaining to the COVID-19 crisis in the country seeking directions to issue authorization for using the patents for government purpose and/or notifying grant of Compulsory Licenses under Patents Act for patent covering drugs Remdesivir, Favipiravir and Tocilizumab.Filed by Jan Swasthya Abhiyan (Mumbai, which is...

An Application has been filed in the suo moto matter before the Supreme Court pertaining to the COVID-19 crisis in the country seeking directions to issue authorization for using the patents for government purpose and/or notifying grant of Compulsory Licenses under Patents Act for patent covering drugs Remdesivir, Favipiravir and Tocilizumab.

Filed by Jan Swasthya Abhiyan (Mumbai, which is a network of organisations and individuals, "including feminist organisations, academics, activists, service delivery networks, trade unions, whose members are citizens of India, collectively working towards health issues", it is submitted that the Applicant has been closely monitoring and working with government health officials, NGOs to help ordinary citizens and families gain access to healthcare.

It submits that, from March 2021 onwards, India has been witnessing a second wave of the Coronavirus.

Stating that the second wave is more virulent and infectious than the first wave, the Application underlines that a rapid response is needed with the Centre permitting the repurposing of known drugs and issuing guidelines for treatment of COVID-19.

Repurposing of old drugs is a strategy wherein known compounds with known biochemical and physiological effects are used to treat a new disease – which in this case is COVID-19. This is known as repurposing of drugs".

The Applications sets out three drugs enlisted for the treatment: Remdesivir, a drug developed in 2009 to treat Hepatitis C, which is a patented drug in India and whose patent is held by Gilead Sciences, Inc. It is submitted that ordinarily, one chemical compound should have only one patent, but in the case of this drug, three patents have been granted, thereby resulting in market monopoly for Gilead till 2035.

It is then submitted that while Remdesivir is provided by the licensees between a price range of INR 899 to 3490, the same is being sold in the black market at a price as high as INR 30,000 per vial due to limited stocks and shortages, which has been recognized by the CDSCO which has attempted to put into place a monitoring mechanism to ensure availability of this drug.

The second drug is Tocilizumab, which is an immunosuppressive drug which is a known treatment for rheumatoid arthritis. While Remdesivir is given to patients with moderate symptoms, Tocilizumab is essential for persons who are critical and need intensive care. With respect to his drug, patent has been granted to Chugai Seiyaku Kabushiki Kaisha and F. Hoffman La Roche AG in India.

It has been contended that the drug is not being manufactured in India and is being imported and marketed by Cipla, the licensee for Roche in India.

"Also pegged as a rich man's drug, the drug costs between Rs. 40,000 and 50,000 per dose in India. Reportedly, the supply for the drug with Cipla has also run out and they are unable to indicate a date when the next stock of the drug would arrive".

Favipiravir, the third drug, is an anti-influenza agent developed in Japan and is covered by multiple patents. There are reports of shortage of this drug in the market as well.

The Application then goes on to submit that given the emergency situation in the country, a proposal was made by the Centre at the international level before the TRIPS Council at the World Trade Organisation for temporary suspension of intellectual property rights on all COVID-19 related technologies.

"That is, the Respondent No. 1 has not only acknowledged the need to suspend intellectual property rights to support local manufacturing and respond to demand for diagnostics, therapeutics, vaccines and treatment, but is actively promoting it".

The Application contends that the three aforementioned drugs are protected by patents which are valid till at least 2030, and the limited number of manufacturers is a recipe to exacerbate the current national health emergency. Further, several companies are unable to manufacture the drugs, despite having the capacity to do so, in fear of legal action against them by the patentee.

However, in order to respond to the demand of the drugs, there exists a need to rapidly upscale production, and the same, as per the Application, is possible only by issuing authorization for Government use or orders for compulsory license for public non-commercial use in respect of the patents covering the drugs.

"The Central Government is empowered under Section 100 of the Patents Act to authorize any person to use a patented invention for the purposes of the government. In the case of Remdesivir, Favirpiravir and Tocilizumab, this power may also be exercised to authorize entities to produce these patented drugs. Additionally, Section 92 explicitly empowers the Central Government to notify that compulsory licenses for a patent in circumstances of national emergency, extreme urgency or public non-commercial use".

Submitting that providing access to essential life-saving medicines in a public health crisis of COVID-19 is an obligation of the State and that lack of or limited availability and accessibility of the medicines violates the Constitutional right to Health and Life under Article 21, the Application prays for authorization by the government of any person under Section 100 to use the patents.

Further, the Application prays for compulsory licenses under Section 92 to be issued and for directions to the Centre to undertake forecasting of the courses required to treat the virus which has affected people across the country.