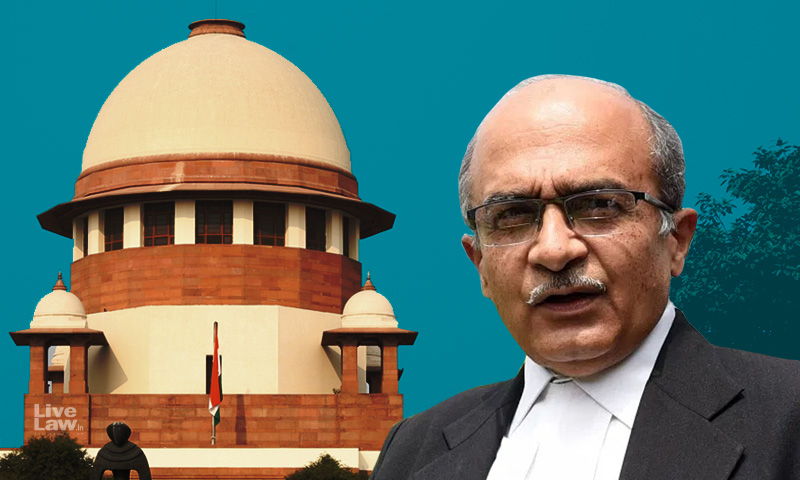 An application has been filed by Advocate Prashant Bhushan in the suo moto contempt proceedings pending against him before the Supreme Court, seeking permission to lead further evidence in the matter. The application has been filed under section 17(5) of the Contempt of Courts Act, requesting the Top Court that in case it was not satisfied by his preliminary reply and wishes to...

An application has been filed by Advocate Prashant Bhushan in the suo moto contempt proceedings pending against him before the Supreme Court, seeking permission to lead further evidence in the matter.

The application has been filed under section 17(5) of the Contempt of Courts Act, requesting the Top Court that in case it was not satisfied by his preliminary reply and wishes to proceed further in the matter, he be allowed to lead further evidence, after being provided with a copy of the complaint.

On Wednesday, the Supreme Court reserved orders on the contempt case, after hearing both the parties. During the hearing, Bhushan defended his impugned tweets by saying that they amounted to "fair criticism" of the Court, and did not scandalize the institution. He had filed a detailed reply affidavit to the contempt notice, stating that expression of bona fide opinion about the Court cannot amount to contempt.

Bhushan has now moved an application through Advocate Kamini Jaiswal, stating that if the Court decides to continue the proceedings against him, he should be given an opportunity to provide 'further evidence' in terms of Section 17(5) of the Contempt of Courts Act.

"If my preliminary reply where I explained my tweets and laid down the law of the land as to why the notice was not sustainable as against me is not acceptable to the Court then I invoke my right to lead evidence under Section 17(5) of the Contempt of Courts Act, 1971," the application states.

Reliance has been placed on the Supreme Court's judgment in Vijay Kurle, In re, where the alleged contemnor was permitted to file a fresh affidavit.

Bhushan has further pointed out that he was served a contempt notice which did not include a copy of the contempt petition on the basis of which the notice was issued to him.

"This was in violation of Rule 6(2) of Rules to Regulate Proceedings for Contempt of the Supreme Court, 1975, framed under Article 145 of the Constitution," he has contended.

Rule 6(2) provides that when action is instituted on the petition, a copy of the petition along with the annexure and affidavits shall be served upon the person charged.

Reliance is also placed on Vijay Kurle (supra) where the Court directed that the complaint be supplied to the alleged contemnor after he complained that he was not supplied with the copies of the complaint on the basis of which suo moto action was initiated against him.

The complaint was with respect to his tweet dated June 29 commenting on CJI seated on a Harley Davidson bike.

Lastly, Bhushan has pleaded that the contempt proceedings vis-à-vis his tweet dated 27.06.2020 constitutes a "separate cause of action".

"The court having taken cognizance of the second tweet is required to initiate it as a separate proceeding," it is submitted.

This tweet pertains to his remarks over "destruction of democracy" and the Supreme Courts role thereon.

Proceedings as regards the second tweet are required to be placed before the CJI who is the master of the roster for allocation of bench, Bhushan said.

He has again relied on the case of Vijay Kurle (supra), where after taking cognizance and issuing notice to Kurle and others in a pending contempt matter against one advocate Nedumpura, Justice Nariman's bench placed the matter before the Chief Justice for allocation of bench.

The application refers to the following observations from Vijay Kurle in that regard :

"...the Bench in deference to the principle of master of the roster, after taking cognizance of the scandalous allegations made in the complaints of the alleged contemnors and issuing notice to them directed that the matter be placed before Hon'ble the Chief Justice for listing before an appropriate Bench. This, in our view, is the proper procedure. If an article, letter or any writing or even something visual circulating in electronic, print or social media or in any other forum is brought to the notice of any Judge of this Court which prima facie shows that the allegation is contemptuous or scandalises the court then that Judge can definitely issue notice and thereafter place it before Hon'ble the Chief Justice for listing it before an appropriate Bench"