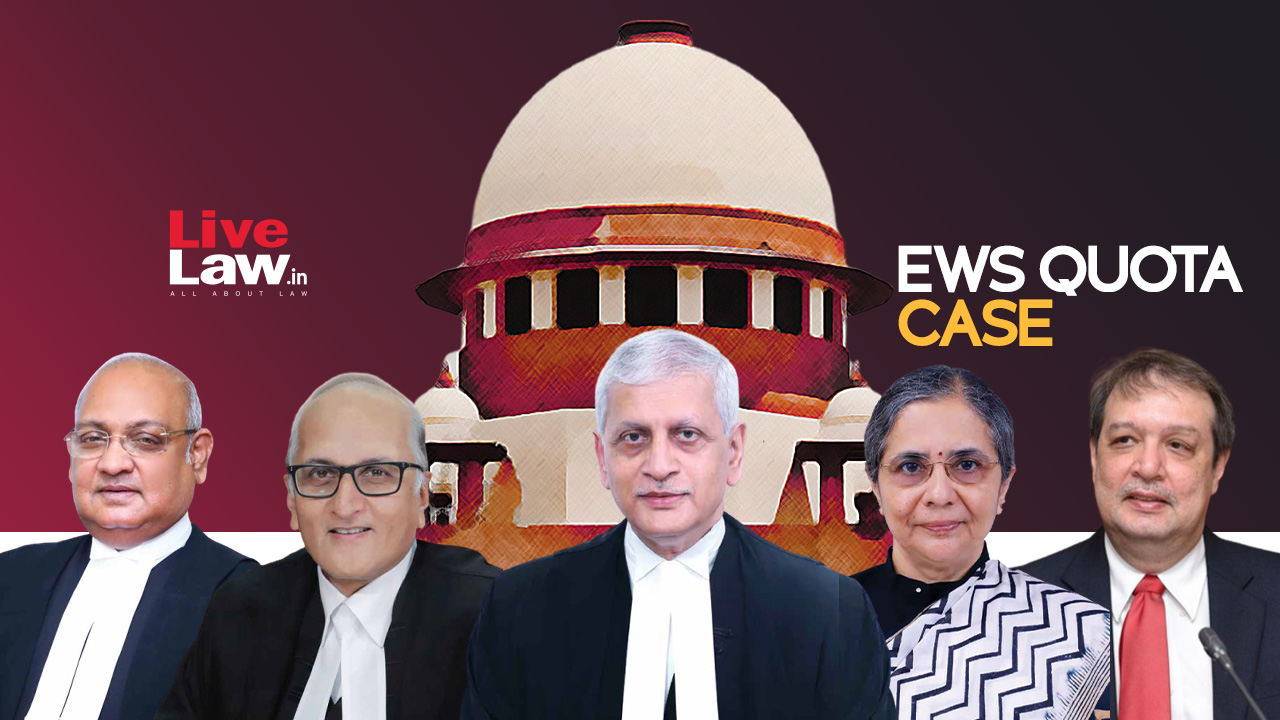 The Supreme Court Constitution Bench has by 3:2 majority upheld the validity of the 103rd Constitutional Amendment which introduced 10% reservation for Economically Weaker Sections (EWS) in education and public employment.

Justice Dinesh Maheshwari stated the there were three main issues in the case :

1. Whether the 103rd Constitution Amendment is violative of basic structure for providing reservation solely on the basis of economic criteria.

2. Whether the amendment is violative of basic structure for excluding the poor among the SC/ST/OBC categories from EWS Quota.

3. Whether the amendment is violative of the basic structure for breaching the 50% ceiling limit.

According to the majority view, the amendment is not violative of the basic structure on any of the above issues.

"Reservation is an instrument of affirmative action by State so as to ensure all inclusive approach. It is an instrument not only for inclusion of socially and educationally backward classes...Reservations for EWS does not violate basic structure on account of 50% ceiling limit because ceiling limit is not inflexible," the majority judgment by Justice Maheshwari said.

Justice Trivedi in her judgment said that the State has come out with amendment for advancement of EWS categories. She observed,

"The impugned amendment has to be treated as an affirmative action by the Parliament for the benefit of EWS class. It cannot be said to be unreasonable classification...Treating EWS as separate class would be a reasonable classification. Just as equals cannot be treated unequally, unequals cannot be treated equally. Treating unequals equally violates equality under the Constitution...The amendment creates a separate class of EWS. The exclusion of SEBCs cannot be said as discriminatory or violative of Constitution."

Justices Trivedi and Pardiwala also made observations in the judgment regarding the need to have a time-span for reservations.

"...while the 'economic criteria' per se is permissible in relation to access of public goods (under Article 15), the same is not true for Article 16, the goal of which is empowerment, through representation of the community", Justice Bhat's judgment stated.

However, by excluding the poor among SC/ST/OBC from economically backward classes (on the ground that they have enjoyed benefits), the 103rd Amendment practices constitutionally prohibited forms of discrimination.

"Our constitution does not permit exclusion and this amendment undermines the fabric of social justice and thereby the basic structure. This amendment is deluding us to believe that those getting social and backward class benefit is somehow better placed. This court has held that 16(1) and (4) are facets of same equality principle. The characterization of excluding the poor of SEBCs is incorrect. What is described as benefits cannot be understood as free pass, it is a compensatory mechanism to reparate...The exclusion is based on social origin which destroys the equality code."

They also opined against breaching the 50% ceiling in matters of reservation. He said, "Permitting breach of 50% would result in compartmentalisation. The rule of right to equality will become right to reservations taking us back to Champakam Dorairajan."

The petitions challenged the validity of Constitution (103rd) Amendment Act 2019. Economic reservation in jobs and education was proposed to be provided by inserting clause (6) in Articles 15 and 16 of the Constitution through the amendment passed by the Parliament in January 2019. The newly inserted Article 15(6) enabled the State to make special provisions for advancement of any economically weaker section of citizens, including reservations in educational institutions. It states that such reservation can be made in any educational institution, including private institutions, whether aided or unaided, except minority educational institutions covered under Article 30(1). It further states that the upper limit of the reservation will be ten percent, which will be in addition to the existing reservations. After the amendment was notified by the President, a batch of petitions were filed in the Supreme Court challenging the constitutional validity of economic reservation.

For summary of the arguments, refer this report

Read Other Reports About The Judgment–

Reservation Solely Based On Economic Criteria Does Not Violate Basic Structure Of Constitution : Supreme Court In EWS Quota Case

Reservation An Exception To General Rule Of Equality; Enabling Provisions Do Not Form Basic Feature Of Constitution: Supreme Court