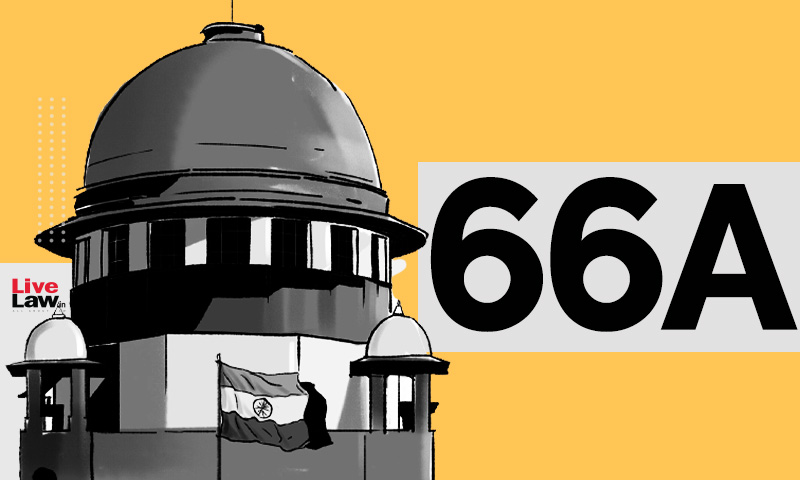 x
The PUCL has filed the present plea seeking directions to the UoI to collect data of all FIRs registered invoking Section 66 A.

The Centre has submitted before the Supreme Court that Police and Police order being state subjects, the primary responsibility to ensure implementation of Shreya Singhal's judgement which had struck down Section 66 A of the IT Act lies with the State. Further, the law enforcement agencies also share equal responsibility to implement the judgement. Centre has made the following...

The Centre has submitted before the Supreme Court that Police and Police order being state subjects, the primary responsibility to ensure implementation of Shreya Singhal's judgement which had struck down Section 66 A of the IT Act lies with the State. Further, the law enforcement agencies also share equal responsibility to implement the judgement.

Centre has made the following submission before the court:

"Police and public order order are State Subjects as per Constitution of India and prevention, detection, investigation and prosecution of crimes, and capacity building of police personnel are primary responsibility of States. The law enforcement agencies take legal action as per provisions of law against the cyber crime offenders and accordingly the LEAs share equal responsibility to comply with the said judgement."

The submission has been made in the counter affidavit filed by the Union of India in an application filed by PUCL seeking various directions and guidelines against the FIRs filed under the struck down provision of Section 66A.

While expressing shock at the practice of police registering FIRs under Section 66A of the IT Act, which was struck down by the top court through the 2015 judgment in the Shreya Singhal case, Supreme Court  had issued notice in the PUCL's plea on 5th July. The Court is scheduled to hear the matter next on August 2nd.

The affidavit has been filed pursuant to the order dated 5th July, 2021 based on inputs from Ministry of Information and Technology as well as the Ministry of Home Affairs. The affidavit has also has provided details of efforts made by both Ministries to disseminate knowledge about the judgement, along with details of pending prosecutions across the country under Section 66A of the IT Act.

Centre has informed Supreme Court that it has directed the Chief Secretaries and Administrators of all States and UTs to direct all police stations not to register cases under Section 66A . The Centre considers it as a vital step taken to sensitise law enforcement agencies and to ensure compliance with judgement of the top Court in Shreya Singhal.

According to the Centre, this was after it approached the Chief Secretaries and Administrators of all States and UTs in 2019, directing them to ensure compliance of the Shreya Singhal judgement. The Centre also requested them for submission of reports to the Ministry on the umber of cases booked under Section 66A of the IT Act, and directing them to withdraw any prosecution invoking 66A.

Further the Ministry of Information and Technology had written to Ministry of Home Affairs in 2016 with a request to intimate Chief Secretaries of States and UTs, law enforcement agencies and concerned authorities about the Shreya Singhal judgement. Since 2015, the judgement has been applauded as setting a benchmark to tackle any usurpations of the rights guaranteed by Article 19(1)(a).

Centre has also informed the Top Court that it has received letters from twenty one States and Union Territories regarding implementation of the judgement.

The Shreya Singhal judgment was delivered by a bench comprising Justices J Chelameswar and RF Nariman striking down Section 66A as violative of Articles 14 and 19(1)(a) of the Constitution. The judgment authored by Justice Nariman held the provision to be vague, overboard and creating an impediment on free speech.

"It is clear that Section 66A arbitrarily, excessively and disproportionately invades the right of free speech and upsets the balance between such right and the reasonable restrictions that may be imposed on such right".

Justice Nariman also observed in his landmark judgement that,

"The Section is unconstitutional also on the ground that it takes within its sweep protected speech and speech that is innocent in nature and is liable therefore to be used in such a way as to have a chilling effect on free speech and would, therefore, have to be struck down on the ground of overbreadth."