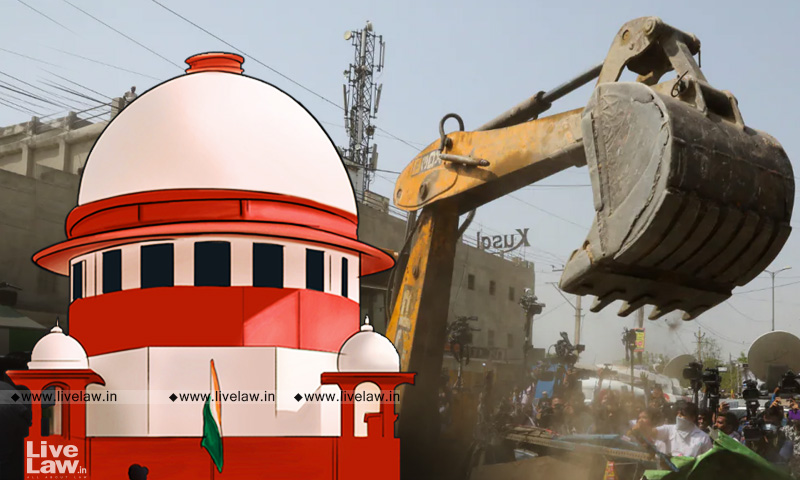 The Supreme Court on Wednesday adjourned the PILs filed by the Jamiat Ulema-i-Hind alleging that authorities in states like UP and MP are resorting to "bulldozer" action to demolish the houses of persons accused in cases like riots for September 7, 2022.

The adjournment was sought by Senior Advocate Sanjay Hedge before the bench of Justices BR Gavai and PS Narasimha due to Senior Advocate PV Surendranath's ill health. The bench also granted Senior Advocate CU Singh time to file rejoinder to the affidavit filed by the respondents.

On July 12, 2022, the Top Court orally asked if it can pass omnibus orders restraining the demolition of unauthorized constructions.

Jamiat Ulema-i-Hind has filed two PILs - one seeking a general declaration that demolition actions cannot be taken as a punitive measure against persons accused of committing offences. The second PIL was filed against the demolition actions carried out by North Delhi Municipal Corporation after the riots during the Hanuman Jayanti processions. After demolition actions were taken against some buildings in Kanpur and Prayagraj, Jamiat filed an application in its petition relating to Jahangirpuri, alleging that the UP authorities were targeting those accused of violence during protests against the remarks of Prophet Muhammed.

In compliance with the Court's order, the State of Uttar Pradesh had submitted before the Supreme Court by way of an affidavit that the recent demolitions carried out in Kanpur and Prayagraj were done by Local Development Authorities strictly in accordance with the Uttar Pradesh Urban Planning and Development Act, 1973. The State had categorically denied that the demolitions were linked to riots and maintained that the process was initiated for violation of the building rules.