It Is Only In This Country That Things Are Very Liberal Where Health Is Concerned: Supreme Court 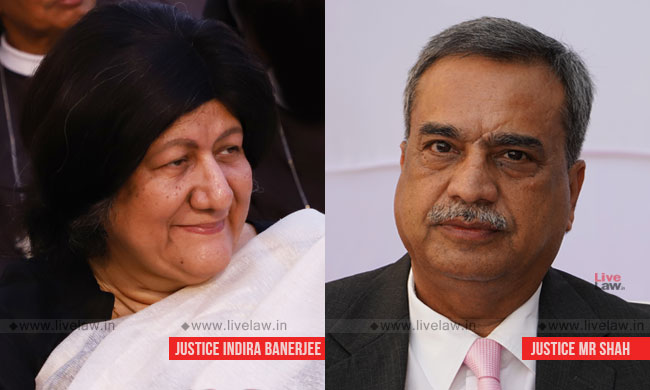 "It is only in this country that things are very liberal where health is concerned", remarked Justice M. R. Shah on Tuesday in a plea for anticipatory bail in a case of adulteration and sub-standard quality of grain. The bench of Justices Indira Banerjee and Shah was considering a plea for anticipatory bail in connection with an FIR under Section 272 (Adulteration of food or drink...

"It is only in this country that things are very liberal where health is concerned", remarked Justice M. R. Shah on Tuesday in a plea for anticipatory bail in a case of adulteration and sub-standard quality of grain.

The bench of Justices Indira Banerjee and Shah was considering a plea for anticipatory bail in connection with an FIR under Section 272 (Adulteration of food or drink intended for sale), 273 (Sale of noxious food or drink), 420 (cheating) and 34 of IPC. It may be noted that both section 272 and 273 are punishable with a maximum imprisonment of 6 months or only with fine of both.
Two applications for anticipatory bail of the present petitioners in connection with the same FIR had come to be dismissed by the Madhya Pradesh High Court on January 25 and March 12 respectively. "Regard being had to the fact that complaint in this case by Food Safety Officer is in relation to seized huge quantity of 120620 kgs wheat of the value of Rs.27,74,260/- seized from the premises of the applicants and upon chemical analysis, the same were found to be sub-standard and misbranded. That apart, investigation is still in progress, complacency of other persons in this organized and systematic activity of preparation of sub- standard food items and possibility of recovery of incriminating material and many more seizures, at this stage, are not ruled out. Besides, this Court finds substantial force in the submission of learned Panel Lawyer that instances of food adulteration, misbranding, false representation, misleading descriptions and dubious sales of such products in public are on rise. Regard being had to the huge quantity of wheat seized apparently, its a vulnerable activity in public domain. Besides, in the obtaining facts and circumstances, contents of the FIR and chemical analysis report, it cannot be said that no case is made out against the present applicants in the FIR lodged. Hence, this MCRC stands dismissed on merits", the High Court said on January 25.
In the subsequent order of March 12, the High Court noted that "The order (of January 25) is self-contained and explanatory. There are no changed circumstances... The allegations against the applicant are serious in nature as well discussed in the order of dismissal passed in earlier application for grant of anticipatory bail... Hence, the application is dismissed on the same grounds on which the application was dismissed on previous occasion i.e. on 25.01.2021"
On Tuesday, Justice Shah expressed incredulity at the relief of anticipatory bail being sought in the facts of the case and the offences of which the petitioners have been accused. "This is a case of adulteration and sub-standard quality of grain and they have come in an anticipatory bail plea!", commented Justice Shah at the outset.
The advocate for the petitioners argued, "The alleged offence only involves the provisions of Food Safety and Standards Act, 2006. Even so far as the IPC is concerned, Sections 272 and 273 are all bailable offences. No case at all is made out under 420! 420 is not at all attracted! Why should the petitioners be incarcerated?"
"Would you and your family eat that grain? Be fair to the court! When you are not willing, should we let the citizens die?", asked Justice Shah.
"That issue would arise upon conviction. And I am not even asking for quashing of the case! I am only on bail", pressed the advocate.
"It is only in this country that things are very liberal where health is concerned. In such cases, no anticipatory bail can be given. Go for regular bail", said Justice Shah.
The bench even refused the plea for protection for a limited period to allow the petitioners time to move the appropriate court for regular bail.
"Please grant me protection for 4 weeks for moving the court for regular bail. Only limited protection for this purpose", pleaded the advocate.
"No, no, no", said the bench.
The advocate sought permission to withdraw the petition and the SLP was dismissed as withdrawn.
Click Here To Download/Read Order
TagsSupreme Court Adulteration Case #Justice M. R. Shah Justice Indira Banerjee
Next Story
Similar Posts
+ View more
Law Firms
+ More