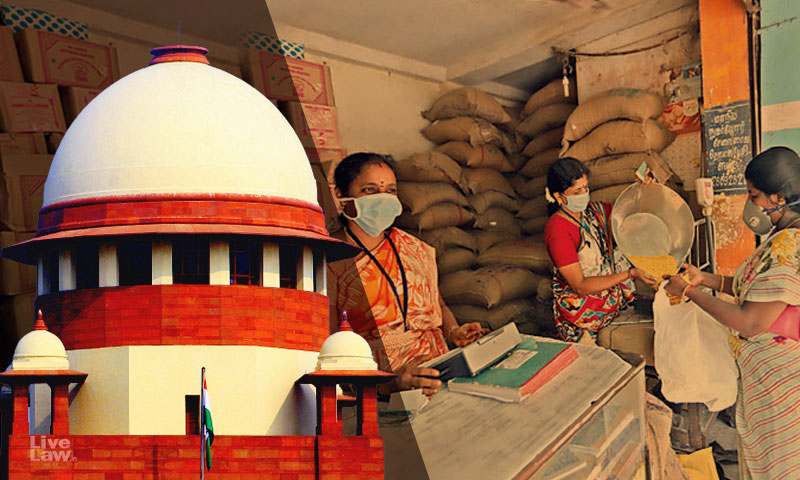 The Supreme Court on Friday observed that all States must implement the" One Nation One Ration Card" scheme, which allows migrant labourers to get ration benefits from any part of the country, irrespective of the place where their ration card is registered.This observation came after Counsels for Maharashtra and Punjab informed the Court that they had implemented the Scheme. When the...

The Supreme Court on Friday observed that all States must implement the" One Nation One Ration Card" scheme, which allows migrant labourers to get ration benefits from any part of the country, irrespective of the place where their ration card is registered.

This observation came after Counsels for Maharashtra and Punjab informed the Court that they had implemented the Scheme. When the Counsel for West Bengal appeared and submitted that a seeding issue for Aadhaar had prevented them from implementing the Scheme, the Bench of Justices Ashok Bhushan and MR Shah stated that no excuses could be given and that all States must implement the same.

The direction was given in the Suo Moto Case – "In Re Problems and Miseries of Migrant Workers".


In today's hearing, Senior Advocate Dushyant Dave raised the issue of non-availability of benefits to those migrant workers who were not registered.


"The 2.8 crore figure that has been counted years back, has been considered sacrosanct. Despite directions in 2018, there has been portal. We have no scientific data to proceed. These are vulnerable sections of society; they are under serious difficulty. The economic situation is far more dire than last year".


In response to the questions posed by the Bench on applicability of the schemes to migrant workers who were not registered, Solicitor-General Tushar Mehta submitted that the Pradhan Mantri Garib Kalyan Yojna had been extended to November and number of migrants had also been identified.


ASG Aishwarya Bhati also supplemented the Centre's submissions by stating that 8 lakh metric tonnes of food grain had been given, and that the manner of distribution had been left to the States.


In response to the opposition by Dave who stated that the Centre was trying to shift the burden to the States, the Court noted that the Union had already provided an undertaking that they would procurement the goods for distribution.


However, the Court only had one concern which was limited to whether those migrant workers who did not have any form of identification would be able to avail the benefits of the schemes. The Court also questioned the Union about the position of the national databased which had been sanctioned in October 2020.


"What is your database? Are you developing the software or collecting the data? Try to explain what is your project. What is the module? Why is taking so many months", asked the Bench.


To this, the ASG responded that it was not merely a software, but a mechanism which would not only recognize the beneficiaries, but also ensure that they received the benefits.


"Statement of the Secretary was recorded that it was ready and it would given to the States. Court also said that unorganized workers would be recorded at 10% every month. Three years have passed. Every State has made their own portal. Please don't accept their excuses. Every State is saying that they don't have access to the Centre's portal", submitted Gonsalves.


The SG agreed with the contention that the portal could not take this much time and submitted to the Court that they would speak with the NIC, and that directions could be given for the completion of the database in a time-bound manner.


Senior Advocate Anand Grover also made submissions on how those who had been registerd under the Code of Social Security could be seamlessly incorporated into the registration scheme by the Centre. He further submitted that for the large number of people are not covered, do not have ration cards or are unaware of the schemes, community kitchens had been set up. The Court informed him that they would consider it.


The Court then proceeded to reserve the judgement in the matter. Parties have been granted 3 days to file a short note.


At the previous hearing, the Supreme Court had directed the Central Government and the State Governments to complete the registration process of unorganized workers so that they can avail the welfare benefits given under various government schemes.

The Court also said that it was necessary to have a Common National Database for all unorganised workers situated in different States in the entire country and that the process initiated by Ministry of Labour and Employment for creating a National Database for Unorganised Workers should be completed with collaboration and coordination of the States.

The Order noted that the Court was of the view that for accessing any benefit percolating from any scheme framed by the Centre or States for the benefit of unorganized workers or migrant workers, registration of the workers is essential.

It was recorded that while different registration processes exist under various statutory acts, no State has been able to give details pertaining to whether registration as a whole under Unorganised Workers Social Security Act, 2008, is complete.

"We are of the view that registration of unorganized workers should be completed as early as possible and there should be a Common National Database for all organized workers situated in different States in the entire country and we are of the view that process which has been initiated by Ministry of Labour and Employment for creating a National Database for Unorganised Workers should be completed with collaboration and coordination of the States, which may serve registration for extending different schemes by the States and Center", the Court had said.

The Court further stated that Section 112 of the Code of Social Security, 2020 contemplates the registration of unorganized workers, gig workers and platforms. Accordingly, the Order states that instructions need to be obtained by the Solicitor-General pertaining to the steps taken regarding the same.

In wake of the above, the Court directed that the Centre may file a detailed affidavit with regard to the same within a period of two weeks.