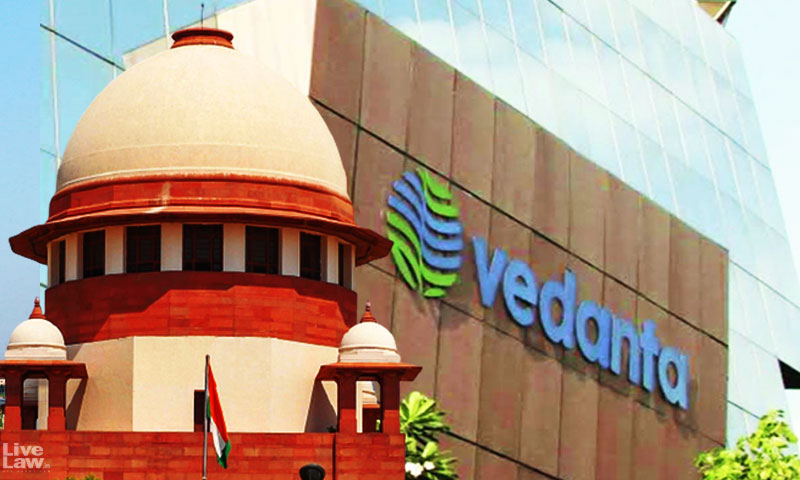 The Supreme Court on Tuesday permitted Vedanta to operate its Oxygen production unit on standalone basis at Copper plant in Tuticorin, which had been closed for 3 years. The permission has been granted in view of acute Oxygen shortage being faced by many states in the country, amid the second-wave of Covid-19.A Supreme Court bench headed by Justice DY Chandrachud passed the order after taking...

The Supreme Court on Tuesday permitted Vedanta to operate its Oxygen production unit on standalone basis at Copper plant in Tuticorin, which had been closed for 3 years. The permission has been granted in view of acute Oxygen shortage being faced by many states in the country, amid the second-wave of Covid-19.

A Supreme Court bench headed by Justice DY Chandrachud passed the order after taking on record the decision taken by the Tamil Nadu government at an an all party meeting, to allow the re-opening of the Vedanta plant for four months for oxygen production.

"Vedanta can open the plant only to produce medical grade oxygen...The order is passed only in view of the national need for oxygen. The order will not create any equities in favour of Vedanta," clarified the Apex Court.

The Committee will also include two environmental experts from Tamil Nadu. The Ministry of Environment and Forests has been directed to form a panel with three environmental experts from Tamil Nadu. From that panel, the organization representing the victims of Vedanta's polluting activites can nominate two members to the oversight committee. If they fail to give the nomination within 48 hours, the Tamil Nadu government will nominate.

The Committee will decide how many personnel should be permitted to enter the plant.

Justice Chandrachud : Mr.Gonsalves, we understand your sentiments. We are alive to your concerns. But this is a national calamity and we all should join our hands.#VedantaSterlite #TamilNaduGovt #SupremeCourt

The direction has come on a plea seeking re-opening of Vedanta-Sterlite's copper plant in Tamil Nadu for the purposes of oxygen production for medical emergency created by Covid19 crisis.

During the hearing, the Bench was informed that the local people were against the plant and State apprehends law and order issues if the plant is opened. On the other hand, Central Government insisted that the plant may be re-opened to augment the oxygen reserve. In this regard, Advocate Harish Salve submitted that Vedanta will be able to produce 200 MT of liquid oxygen within 10 days.

Keeping in view submissions made by both the sides, the Bench ordered MoEF to draw up a panel of three environmental experts from Tamil Nadu and the victims of Vedanta can choose two out of them to be in the committee. "If the victims fail to nominate within 48 hours, TN Govt should nominate two members," the SC added.

In its order, the Supreme Court laid down that:

The Tamil Nadu Govt had allowed the re-opening of the plant yesterday, after an all-party meet. Yesterday, the Advocate General of Tamil Nadu had told the Madras High Court that Vedanta at present has limited capacity for liquid oxygen production, and that the company has assured to take expeditious steps to enhance the same.

Last week, the Central Government has requested the Supreme Court to allow Vedanta to reopen the Sterlite plant to augment the oxygen reserve amid the COVID19 pandemic. The company told the Supreme Court that it was willing to supply oxygen free of cost to save lives.

The Tamil Nadu Government had objected to the reopening of the plant. Senior Advocate CS Vaidyanathan, appearing for the TN Government, had told the Supreme Court that there will be law and order issues in Tuticorin if the plant is allowed to be re-opened, as the local people have a lot of resentment against the company due to the environmental problems created by it and also the firing incident of 2018 which claimed around 18 lives.

On April 23, a bench led by CJI Bobde did not appreciate the stand of Tamil Nadu Government. The bench said that human lives were more important and observed that the State Government should take over the plant for oxygen production.
The plant was shut down on account of violation of environmental norms. In August 2020, the Madras High Court had dismissed Vedanta's petition seeking reopening of the plant. Challenging the High Court verdict, the company filed special leave petition in Supreme Court. The Supreme Court has rejected twice the interim applications filed by the company seeking to re-open the plant.

The twitter thread of the complete updates from the hearing may be read here:

Bench takes up the #VedantaSterlite case.