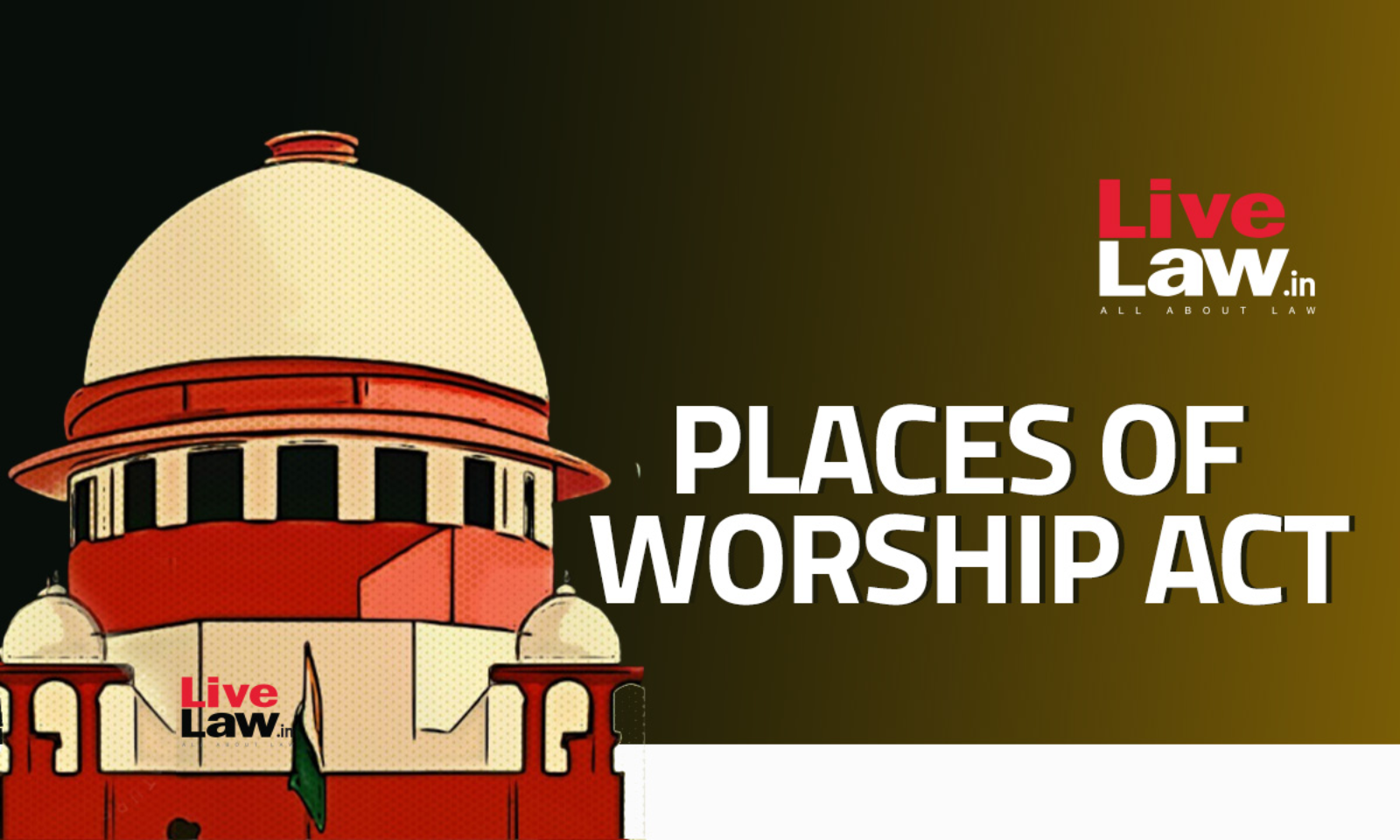 The Supreme Court on Monday adjourned the hearing in a batch of petitions challenging the Constitutional validity of provisions of the Places of Worship (Special Provisions) Act 1991 after the Union Government sought for time to file its counter-affidavit.

During the mentioning round before the Chief Justice of India, Solicitor General of India Tushar Mehta requested for adjournment in the case. "I need to consult with the Government for filing a detailed counter. I would need consultation at higher level. If some time can be given", SG Mehta submitted.

The bench led by CJI DY Chandrachud directed the Union to file its counter-affidavit by December 12 and posted the matter in the first week of January 2023.

"The Counter affidavit is to be filed by the Union Government by 12th December, 2022 and be listed on first week of January, 2023. The counter is to be circulated to all counsels a week prior to the listing", the bench stated in the order.

On October 12, a bench led by the then Chief Justice of India UU Lalit had directed the Union to file its counter-affidavit by October 31. Earlier, on September 9, the Court had asked the Centre to file its response within 2 weeks.

Questions Raised For Consideration by the Petitions

1. Whether the parliament was legislatively competent to enact The Places of Worship (Special Provision) Act 1991 as the Act deals with subject matters mentioned in the State List (List-2) of 7th schedule of the Constitution which are all in the Exclusive domain of the State Legislatures?

2. Whether the Act is violative of Article 14 in as much as it discriminates in a hostile manner by restricting the operation of the Act to all States other than the State of J&K?

3. Whether the bar of conversion of places of worship imposed by Section-3 read with Section 2(b) is violative of Articles 14, 21, 25, 26 and 29(1) of the Constitution in as much as it assumes, contrary to settled law relating to dedication of temple and temple property to the Idol, which never dies, that seeking reclamation or restoration of the temples destroyed by Muslim invaders , specially by Aurangzeb, would amount to seeking conversion of the place of worship and thereby putting an imprimatur on the destruction of the Hindu temples and the building of structures on the temple land for offering prayers by another community? Whether this would amount to depriving the temples and the Idols of their property without any public purpose and would violate Article-300 A of the Constitution?

4. Whether the Cut-off date 15-8-1947 fixed by Section 4(1 ) of the Act is discriminatory and manifestly arbitrary and violative of Article 14, 21, 25, 26, 29(1) of the Constitution of India as for approximately 4 centuries prior to the said date the people of India were not free and subjects of initially the Mughal invaders and thereafter of British imperialists and were not in a position to seek retrieval and reconstruction?

5. Whether the second part of Section 4(2) which bars suits, appeals and other legal proceedings with respect to reclamation of place of worship is violative of Article 14, 21, 25 ,26, 29(2) in as much as it denies access to the Court of justice for peaceful resolution of disputes and redressal of wrongs committed by Muslim invaders on religious grounds by use of force?

6. Whether Section 4 (2) of the Act is violative of Articles 14, 21, 25, 26, and 29(2) of the Constitution in as much as it mandates the abatement of pending disputes in relation to place of worships in the Courts and thereby legislatively perpetuates the destructions of prime temples and the building of structures on the temple land by use of temple materials by the Muslim invaders by use of force resulting in adversely impacting the fundamental rights of Hindus to religion and worship?

7. Whether the second part of Section-4 (2) would envelop proceedings under Article 226 and Article 32, which is a fundamental right under the Constitution?

8. Whether the proviso to Section 4( 2 ) which allows suits, appeals and legal proceedings to continue where conversion has taken place in the religious character of place of worship after 15-8-47 despite its potentiality to disturb public order, and breach communal harmony whilst shutting out litigations relating to conversions which took place in the past as a result of invaders atrocities amounts to hostile discrimination as between two classes of litigation, and this has no relation to public order and communal harmony? Whether Section- 5 of the Act makes invidious discriminations by treating Ram Janam Bhumi dispute as a "Class by itself" while excluding from the exemption prime temples like Kashi Vishwanath (One of the 12 Jyotirlingas ) and Krishna Janm Sthan which are equally, if not more, important temples whose destruction by invaders is more soundly evidenced and recorded in history?

9. Whether the abatement of pending suits and other legal proceedings would result in a decision of cases by legislative fiat and without following any procedure of adjudication and would be contrary to basic feature of Rule of Law and Judicial Review? Whether the right to worship, profess, practice and propagate religion and manage religious affairs guaranteed by Articles 25(1) and 26 of the Constitution and the right to conserve one's own culture guaranteed by Article 25 (1) would include the right to reclaim and reconstruct temples (which are a continuity) destroyed by Muslim invaders?

10. Whether Suits seeking restoration and reconstruction of or for worship in the temples destroyed and demolished by the Mughal invaders would amount to "conversion" within the meaning of the term as defined in the Act?

Case title: ASHWINI KUMAR UPADHYAY Versus UNION OF INDIA AND ORS. W.P.(C) No. 1246/2020 and connected matters