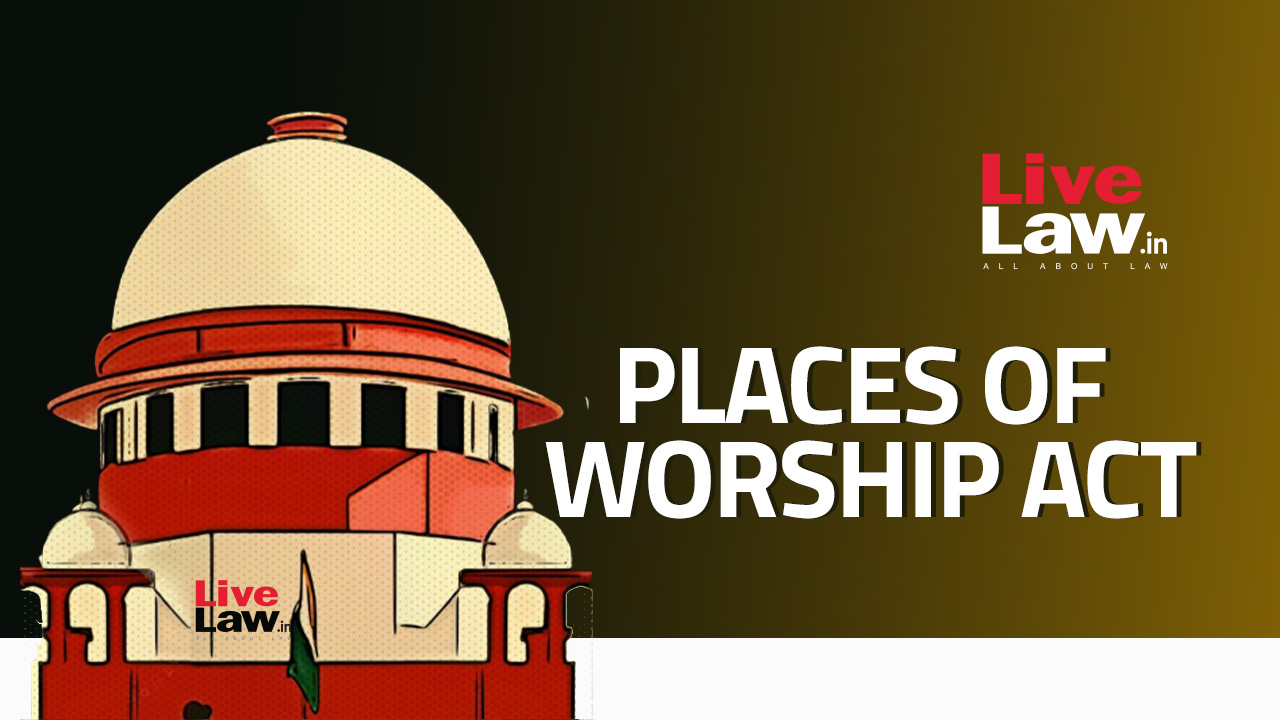 The Supreme Court bench, comprising Chief Justice U.U. Lalit, Justice Ravindra Bhat and Justice P.S. Narasimha has listed a batch of petitions challenging the Constitutional validity of provisions of the Places of Worship (Special Provisions) Act 1991 for October 11, 2022. The court has also directed the Union of India to file a response in two weeks. The petitions have been filed against the Act inasmuch as it bars remedies against illegal encroachment on the places of worship and pilgrimages prior to August 15, 1947.

The bench considering the writ petitions filed by former BJP Delhi Spokesperson Ashwini Upadhyay, BJP Rajya Sabha MP Dr.Subramanian Swamy and some others challenging the Places Of Worship Act 1991. Apart from these, there were nearly 15 impleading petitions filed by parties either in support of opposition of the law.

In the proceedings today, Advocate Ejaz Maqbool, appearing for Jamiat Ulema-i-Hind (which is seeking to intervene in the matter), submitted that the Supreme Court's judgment in the Babri Masjid-Ram Janambhoomi case has upheld the Constitutional validity of the law. Senior Advocate Rakesh Dwivedi, appearing for Upadhyay, submitted that those observations were obiter dicta.

Dr Subramanian Swamy submitted that he has made a prayer for reading down the law to exempt Kashi and Mathura temples, like the exemption given for Ayodhya dispute. Advocate J Sai Deepak, appearing for the daughter of Kashi Royal family, submitted that exempting only Ayodhya Ram Mandir from the Act results in discrimination against other Sanatani denominations who regard temples at Kashi or Mathura as more revered.

Advocate Vishnu Shankar Jain, appearing in one petition, informed the bench that the Varanasi Court has reserved judgment on the maintainability of the suit relating to Gyanvapi mosque. He added that he is challenging the law on the ground that the right of judicial review cannot be taken away and said he is relying on Minerva Mills case judgment.

The bench asked Solicitor General of India Tushar Mehta if the Centre has filed its response, to which the SG replied in the negative.

"We will issue notice in all these IAs. Today we are in combination of three but it should be with two judges. It has been pointed out that there are certain paras in Ayodhya judgement where the attention of the court was invited to legislation. Other side disagrees. These are matters to be taken up. So we will make that observation. Whether it comes before us cannot be said. But it will come before three judges", CJI Lalit said.

Accordingly, the CJI read out the order which states as follows:

"A bench of two judges of this court issued notice in the matter on 12th March 2021. Thereafter this petition has been coming up on few occasions. However Union of India has not put in any response. The Solicitor General, Tushar Mehta has been granted two weeks to file affidavit. Rejoinder to be filed a week thereafter, if any. There is a host of applications seeking impleadment. We allow all these applications and give liberty to concerned applicants to intervene. The intervenors are to file written submissions which shouldn't exceed 5 pages. WP (C) 559/2020 raises similar issues. We therefore formally issue notice in that Writ Petition. Considering the issues involved in the matter, in our view the matter is suitable to be heard by 3 judges. Copies of all intervention applications may be digitally shared with all counsels. The registry is directed to list the matter before appropriate bench on 11th Oct 2022. In the meantime, all parties are directed to complete pleadings in the matter so that matter can be considered on the next date."

The CJI also orally remarked that–

"These are preliminary dates. Nothing will happen on these dates..."

The plea filed by Ashwini Upadhyay, in particular challenges Sections 2, 3 and 4 of the Act stating the same take away rights of Hindus, Jains, Buddhists, and Sikhs to reclaim their places of worship through Courts.

The plea submits that the impugned provisions create an arbitrary, irrational retrospective cut-off date and legalize the illegal acts of invaders who encroached upon religious institutions back in the day. It is thus alleged that the provisions violate the basic principle of Secularism and are contrary to the State's duty to protect historic places under Article 49 and to preserve religious cultural heritage under Article 51A of the Constitution.

Case title: ASHWINI KUMAR UPADHYAY Versus UNION OF INDIA AND ORS. W.P.(C) No. 1246/2020 and connected matters