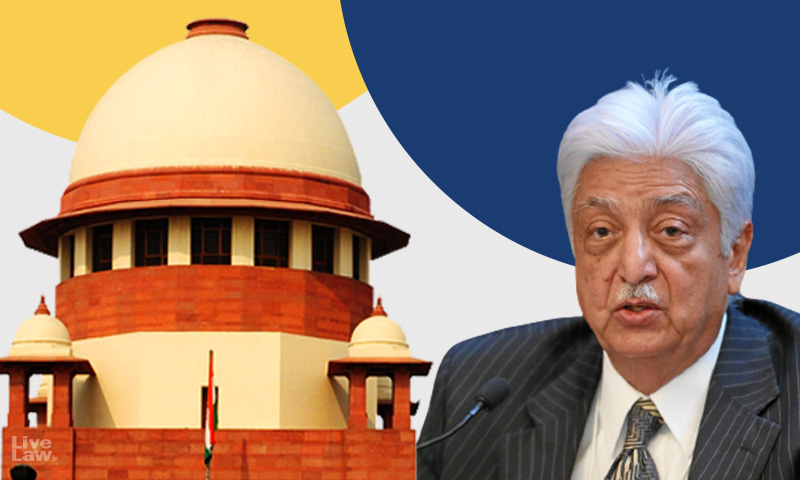 The Supreme Court today extended the interim order of stay on the criminal proceedings before the court of an Additional City Civil and Sessions Court, Bengaluru, against WIPRO's founder Azim Premji, his wife and others on a private complaint over allegations of illegally transferring crores of rupees worth assets from three companies into a private trust and newly formed company.In...

The Supreme Court today extended the interim order of stay on the criminal proceedings before the court of an Additional City Civil and Sessions Court, Bengaluru, against WIPRO's founder Azim Premji, his wife and others on a private complaint over allegations of illegally transferring crores of rupees worth assets from three companies into a private trust and newly formed company.

In December last year, the Supreme Court had stayed the criminal proceedings, while issuing notice on Azim Premji's petition challenging the Karnataka High Court's refusal to quash the summons.

A bench comprising Justices SK Kaul and MM Sundresh also also directed the respondent NGO "India Awake For Transparency", which filed the complaint against Premji and his company, to file their reply in contempt proceedings initiated by the division bench of Karnataka High Court against it for indulging in forum shopping by filing multiple petitions against Premji for the very same cause of action till October 18, 2021.

"We are informed that contemners have not filed any reply in the contempt notice but have filed an application seeking recall of the order. In such case, let them file the reply before 18th when the matter is taken up before the High Court and let the same be placed on record before the Division Bench of High Court," Court in its order noted.

When the matter was called for hearing, Senior Advocate S Ganesh appearing for Azim Premji while reading relevant paragraphs of the synopsis apprised the Court of the criminal contempt proceedings that are pending before the division bench of Karnataka High Court against the respondent NGO.

"Directions were issued in the criminal contempt proceedings and they have not been followed. Now they have filed another appeal seeking recall of the order," Senior Counsel further submitted.

Drawing the Court's attention to the amount of cost that had been imposed by the Court on the NGO India Awake For Transparency, Senior Counsel said, "This is the most blatant process I have ever encountered."

Justice Kaul, the presiding Judge of the bench at this juncture asked Advocate R Subramanian appearing for the NGO India Awake For Transparency as to whether the NGO had paid the cost that was imposed by the Court and the status of the criminal contempt proceedings.

"SLP's have been filed against the Cost order on September 27, 2021," replied Advocate R Subramanian for the NGO. He further submitted that the matter of criminal contempt proceedings was slated to be heard by the division bench of the Karnataka High Court on October 19, 2021.

"At the moment, we'll continue granting a stay and we need to see what happens in the other appeals that are pending before the Division Bench of the High Court," remarked Justice SK Kaul.

During the course of the hearing, Senior Counsel appearing on behalf of Premji also sought for issuance of directions for not initiating any proceedings against Azim Premji till the next date of hearing before the Division Bench of Karnataka High Court.

"Every day there are new proceedings that are being filed in Karnataka, Delhi, Mumbai. Please pass an order for not initiating any proceedings till 20th," submitted Senior Counsel.

The trial court had issued a summons on January 27 against the four ( Premji, his wife, Pagalthivarthi Srinivasan and Regional Director of Ministry of Corporate Affairs M R Bhat) based on a private complaint filed by Chennai-based company India Awake For Transparency, about allegations of illegally transferring crores of rupees worth of assets from three companies into a private trust and a newly formed company. It was alleged in the complaint that Premji, his wife, and Srinivasan were entrusted with the dominion over properties and assets of three companies as directors.

They were holding assets of these three companies of a total worth Rs 31,342 crore in a fiduciary capacity, without having any financial interest or ownership therein, the complaint said. Based on the private complaint alleging that the accused had committed offenses punishable under Sections 409, 34 read with 120B IPC and Section 13(1)(d) read with Section 13(2) of the Prevention of Corruption Act, the trial court issued summons to Premji and others. They have challenged it before the high court. In the HC, the counsel for the accused argued that the allegations made in the complaints, even if they are taken at their face value and accepted in their entirety, do not prima facie constitute any offences or make out a case against the accused 1 to 4.

The Karnataka High Court on February 12, 2021 had imposed acost of Rs 10 lakh on not for profit company India Awake For Transparency, for filing multiple petitions on the very same cause of action, seeking to register a case against the Founder-Chairman of Wipro Company, Azim Premji and others.

The Court noted that the NGO had filed multiple writ petitions in the High Court seeking criminal actions over allegations of financial irregularities in companies run by Azim Premji. Despite the dismissal of those petitions, the petitioner filed a fresh writ petition with similar allegations in substance.

The learned Single Judge had also observed that petitioner is indulging in forum shopping on the very same cause of action and this amounts to criminal contempt as the core issue in all these writ petitions is one and the same."