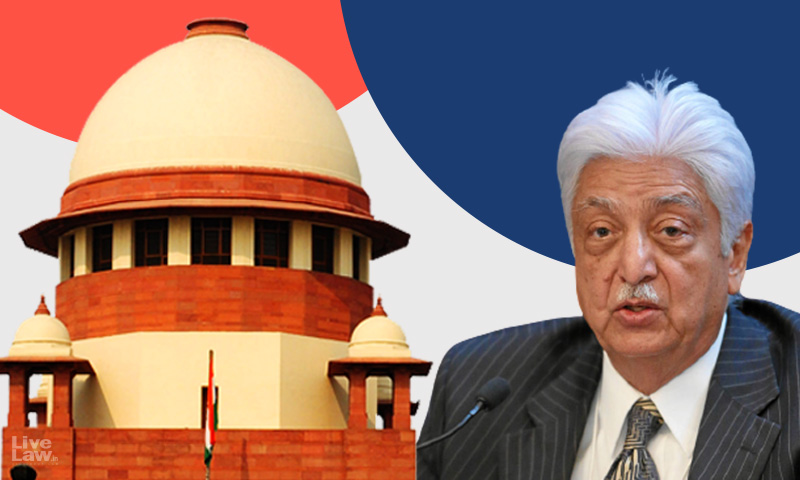 On Tuesday, the Supreme Court suggested a settlement be reached between Azim Premji and the NGO India Awake Transparency which is facing contempt proceedings for filing multiple frivolous complaints against the ex-Chairman of Wipro.The Court was considering a special leave petition filed by Azim Premji and his wife Yaseem Azim Premji challenging a criminal complaint filed by the NGO. The...

On Tuesday, the Supreme Court suggested a settlement be reached between Azim Premji and the NGO India Awake Transparency which is facing contempt proceedings for filing multiple frivolous complaints against the ex-Chairman of Wipro.

On the earlier occasion, the Bench comprising Justices Sanjay Kishan Kaul and M.M. Sundresh observed that the NGO had initiated numerous ancillary proceedings to obfuscate the contempt proceedings before the Karnataka High Court. In view of the same, the Court had issued directions to the High Court for faster disposal of the Contempt Case.

At the outset Senior Advocate, Mr. S. Ganesh appearing on behalf of Azim Premji apprised the Court that pursuant to its last days' order, the High Court had heard the contempt matter and reserved judgment in the same.

"Pursuant to the detailed directions given by my lord on the last occasion, the criminal petition has been fully heard and judgment has been reserved by the Karnataka High Court."

He further added that a subsequent development has taken place, whereby the Counsel for the Respondents, Mr. R. Subramanian has been charged by a trial court in Bangalore under Section 138 of Negotiable Instruments Act and sentenced to 2 years of imprisonment with fine of Rs. 62 crore.

"A subsequent development that has taken place, Mr. R. Subramanian who appears for the Respondent from the other side of the offence under S. 138 for dishonour of dishonoured cheques given to us, the trial court in Bangalore sentenced him to 2 years imprisonment and imposed a fine of 62 crore."

Mr. Subramanian asked Mr. Ganesh, "How does that have any relevance with the current petition?"

The Bench responded stating, "All this is relevant in the manner you have taken the proceedings."

Mr. Ganesh informed the Court that as directed by the Court,  both the parties have filed synopsis. Interestingly, in the synopsis filed by the Respondent, they have made an admission that goes to the very root of the matter.

"We come back to our criminal appeal. We have filed a 2 page synopsis each. In his synopsis he has made a very important admission, which I submit goes to the root of the whole case and as a result of which I would be in a position to complete my entire argument in just 10-15 min."

Reminding the Counsel that the matter was listed for direction and not for hearing, the Bench stated -

"Let us see what the directions are. As far as the criminal contempt is concerned the order stands reserved."

Thereafter, the Bench recorded the submissions made by Mr. Ganesh -

"We are informed by learned counsel for appellant the hearing in the criminal contempt case stands concluded and judgment stands reserved. It is his further submission that he would like to point out to the Court that the Counsel for respondent stands convicted for a cheque bouncing case which has been placed on record by I.A…sentencing him to 2 years imprisonment and a fine of 62 crores. It is his plea that it is the cheque bouncing case that has given rise to a vendetta…a position naturally disputed by the Counsel appearing for the respondent."

"I want to point out that in the synopsis he has made a candid admission."

The Bench opined, "Next day when we hear the matter, we will listen to the candid admission."

"Ld. Counsel also submits that synopsis have been filed by both the sides and he will take even less time than specified on last date as he perceives that there are some admission in the synopsis. That is to be considered at the stage of hearing".

Advocate, Dr. R. Prakash appearing for M.R. Bhat submitted that as per the direction of the Supreme Court he has filed an application for direction seeking pensionary benefits, which were withheld by the Government of India, due to the pendency of the present proceedings.

"In the last hearing, your lordship asked me to file an application for direction. The pensionary benefits are withheld because of the pendency of this case."

"Ld. Counsel in…(one of the appeals) submits that he had moved an I.A….in view of what has transpired on the last date. The conspectus of his application is limited. It is related to the gratuity amount payable to the applicant along with commutation of pension. The applicant has retired from the post of Regional Director…. and these two amounts are withheld. There are stated to be also some amount; grant of non-functional upgradation and loss of higher pensionary benefits. He has drawn out attention to Annexure A1…where the undersecretary of Govt of India had referred to the pensionary papers stating it is not clear whether it is pending from vigilance angle without the present proceeding. In the conspectus of the matter we are of the view that all the necessary amounts ought to be remitted and the present or pending proceedings should not come in way of payment of this. The pendency of the present proceedings, the impugned order being stayed would not stand in the way of any post retirement opportunity of the appellant…Application stands disposed off."

Explaining the urgency in the matter Mr. Ganesh submitted -

"My lords have stayed the proceeding before Trial Court. I want to explain the urgency of the matter…As a result of the pendency of the prosecution we are facing serious problems in our business. In two acquisitions we have to make a declaration about the fact that criminal prosecution is pending and we cannot explain how frivolous it is. Therefore, shortest possible date."

The Bench enquired, "What kind of order do you want?"

Mr. R. Subramanian appearing for the Respondents informed the Court that a counter affidavit had been filed by him in M.R. Bhat's matter -

"In Mr. Prakash's client we have filed a counter. It is not to say that he should not get his money, because the fraud we are trying to prosecute is some 31000 crore and this is some 55 lakhs. This has no connection with that…"

The Bench noted, "A counter affidavit has been filed by the Respondent, but it is our view that it should not be an impediment for the order passed by us."

"After Karnataka HC…passed an order framing charges, leaving out the respondents in these criminal appeal from being charged. The Karnataka HC has chosen to charge only me as the advocate. At the time I had filed an application in my personal capacity. That can be withdrawn now as they have become infructuous. My contentions can be left open."

The Bench decided to take up the matter once again for directions and then finally dispose of it, hoping that in the interim the Karnataka High Court would pass the order in the contempt proceedings.

"You would not know when the judgment is expected from the Karnataka High Court. What we will do is, we will keep it one more time for direction. See what the result of that proceeding is. We will try to conclude within the financial year subject to how the courts are functioning."

With respect to Mr. Subramanian's conduct the Court made some observations -

"What is happening Mr. Subramanian. It is not for us to advise you. But, you have a fairly intelligent mind, please think of how you can put it to better use. This is creating a problem for you. In trying to have some kind of proceeding continuously launched you are landing into a greater amount of soup is what is happening. That is all we will say."

Mr. Subramanian admitted that he had proposed to give quietus to the matter. Unfortunately, the same has not found favour with Mr. Premji.

"What I had said was that we will give quietus to all proceedings -whatever I have launched, whatever they have launched and go our different ways. Unfortunately, that was not acceptable to Mr. Ganesh's client. Otherwise, I am saying that I have had enough of this. This has taken away all my professional time."

Mr. Subramanian put forth a proposal to settle the matter by withdrawing all the proceedings -

"Purely a request I am making to your lordship that I am willing to ensure all actions from our side are withdrawn. All we would request is that all actions against us are also withdrawn and be completely give quietus to these inter-se proceedings. I made a request, Mr. Ganesh can communicate to his clients that I will do everything from my side to get over all of this."

The Bench observed, "Prima facie the only amendment appears to be the cheque that has been dishonoured."

Mr. Subramanian agreed. He informed the Court that it is not that he does not want to pay in the cheque bounce matter, but given his financial position he is unable to make the payment.

"To be very candid I have zero assets. Not that I don't want to pay. Mr Ganesh said that I have 49 companies. I can hand over the 49 companies to his clients because I don't have assets in them also. My case is that of inability, not unwillingness."

Advising Mr. Subramanian to start with a clean slate, the Bench remarked -

"By launching these cases how do you establish inability. You are digging deeper into it…Your business has failed..if you want to begin your life again on a clean slate, you have the mental ability to begin the life you. If the mental ability is used for negative purpose it would not let you start a life again."

"Discuss it with your client if a quietus can be put to this . I know there is angst on both side."

The matter is to be listed for direction on 8th February.