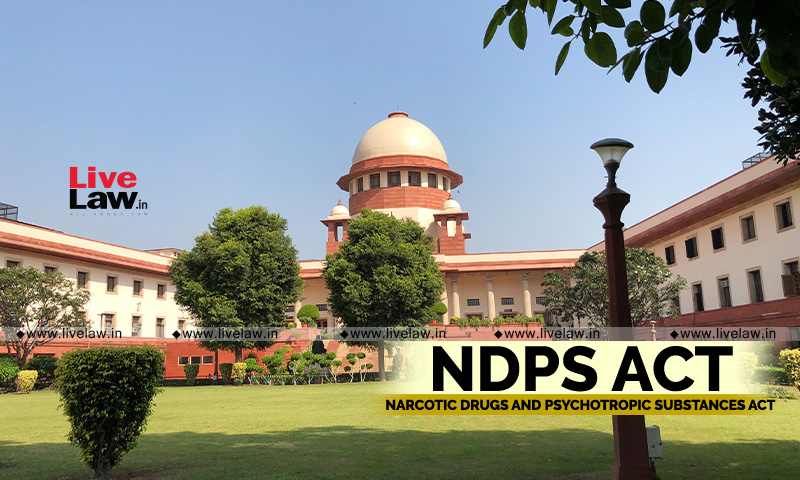 The Supreme Court on Tuesday granted bail to a 23 year old Syrian national staying in Delhi who was in custody since September 27, 2018 for his alleged involvement in trafficking of commercial quantities of contraband i.e. 50 kgs 800 gms.Considering that although the charge sheet was filed in 2018 but no trial had commenced, the bench of Justices SK Kaul and MM Sundresh granted bail.The bench...

The Supreme Court on Tuesday granted bail to a 23 year old Syrian national staying in Delhi who was in custody since September 27, 2018 for his alleged involvement in trafficking of commercial quantities of contraband i.e. 50 kgs 800 gms.

Considering that although the charge sheet was filed in 2018 but no trial had commenced, the bench of Justices SK Kaul and MM Sundresh granted bail.

The bench had also considered that the co-accused Arjun Elawadi who was the alleged manufacturer and supplier of the banned substance and who allegedly financially gained from the alleged transaction was granted regular bail by the Court.

"What persuades us to pass an order in favour of the appellant is the fact that despite the rigors of Section 37 of the said Act, in the present case though charge sheet was filed on 23.09.2018 even the charges have not been framed nor trial has commenced. The manufacturer who sold the drugs to the appellant during the sunset clause himself has been granted bail," bench in their order said.

The bench also said that bail was granted to the appellant on terms and conditions to the Trial Court's satisfaction.

"Amongst the terms will be included the requirement of the appellant to report every Monday in the forenoon alternate week and mark his presence before the officer concerned. We take it that the passport and travel documents are already deposited by the appellant and if not deposited, the same should be deposited including the refugee certificate," court further said.

The bench granted the relief in the Special Leave Petition filed by the accused challenging the Delhi High Court's order of dismissing his application for bail on the ground that he was involved in trafficking of commercial quantity of contraband i.e. 50 kgs 800 gms and it could be said that there was no legally admissible evidence against the petitioner to show his complicity in the alleged offence.

The petitioner had approached the Delhi High Court seeking regular bail in a case registered under Sections 22/23/29 NDPS Act on a complaint filed by the NCB.

Seeking bail, the petitioner's counsel had contended that the petitioner was a 23 year old Syrian national staying in Delhi as a refugee pursuant to registration and verification by the UNHCR since 2015 and had been falsely implicated in the case by NCB. It was also his contention that he was in custody since 27th September, 2018 and the trial was likely to take a lot of time. He also contended that no recovery was made from the petitioner and thus no case was made out against the petitioner.

It was also counsel's contention that the only evidence linking the petitioner to the contraband recovered was the statement recorded under Section 67 of the NDPS Act by the officer of the respondent which in view of the Top Court's decision in Tofan Singh Vs. State of Tamil Nadu was inadmissible in evidence and could not be used to implicate the petitioner.

The prosecution's case was that NCB on September 24, 2018 had received a secret information that a Turkish national, namely, Erbil Han aged about 27 years who was departing from IGI Airport by Turkish Airlines was suspected to have concealed a huge quantity of narcotics or psychotropic drugs in his baggage. Pursuant to receipt of necessary permission from Superintendent, a team was deputed and Erbil Han was intercepted, however nothing was recovered from his personal search.

When his red colour trolley bag was opened, it was found full of tablets which were kept in bundles of 10 strips and bound with a rubber band and each strip contained a Tramadol Hydrochloride tablet with a manufacturing date of July 2017 and expiry date of June 2020. In total 6500 strips with each strip containing 10 tablets were recovered.

Another black colour trolley bag of Erbil Han was opened which also contained 1900 strips of 10 tablets each with manufacturing of July 2017 and expiry of June 2020 and the tablets were of Tramadol X – 225.

Ebril Han in his statement u/s 67 of the NDPS Act had disclosed petitioner's name alleging that he gave him tablets on the night of 23rd September, 2018.

The bench of Justice Mukta Gupta while dismissing the petitioner's application took note of the fact that there was substantive evidence against the petitioner dehors the statement under Section 67 NDPS Act in the form of CCTV footage and the photos in the mobile phone of the petitioner.

"Contention of learned counsel for the petitioner that no invoice, voucher, etc, of the sale of trolley bags were recovered would not be sufficient to discard the recovery of the guarantee cards which were found in the trolley bags and from which the petitioner could be traced," the bench had further observed.