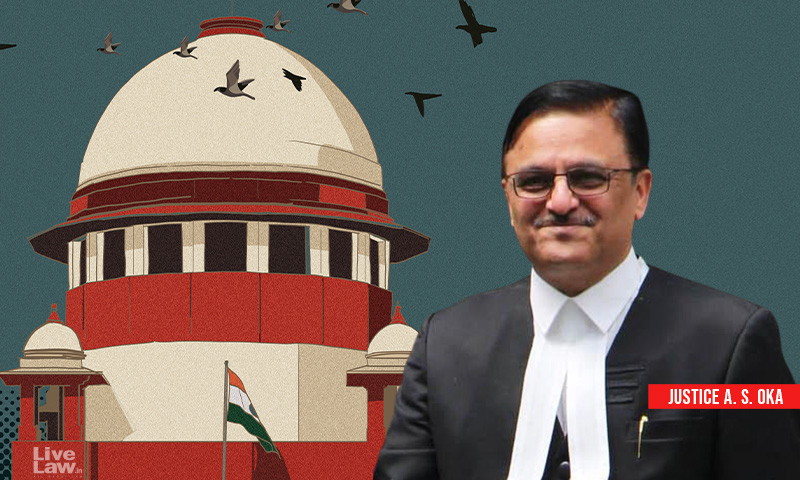 Justice A. S. Oka on Monday recused from the hearing of state of Karnataka's challenge to the December 4, 2020 decision of the Karnataka High Court directing the State Election Commission to hold elections of Bruhat Bengaluru Mahanagara Palike as expeditiously as possible by publishing election programme within six weeks from the date of publishing of final list of Electoral rolls.Elections...

Justice A. S. Oka on Monday recused from the hearing of state of Karnataka's challenge to the December 4, 2020 decision of the Karnataka High Court directing the State Election Commission to hold elections of Bruhat Bengaluru Mahanagara Palike as expeditiously as possible by publishing election programme within six weeks from the date of publishing of final list of Electoral rolls.

Elections were to be held for 198 wards, as per notification of delimitation of ward already published.
The Supreme Court had on December 18, 2020 stayed the December 4, 2020 judgment of the Karnataka High Court which directed holding of elections to 198 wards in BBMP within six weeks.
When Karnataka's SLP and other connected matters came up for hearing on Monday before the bench of Justices A. M. Khanwilkar and A. S. Oka, the bench passed an order for the matter to not be listed before Justice Oka.
In the December 4, 2018 judgment, the division bench of then Karnataka High Court Chief Justice A. S. Oka and Justice S. Vishwajith Shetty upheld the constitutional validity of Karnataka Municipal Corporation Third Amendment Act, 2020, (Amendment Act).which increased the wards in the BBMP. However, it said "It will have to read it down by holding that it will not apply to elections of corporations which ought to have been held as per Article 243 of the Constitution, before the Amendment Act came into force." The bench directed the state government to publish final notification of reservations for 198 wards as per delimitation notification date 23 June 2020 within one month. The bench declined to impose a cost on the state government which was to be paid to the State Election Commission, due to the cash crunch faced by the state due to Covid-19 pandemic. The order was passed while hearing a batch of petition seeking directions for timely holding of elections of BBMP. Even the State Election Commission (SEC) has filed a plea.

Advocate General Prabhuling K Navadgi, appearing for the state, had supported the Karnataka Municipal Corporation Third Amendment Act, 2020, (Amendment Act). He argued that a validly constituted legislation can only be struck down on three limited grounds – for lacking legislative competence, violating the Fundamental Rights and if found to be 'manifestly arbitrary'.

Further he had submitted that in the absence of such a finding on these limited grounds, the government cannot be directed to ignore a law validly enacted by the State Legislature. Article 243-U cannot be read in isolation. The various provisions of Part IX-A must be read as a whole and must be given effect to.

He had also said that on a holistic reading, it is clear that proper delimitation of wards, is also an essential feature of Part IX-A. There is no objection to the prayer that timely elections must be held, and the State Government would be welcome any directions as to the timelines within which, new delimitation process and subsequent elections are to be held. The delay caused was only due to the COVID-19 pandemic, which created extraneous circumstances. The number of wards has been increased from 198 to 243.

Senior Advocate Prof Ravivarma Kumar, appearing for one of the petitioners, had argued that as per Article 243-U (3), there is a mandatory obligation on the part of the State government to ensure that the elections to the BBMP are conducted before the expiry of such term, i.e. before September 10 in the present case.

The steps to conduct elections ought to have been taken several months in advance so as to facilitate the conducting of elections before the said date. However, till date, absolutely no steps have been taken on the part of the State to prepare electoral rolls, to notify reservations, etc. to the 198 wards in Bengaluru. The respondents have disobeyed to fulfill their constitutional duty of conducting timely elections.
On December 18, 2020, the bench headed by the Chief Justice of India stayed the directions in the High Court judgment while issuing notice on the special leave petition filed by State of Karnataka.

"Issue notice. Until further orders, there shall be a stay of operation ofthe impugned judgment(s) and order(s) passed by the Karnataka High Court", stated the order passed by the bench after hearing Solicitor General Tushar Mehta who appeared for Karnataka.

The Karnataka government challenged the High Court direction by contending that elections ought to be held to 243 wards instead of the 198 wards of BBMP as directed by HC. According to the State, the effect of Karnataka Municipal Corporation Third Amendment Act, 2020, (Amendment Act), which increased the number of wards to 243, will apply to the elections.