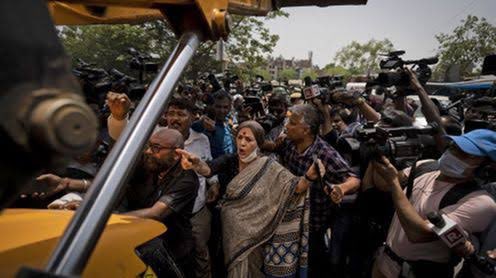 An affidavit has been filed before the Supreme Court by Brinda Karat, Politburo member of the Communist Party of India (Marxist) and former Rajya Sabha MP, in her petition challenging the demolition drive initiated by the North Delhi Municipal Corporation in the riots-hit Jahangirpuri area.

Karat has stated that the demotion drive using bulldozers was only a malafide exercise of power targeting particular minority community, under the guise of removal of encroachment.
"It was a malafide action at the dictates of the political party which governs the Municipal Corporation," Karat has said.
The petitioner has pointed out it is on record that the President of Bharatiya Janata Party Delhi State Committee, the political party which governs the North Delhi Municipal Corporation had issued a letter to the Mayor of NDMC stating that on 16th April, 2022 on the occasion of Hanuman Jayanti some people pelted stones and committed rioting on the procession in the Jahangirpuri area.
The petitioner has argued that the mayor was instructed that strict action should be taken against 'the alleged rioters' and their buildings should be demolished by the use of bulldozers at the earliest.
The petitioner has argued that the Municipal authorities and the Police resorted to inhumane and illegal bulldozing and demolition of buildings of poor people of Jahangirpuri Block-C out of sheer malafides under the guise of removal of encroachments.
Karat has stated that after she was informed about Supreme Court's status quo order she had rushed to the demolition site in Jahangir Puri where the demolition of the buildings was being carried out with full vigour, and the police and municipal authorities were unwilling to stop the demolition.
She has stated that the demolition was stopped only at about 12.25-12.30 PM after she put up a stiff resistance and displayed the communication from her counsel regarding the interim order passed by the Court.
The petitioner has stated that it was formally communicated to the Mayor / Municipal authorities and the police by one of the counsel appearing in one of the connected matters that a status quo order has been passed by the Apex Court.
The petitioner has submitted that the demolition' of the buildings of poor people was carried out without prior notice as required under the statute and without giving reasonable time to show cause against demolition.
"They were not given an opportunity to show that they have not encroached upon any public space and or their buildings are not unauthorized illegal construction and that they have been in occupation of the buildings for eking out their livelihood for around 40 years," the petitioner has said.
Karat, in her petition has sought to set aside the communication issued by the NDMC Assistant Commissioner to the Police seeking police assistance for the demolition drive on April 20 and 21. Also, the petition seeks to restrain the authorities from carrying out further demolition actions without following due process of law and seeks adequate compensation to the victims of illegal demolition.
Supreme Court's bench led by the Chief Justice of India had on April 20th passed a status-quo order on the demolitions after an urgent mentioning was made in a petition filed by Islamic scholars organization Jamiat Ulama-i-Hind.
A bench comprising Justices L Nageswara Rao and BR Gavai had on April 21st extended the status quo order and had issued notice to the NDMC and sought its counter-affidavit.
The Bench also issued notice to the Union of India and the States of Madhya Pradesh, Uttar Pradesh and Gujarat on another petition filed by Jamiat Ulama-i-Hind against the authorities in different states resorting to demolition of houses of persons accused in crimes.
The bench had directed the petitions to be listed again after two weeks.
Case Title: BRINDA KARAT vs NORTH DELHI MUNCIPAL CORPORATION & ORS., WP 294/2022