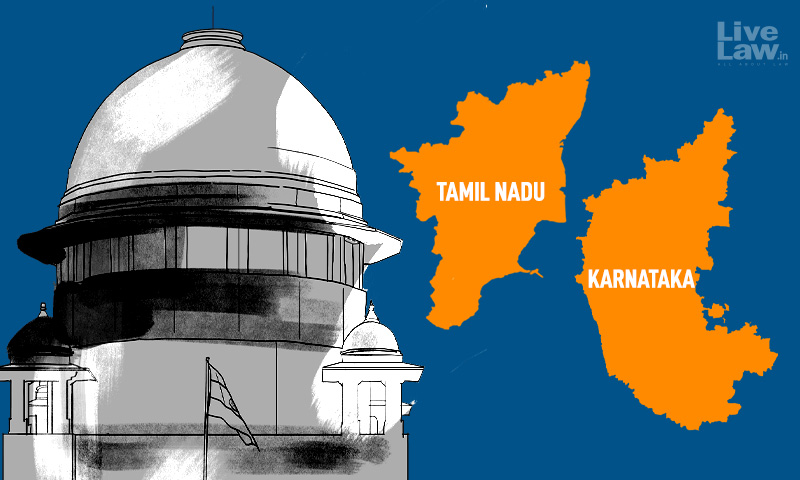 While hearing a plea filed by the State of Tamil Nadu seeking urgent directions to restrain the Cauvery Water Management Authority (CWMA) from deliberating the proposed construction of reservoir at Mekedatu across the inter-state river Cauvery by the State of Karnataka, the Supreme Court, on Wednesday, adjourned the matter till 26th July, 2022 asking the Secretary of the Cauvery Water Management Authority to be present before it.

Senior Advocate, Shyam Divan representing State of Karnataka appearing before a Bench comprising Justices A.M. Khanwilkar, A.S. Oka and J.B. Pardiwala, assured it that they would request the proceedings before the CWMA scheduled for Friday (22nd July) to be postponed until the Bench takes up the matter on 26th July, 2022 (Tuesday).

"There is a sharing of the water. Now the problem is that Karnataka wants to create a reservation at a point higher than where I am to get water, that place is Biligundlu. They want to impound water at Mekedatu which according to us will impact supply to me. That is my grievance."

He also challenged the authority of the CWMA, which he submitted was merely an authority established to implement the order of the Tribunal dated 05.02.2007 modified by the Apex Court on 16.02.2018, to deliberate upon the project report for setting up a reservoir proposed by the State of Karnataka.

Mr. Divan argued that the application by the State of Tamil Nadu was a 'misconceived application'. He added that by the order of the Apex Court, Karnataka is duty bound to deliver 177.25 TMC of water to Tamil Nadu and if the same is not affected, then they should be able to go ahead with the reservoir project, subject to requisite permissions.

"What we do with the water that falls within the territory of Karnataka is under entry 17 List II, for that a project is to come up within the State of Karnataka. In no manner it would impact the order of this Court."

Justice Khanwilkar pointed out that the issue to be considered is whether the CWMA has the authority to deliberate on the project report.

"Whether this authority has jurisdiction is the question."

Referring to Clause 10(1) of Cauvery Water Management Scheme, 2018, which delineates the powers, functions and duties of the Authority, Mr. Divan submitted that supervision of operation of the reservoir, squarely, falls within its remit.

"10. Powers, functions and duties of the Authority.—(1) The Authority shall exercise such power and shall discharge such duty to do any or all things necessary, sufficient and expedient for securing compliance and implementation of the Award of the Tribunal as modified by the Hon'ble Supreme Court vide Order dated the 16th February, 2018 including:

(i) storage, apportionment, regulation and control of Cauvery waters;

(ii) supervision of operation of reservoirs and with regulation of water releases therefrom with the assistance of Regulation Committee;

(iii) regulated release by Karnataka, at the inter-State contact point presently identified as Billigundulu gauge and discharge station, located on the common border of Karnataka and Tamil Nadu."

As Mr. Rohatgi submitted that the hearing before the CWMA has been pending for two years, Justice Khanwilkar stated -

"If it is pending since 2018, it can wait till next week. What is the difficulty? Instead of these piecemeal submissions, we can hear and pass orders next week."

"Discussions can take place, but the authority will not record deliberation till Tuesday (26th July)."

While adjourning the matter, the Bench felt that a representative of the CWMA should be present to assist the Court in the matter, on the next date of hearing.