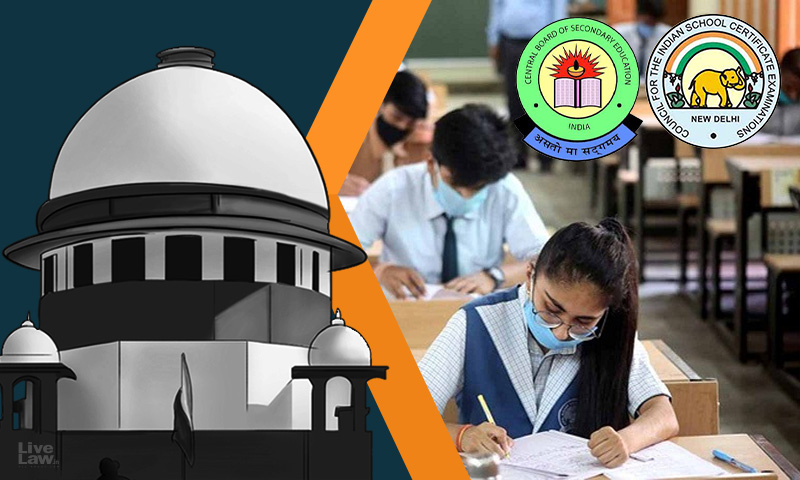 Supreme Court has on Monday adjourned to Thursday, the plea filed for cancellation of CBSE and ICSE class XII exams, after being informed by Attorney General that government will take final decision in next two days. The Bench observed that if Centre decides to depart from previous year's policy, it needs to give good reasons, as last year the decision was taken after...

Supreme Court has on Monday adjourned to Thursday, the plea filed for cancellation of CBSE and ICSE class XII exams, after being informed by Attorney General that government will take final decision in next two days.

The Bench observed that if Centre decides to depart from previous year's  policy, it needs to give good reasons, as last year the decision was taken after good deliberation.

The matter was adjourned after Attorney General appearing for Union of India informed the court that the government would take final decision within next two days, and sought time till Thursday to come back with the final decision.

"We were hoping you'd give us time till Thursday, and we will come back with final decision." AG said

The Bench clarified that it has no difficulties if the government takes its decision. However, if it departs from its previous year notification, good reasons need to be given, so the Court can examine that.

"We don't want to get into nity grities at this stage, but there's hope on part of petitioners that last years policy could be used this year. So you need to give tangible reasons." the Bench orally observed.

The Bench, therefore, decided to hear the matter on Thursday making note of the request by the Attorney general seeking time till Thursday as the competent authorities are examining all aspects of the matter and is likely to take a principled decision which will be placed before the Court.

A division Bench of Justices AM Khanwilkar and Dinesh Maheshwari took the matter for hearing, after having adjourned it on Friday noting that the petitioner had not served advanced copy on the standing counsel for the CBSE. The bench had therefore asked the petitioner to serve the advance copy on the counsel for Central Agency, CBSE, and ICSE and the Attorney General.

The present plea filed by Advocate Mamta Sharma sought directions for setting aside the Notification dated 14th,16th and 19th April 2021 issued by CBSE and Council for the Indian School Certificate Examination only in respect of clauses dealing with the postponement of the Class XII examination

The direction has been sought to the Centre, Central Board of Secondary Education and the Council for the Indian School Certificate Examination.

The petitioner sought similar directions as passed by the top Court Court in the matter of Amit Bathla & Anr. V. CBSE & Ors. (2020), in similar circumstances caused to Covid - 19 pandemic India to meet out the hardships of the innocent school children of Class XII of CBSE and ICSE.

The Apex Court through that judgement had directed the computation and declaration of the result of class XII students on the basis of their earlier grading as their main final examination had been postponed and could not be conducted due to unprecedented situation caused by the pandemic.

The plea stated that CICSE/ CBSE had already, through their circulars dated 26th June and 13th July 2020, accepted and admitted the severe situation of covid 19 and partly accepted the judgment of the Supreme Court passed last year for the present academic session of 2020-2021 in respect of class X students. This has been done by issuing the directions not to conduct their fresh final examination and adopting the criteria of declaring the result on the basis of their earlier internal grading.

However, according to the petitioner, for the innocent students of class XII, "step-motherly arbitrary, inhuman direction" have been issued to postpone their final examination for an unspecified duration instead of following the directions propounded and accepted by them last year.

The petitioner enrolled as an advocate with Delhi Bar Council stated that she was approached by the minor students of Class XII approached, and filed the petition on their behalf, as their claim is genuine and to protect their fundamental rights of education under article 14 and 21 of the Constitution of India.

The plea also argued that in view of the unprecedented health emergency and rising numbers of the Covid -19 cases in the Country, the conduct of examination, either offline/online/ blended in upcoming weeks is not possible and delay in the examination will cause irreparable loss to the students as time is the essence in taking admission in higher education courses in foreign universities.

"As per the UNESCO statistics for the year 2018 around 7.3 lakh students had opted for foreign universities to pursue higher education. Delay in the declaration of result will ultimately hamper one semester of the aspiring students as admission cannot be confirmed until the result of Class XII is declared." the plea stated.

According to the petitioner, it cannot be legitimately expected from the respondents to remain a mute spectator over the current situation and not to take a timely decision in respect of examination and declaration of result of more than 12 lakh students of class XII.