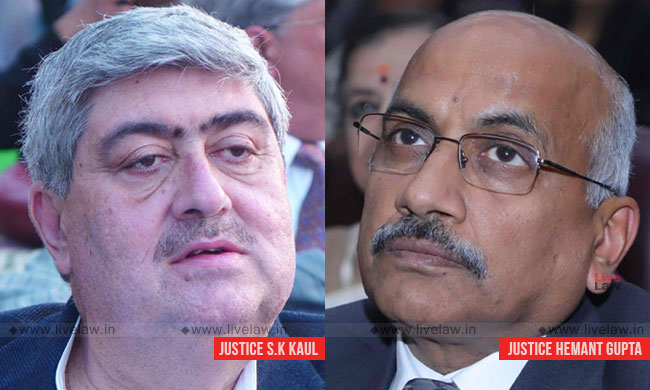 The Supreme Court this week granted two weeks time to Union of India and States for providing information as regards to the pending vacancies in District and State Consumer Redressal Commissions across India under the suo moto proceedings initiated by the Court in February this year.A division bench comprising of Justice Sanjay Kishan Kaul and Justice Hemant Gupta vide order dated 22nd...

The Supreme Court this week granted two weeks time to Union of India and States for providing information as regards to the pending vacancies in District and State Consumer Redressal Commissions across India under the suo moto proceedings initiated by the Court in February this year.

A division bench comprising of Justice Sanjay Kishan Kaul and Justice Hemant Gupta vide order dated 22nd February 2021 registered a suo moto proceedings with regards to the "inaction of the governments in appointing the President, Members and respective staff of various District and State Consumer Disputes Redressal Commissions across India."

The Court also took note of the information regarding the vacancies in such State and District forums with regards to the information made available on the website of National Consumer Disputes Redressal Commission as reflected on 30th November 2020.

The Bench while expressing its surprise on the said vacancies, also went ahead to observe thus:

"The surprising part is that the position vis-a-vis different States is anterior in time i.e. in some States it is updated to October, 2020, while in some States it is as far back as 2014. This is something which cannot be countenanced as the States should be upgrading and informing the National Commission website about the vacancy position existing as on date, more so, in view of Section 17(1)(d) of the Consumer Protection Act, 2019 which assigns the task of overseeing the issue of functioning of the State Commissions and District Commissions to the National Commission."

In view of this, the Court sought response of the Union of India and State Governments on aspect of providing information as on 1st March 2021 regarding vacancy positions and grated two weeks time to all the States for sending such information to National Commission. The Bench also directed that States must also specify the vacancies which are going to arise in the next six months from that date.

During the course of hearing dated 12th April, the Bench while expressing it's regret on the failure of Union of India and States for not filing their respective response in the matter, granted further time of two weeks, failing which the Secretary and Chief Secretary of Centre and the States respectively would be called by the Court to explain the position under its affidavit.

"We can hardly be expected to coordinate between the officers and the legal department of the Union of India, but all we can say that we will not show any further indulgence and specific queries must be met with specific answers in terms of our order." The Court observed at the outset.

The Court also directed the States who have not answered the questionnaire framed by the Amicus to ensure that they are also answered within a period of two weeks.

Senior Advocate Gopal Sankaranarayanan, along with Advocate Aditya Narain, is the Amicus in the matter.

While initiating the suo moto proceedings, the following information was also sought by the Apex Court:

1. In view of the new Act of 2019, some of the States have notified the amended Rules for recruitment while others have not. Insofar as the States who have not notified the Rules, they should indicate the time period within which the new Rules will come into force.

2. The States which have notified the Rules should inform as to within how much time will process for all the existing and prospective vacancies for a period of six months will be completed. This information should also be furnished by the States which have not framed the Rules by specifying the time period within which the rules will be framed (as aforesaid) and the time period within which thereafter their selection process will be completed.

3. The Central Government to inform whether any legislative impact study was completed before bringing in the new Act of 2019 and to place the said study before this Court.

5. There is also a shifting of pecuniary jurisdiction by increasing the jurisdiction of the District and State Forum. This would result in transfer of a large number of cases to these two foras. Thus, the legislative impact study ought to have taken this into consideration as to what are cases which are likely to be shifted.

6. The two aforesaid aspects should have formed a part of the legislative impact study to see as to what are the quantum of cases the Tribunals at different levels will be faced with not only now but in the reasonable time frame for the future.

7. There should have been analysis both at the State level and the National level of the number of foras which are required to deal with the increase in the financial jurisdiction and the expanded legal area of jurisdiction.

8. We are also informed that in some of the State where rules have been notified there are problem of composition of the selection committee as the committee has to be chaired by the Chief Justice or his nominee. It is stated that at least in the States of Bihar and Uttarakhand the nomination by the Chief Justice is awaited. We are sure that in all States the respective Chief Justices will take care of the situation where a request has been so made.

9. There is also an issue of appropriate infrastructures. These are Consumer friendly institutions which have to deal with public. There should be not only sufficient number of presiding officers but support staff for the presiding officers which will include proper Court rooms, supporting staff, stenographers etc. and facilities for the incoming public and lawyers who attend to these proceedings.

10. We also call upon the States to file with their reports, the photographs of the existing infrastructure.

11. Learned Amicus have pointed out that they have annexed a questionaire dealing with both the vacancy position and infrastructure which would facilitate them to analyze the same. He submits that this questionaire can be a further tweaked in view of the orders passed today and the needful will be done and circulated to the State and the Union Government within a period of one week from today so that they respond accordingly as per the questionnaire.

12. We may notice that insofar as the National Commission is concerned, learned ASG submits that endeavour has been in progress to fill up the six vacancies and the matter is with the ACC. On our query, we are told that it is with the ACC from July, 2020! This is hardly expected at the apex level as it creates a cascading effect down which does not speak well of the institution. We expect due care to be taken in this behalf so that at least these vacancies are filled up by the time we take up these proceedings on the next date.

Title: In RE: Inaction of the Governments in appointing President and Members/ Staff of Districts and State Consumer Disputes Redressal Commission and inadequate infrastructure across India v. Union of India & Ors.