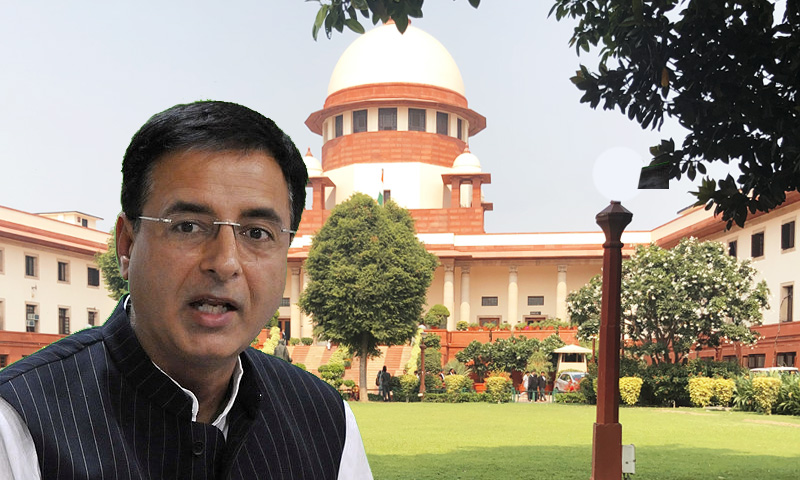 A writ petition has been filed before the Supreme Court challenging the Centre's decision to extend the tenure of the Directors of the Central Bureau of Investigation (CBI) and Enforcement Directorate (ED) up to 5 years. Originally, the term of CBI and ED heads is 2 years. "Extension of Tenure, in this adhoc and episodic fashion, in fact reaffirms the control of the Executive...

A writ petition has been filed before the Supreme Court challenging the Centre's decision to extend the tenure of the Directors of the Central Bureau of Investigation (CBI) and Enforcement Directorate (ED) up to 5 years.

Originally, the term of CBI and ED heads is 2 years.

"Extension of Tenure, in this adhoc and episodic fashion, in fact reaffirms the control of the Executive over investigative agencies and is directly antithetical to their independent functioning," the plea filed by Congress leader Randeep Singh Surjewala through Advocate Abishek Jebaraj states.

It adds that the impugned decisions are designed to defeat a judicial pronouncement.

Reliance is placed on the Supreme Court judgment in Vineet Narain v. Union of India, (1998) 1 SCC 226, which categorically dealt with the need to ensure fixity of tenure for the Director, CBI.

It is stated that the impugned decision of the Government is also in teeth of the judgment in Common Cause v. Union of India and Ors., where it was held that the extension of tenure of ED Director shall only be in rare and exceptional cases and only for a short period of time.

The President of India had, on November 14, promulgated two Ordinances to allow the said extensions.

This development came ahead of the expiry of the term of the incumbent ED Director Sanjay Kumar Mishra on November 17. Last year, the Centre had retrospectively amended his appointment order issued in 2018, which had given him a term of 2 years, to give him an additional one year term.

"These Ordinances go against the aforementioned rulings that give much-needed stability to the tenure of Director of Enforcement and the Director, CBI to protect them from political interference," the plea states.

"Fixity of tenure has been repeatedly held to be an essential element in ensuring the independent functioning of government officials. A piecemeal extension system, as envisioned by the Impugned Ordinances and Notification, creates a perverse incentive for officials to serve at the pleasure of the Government."

The Petitioner has contended that there is no defensible reason to promulgate the Impugned Ordinances and the accompanying Notification, barely fifteen days before the Parliament is set to convene.

"The Ordinances provide no reasons - especially reasons in support of public interest - for the insertion of these provisions...These investigative agencies were created to serve the public but with these amendments they are being subordinated in a clear and malicious fashion to serve the will of the Executive," the plea avers.

It is further pointed out that the impugned decision is also in direct contravention of the recommendations suggested by the Independent Review Committee constituted in 1997, which recommended that the Director, CBI should have a minimum tenure of 2 years, and that a "change in the existing Tenure Rules [is] not recommended."

The Petitioner has thus urged the Court to set aside the impugned Ordinances.

It is submitted that the impugned Ordinances are open to judicial review on the ground of "frivolous misuse of the Ordinance route to bypass Parliament", based on the observations of in the case of DC Wadhwa v. State of Bihar, AIR 1987 SC 579.

The Petition is drawn by Muhammad Ali Khan, Omar Hoda and filed through Abishek Jebraj.