"He Is Alleging that The Attorney General For India Is Guilty Of Bench Fixing": Read The Courtroom Exchange In Char Dham Road Project Case 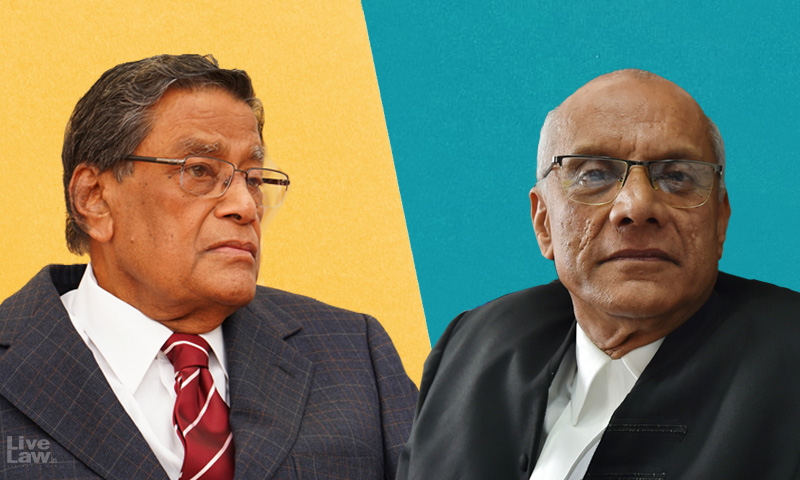 x
The Bench headed by Justice Vineet Saran has directed the Registry to place the papers before the Chief Justice of India for assignment of appropriate Bench to hear this matter.

TheSupreme Court vacation bench headed by Justice Vineet Saran on Thursday required the papers in the Char Dham matter to be placed before the CJI for assignment to the appropriate bench."The AG has submitted that because strategic border roads are to be constructed, the matter is urgent and should be taken up early. The request for further adjournment is accepted to the extent that the matter...

TheSupreme Court vacation bench headed by Justice Vineet Saran on Thursday required the papers in the Char Dham matter to be placed before the CJI for assignment to the appropriate bench.

"The AG has submitted that because strategic border roads are to be constructed, the matter is urgent and should be taken up early. The request for further adjournment is accepted to the extent that the matter be listed on Tuesday and the papers be placed before the CJI for assignment of the matter to appropriate bench", ordered the bench.

On Tuesday, the petitioner had prayed for a three weeks' adjournment on account of COVID, which was strongly objected to by the Centre.

It may be noted that last year, the Centre had moved an application for the modification of the order dated September 8, 2020 which was passed by a three Judge Bench headed by Justice Rohinton Nariman, in order to permit the Union of India to make roads with 10 mtrs tarred surface as opposed to the 5.5 mtrs as ordered by the Court. On Tuesday, the AG told the vacation bench, "By the original order of Justice Nariman's bench (of September 8, 2020), they have refused to permit us to broaden the roads. But that is on the basis of a 2018 notification issued by the Ministry of Roads which said that the width should be 5.5 m. That notification mentions 'hilly areas' generally. Thereafter, the Ministry of Roads has amended its notification on December 15, 2020. The amended notification says that so far as the roads for defence purposes, which go right up to the Chinese border, are concerned, we have to broaden the roads to 7 m. It says that width has to be 7 m with 1.5 m paved shoulder on either side"

The vacation bench, also comprising Justice Dinesh Maheshwari, had on Tuesday asked SG Tushar Mehta to prepare a convenience compilation of all previous orders and relevant applications and documents in the matter so as to enable the vacation bench to ascertain what the orders say and if there is any interim stay on any construction activity.

When the matter came up on Thursday, AG K. K. Venugopal voiced his objection to a written note filed by Senior Advocate Colin Gonsalves, for the petitioner-organisation 'Citizens for Green Doon', praying that "the matter be placed before the regular bench for the reason that the Union of India is engaging in the most unfortunate activity of Bench avoidance". It was contended by Mr. Gonsalves that when the bench headed by Justice Nariman was ready to proceed with the hearing in the matter, the Centre had sought adjournments and now it is pressing that the matter is urgent and needs to be heard expeditiously. He also countered the Centre's submission that the instant issue involves questions of national security and concerns roads on the Indo-China border. He urged that the matter has nothing to do with "strategic border roads".

The following is the court-room exchange as it transpired on Thursday:

"I am appearing for the Union of India. I strongly object to the statement in the written submissions filed by the petitioner that...", began the AG.

"We told you not to file any written submissions. We had requested you that whatever papers you want to rely upon maybe given to the SG so that he can add it in his convenience compilation", said the bench.

"There was no time at all. Originally, Your Lordships had set the hearing for Friday but it came to Thursday. At night, there was no time at all to share it. The court proceedings finished and then I was not in a position to get all those documents and give them to the SG in a night. So I extracted a note from the documents and that I sent last night", explained Mr. Gonsalves.

"You were not required to share anything. We had asked you to only tell the SG what papers you want to rely on, that should be there, so that he can include them in his convenience compilation. We only want to know about the documents already on record because we cannot wade through the records", the bench told the senior advocate.

"I have placed everything on record before Your Lordships...Mr. Gonsalves is always ready overnight whenever he wants to...", said the SG.

"I worked till late last night. I would request Your Lordships' to hear my point of view", pleaded Mr. Gonsalves.

"We had said Friday because that is when we were supposed to sit originally. It was rescheduled to Thursday because of Eid. It was not only you who was put to inconvenience. It was only in the morning at 9:30 that I was informed by my secretary that the matter is today and not tomorrow", said Justice Saran.

"I have no problems with the bench sitting today. It is only that as my papers came from Uttarkashi, putting them together and giving them to the SG would have been an herculean task. So I made a note from those documents", said the senior advocate.

"We don't have that note. When was it sent?", asked the bench.

"It was sent last evening at around 8:30 or 9 o'clock. This morning, I again WhatsApped it...There is a WhatsApp message and an email message. The court master may at once have it if Your Lordships tell him. It is hardly a four-page note", replied Mr. Gonsalves.

"You sent it very late. We got it very late. And only one of us got it. We had not asked you or permitted you to file written submissions. When you had said you will file a written note, we said 'No, you file the documents only'. But, anyway, you have filed this written note...Mr. Solicitor, Mr. Attorney, you also look into this...We will fix this for Tuesday. We will ask the Chief Justice to nominate a bench. We will not list this before us", said Justice Saran.

"Before Your Lordships leave the case, may I make a submission. I have an objection- Please look at the second paragraph in the written note where he says that 'the matter be placed before the regular bench for the reason that the Union of India is engaging in the most unfortunate activity of Bench avoidance'... I was the person appearing for the Union of India! The allegation is that the Attorney General for India is guilty of bench-fixing? In this Hon'ble Court, these are the tactics to get rid of the bench? Such a thing is never done!", advanced the AG.

"Yesterday, the adjournment application said that papers are with the client and the client is not traceable. I knew it was a false statement. Nevertheless, I agreed", added the SG.

"So far as he is concerned, he is compounding his attempt to somehow or the other avoid this case. And they should not be permitted to do this! I take strong objection to this!", continued the AG.

"That is why he wanted to file the written note...Your Lordships may please examine what is the source of inspiration for doing all this when our country is building strategic roads! It is not just public interest but something else!", commented the SG.

The bench proceeded to dictate its order- "The AG has submitted that because strategic border roads are to be constructed, the matter is urgent and should be taken up early. The request for further adjournment is accepted to the extent that the matter be listed on Tuesday and the papers be placed before the CJI for assignment of the matter to appropriate bench"

"We have not said that it relates to strategic border roads. We have only said what the Attorney General has said. We are only saying that the Attorney is saying it is urgent. We have left to the Chief Justice to see whether he wishes to appoint a bench or not, whether it is urgent or not urgent...Leave it at that. The Chief justice will see", assured the bench.

"The Lieutenant General of the army has said on affidavit that he has been at the Chinese border and that they need the roads!", submitted the AG.

"This is totally misleading the Court. This has nothing to do with strategic border roads!", pressed Mr. Gonsalves.

"He says the note came from Uttarkashi? Everything is from lawyers' office! This kind of misleading in the highest court of the country is not done!", contended the SG.

"And they speak of bench-fixing against the Attorney General and the Union of India. This has never been done by any lawyer", said the AG.

"You need something more than just public interest to come to this level! And that too against the Attorney General", pressed the SG.

"We have only sent the matter to the Chief Justice to nominate a bench if he sees fit", said the bench, closing the case.