Concerns on Connectivity, Vaccine Supply And Infrastructure Will Be Taken Up By SC Registry With Centre: CJI Ramana Assures High Courts 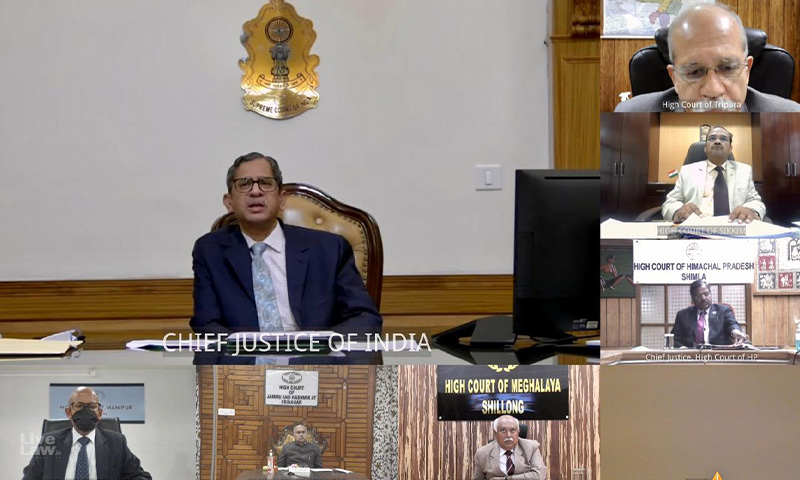 Chief Justice of India NV Ramana has on Friday assured Chief Justices of High Courts that their concerns regarding connectivity, supply of vaccines and the urgent issues of infrastructure that are pending will be taken up by the Supreme Court Registry with the Central Government.

CJI has further assured the Chief Justices of the High Courts that the authorities concerned will also consider their request to get the functionaries of the Courts declared as frontline workers for the purpose of vaccination on priority.

The assurances were made by the CJI during his virtual interaction with Chief Justices of High Courts over four different sessions on 01 and 02 June, 2021, when CJI received a briefing on the functioning of various High Courts and the Subordinate Judiciary across the Country in the wake of Covid-19 pandemic. Justice Ramana also reviewed the incumbent Bench strength and vacancy position in each of the High Courts during the interaction.

During his first live interaction with Chief Justice's after become the CJI, Justice Ramana shared his vision of creation of National Judicial Infrastructure Corporation, for building comprehensive, self-contained, all-inclusive and modern Court Complexes across the Country to augment Judicial infrastructure.

As a follow-up to his letter to CJs of High Courts regarding vacancies, CJI Ramana also re-emphasised the need to expedite the process of filling-up of vacancies, particularly in the High Courts.

The following were some issues considered during the interaction:

Issue of Digital Divide: On consideration of the existing digital divide, it was observed that better connectivity and network in Districts, particularly in rural and tribal areas, would help in increasing the efficiency of the Subordinate Judiciary .

Vaccination Drives And Vaccination Centres: It was observed that while vaccination drives, were satisfactory in High Courts and to a certain extent in District Courts, majority of the lower Courts are still awaiting their turn.

Issues Of Infrastructure: Requests have been made by Chief Justices' to get the impediments removed so as to enable to them to augment infrastructure, and to get the functionaries of the Courts declared as frontline workers for the purpose of vaccination on priority. While highlighting the importance of strengthening the infrastructure, CJI observed that both quality and quantity of justice delivery can be improved only when the support systems are strong enough to meet the challenges.